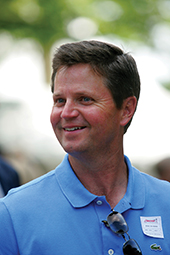 Trainer Al Stall Jr. will judge the Maryland Horse Breeders Association’s 78th annual yearling show for Maryland-bred Thoroughbreds at the Maryland State Fairgrounds in Timonium on June 24. The 50-year-old horseman trained Blame to win the Breeders’ Cup Classic-G1 in 2010 and trains the leading Louisiana-bred of all time, Star Guitar (a winner of 23 of 29 races). During a break from training at Churchill Downs in early May, Stall talked about his assignment with Sean Clancy.


How did it come about?
Little Billy (Boniface) called me. Little Billy, he’s my age, asked me to do it. I knew a little about it from Frankie Brothers, I knew it was prestigious and fun?–?but then I saw the packet they (the MHBA) sent me, looking at the year-by-year, I was like, ‘Oh, gosh, it’s like the who’s who.’ We always have fun when we go back to Maryland, I’m looking forward to it. I like looking at horses and I like going to Maryland, so it’s a good combination.
When did you first start looking at yearlings?
I can’t remember when, I was following (Jack) Van Berg and Tee Red Bernis, in the ’70s I guess, when my father was around, just always did it. I remember Jack because he would take over the show and Tee Red Bernis, he was from Louisiana, he was leading apprentice in America, they thought he was 16, he was 14. He trained, full of red hair, stretched out to about 260 after being an apprentice jock. That had to be in the mid-70s and I’ve done it ever since.
What do you look for?
I know Jack always said start at the bottom, don’t look up, don’t be impressed with a big body because the legs are the most important thing, keep your head down, start from the ground up. I’m like everybody else, just looking for athletes and a blend of the pedigree. I know what sires and dam sires are supposed to look like, grandsires, fourth dams, nowadays. Basic athleticism. I’m usually operating on short grass, money-wise, so I’m trying to find something that’s not the obvious thing. Keep it simple.
Who’s the best you picked out?
I guess J. B.’s Thunder, paid $42,000 for him and won a Grade 1, he’s the best as far as ROI. I haven’t bought a ton of them, I don’t have a lot of action in that department.
Did you see Blame as a yearling?
I saw him on the farm. I would call Blame a typical Arch, brown, not necessarily plain, but marked plain. He didn’t jump off the page at anybody, he didn’t jump off the page at the farm at 2, he just showed himself eventually. We’ve got one over there that reminds me of Blame, a 2-year-old, by Arch, out of a Seeking the Gold mare (as is Blame). He wouldn’t have rung the bell at the sale, but I like him.
Do you feel any pressure?
I hope it’s not pressure, they don’t get mad at you if you knock their horse do they? I hadn’t thought about that, now, you’ve got me worried. I did notice the report card in the pamphlet they sent me, somebody picked Declan’s Moon that one year. I’ll be fine, I’ve been around long enough, I can handle it. It’ll be fun.