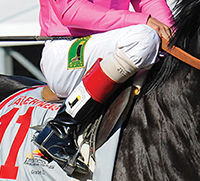 “Turn the engine off honey, I’m going to be awhile.”
Preakness fan in the grandstand, into his mobile phone, while holding a fistful of wagering tickets and a big beer (we’re not sure how long his ride waited)

“That saddle’s as old as the Preakness Stakes.”
Trainer Chad Brown, after putting John Velazquez’s heavy (and old) saddle on Casino Host for the Dixie; the brown leather classic was used by the jockey’s agent Angel Cordero in the 1970s

“They calling us ugly?”
Jockey Javier Castellano, after Pimlico security interrupted an interview by the horsepath for “scaring the horses”

“He’d go to sleep in the paddock if you let him.”
Assistant trainer Sean Crowell,
on placid Chick Lang Stakes winner Il Villano

“He thinks we’re getting paid at 6 o’clock.”
Trainer D. Wayne Lukas, on why he had to stop working James W. Murphy Stakes winner Skyring in company

“I’d be flipping burgers if it wasn’t for Jude Feld.”
Trainer Doug O’Neil about getting his start
with former trainer and now radio host Feld

“You don’t know how big this is; it gets pretty lonely on that farm.”
Monkton, Md.-based trainer
Todd Wyatt, after Share Out upset
an allowance race on Black-Eyed Susan Day

“I’m not trying to get used to it, this won’t last forever. As soon as these races are over, everybody’s going to be gone and I’ll go back to my usual.”
Preakness-winning jockey Mario Gutierrez

“I’m always pretty confident when he rides for me.”
Trainer Chad Brown, when asked if he was confident watching Zagora (Fr) and Javier Castellano in the Gallorette Handicap-G3

“Who rode him?”
Paul Reddam racing manager Jamie McCalmont,
after Unex Dali (GB) won the finale on Preakness Day.
Joshua Navarro replaced Mario Gutierrez, who was busy with a press conference after winning the Preakness

“I can’t believe it.”
Trainer Hugh McMahon, when asked about his success since going out on his own

“The owners were patient and it’s paying off.”
Trainer Flint Stites after Debbie and Stephen Jackson’s
Clare Skies Ahead won an allowance race on Preakness Day

“We thought she was worth $40,000 –
obviously, no one else did.”
Owner/breeder David Hayden on 2011
Maryland-bred champion 2-year-old filly Plum, who failed to reach her reserve as a yearling

“How on Earth do you follow that?”
Carol Kaye, who accepted the Maryland broodmare award for Gabby’s Love after King Leatherbury’s multi-faceted acceptance speech for Horse of the Year Ben’s Cat