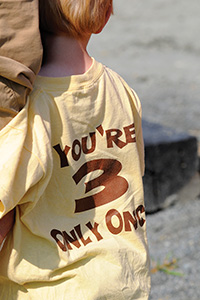 “You’re Only 3 Once.”
Slogan on the Union Rags T-shirt sent to fans before the Kentucky Derby

“They called up asking if Russell Sheldon was open.”
Jocks’ agent Marty Leonard, who represents Sheldon Russell, at the beginning of the Colonial Downs meet (Leonard did not give them the call)

“Well, I don’t know until, until I ride him, but the way he worked the other day, I worked him right behind the other horse, and I’m telling you he was strong.”
Jockey John Velazquez, asked (before the Belmont Stakes) if Union Rags could have any lingering effects from two rough trips

“We had some rails set out in the shedrow and he was fresh and having fun and jumping them well. I’m not kidding. He was ‘this high’ over a jump, and it wasn’t the first time he’d done it.”
Trainer and former Olympic show rider Michael Matz, on how Union Rags would fare as a show jumper
“In the middle of nowhere, actually, but it’s pretty land and we’re gradually shoving it back in the right direction. Hopefully in another year or two, we’ll be where we want to be. We’re confident enough that we sent out a couple of mares to be bred, we’ll foal them out, but as you might expect, not in Georgia, because that doesn’t make much sense.”
Owner/breeder Loring Heard, about his Georgia Thoroughbred farm

“If you throw him away, he’ll go slower. If you hang on to his head, he’ll go to kingdom come.”
Trainer Jimmy Day, about
Colonial Downs winner New Mambo

“What is Paynter’s last name?”
Robbie Wasserman, 5, playing ‘the Name Game’ (name a horse with the letter P) with his father

“I was on my way to pick up the kids at school and waiting for the sales results to come through on my phone. When it came up as Chadds Ford Stable, I said ‘There’s either been a misprint or. . . Phyllis, what have you done?’ ”
Braxton Lynch, on owner Phyllis Wyeth’s re-purchase of Union Rags at the Fasig-Tipton Florida 2-year-old sale

“I have to tell people that it’s not a big goose.”
Point Lookout Farm’s Juan Martinez, about the resident emu down by the pond

“It’s like a Disney movie now. He’s back home, he’s got all these mares and 40 acres and he’s king of the hill.”
Andy Carter, about his former trainee, the 8-year-old gelding Whistle Pig, being retired at his birthplace, Sylmar Farm, in Christiana, Pa.

“We had seven foals of 2011 – it was a very light year because the previous year it seemed like every mare was foaling really late. Then we either didn’t breed them or we bred them once and they didn’t catch. We have 16 foals – 16 February foals – this year.”
Katy Voss, on recent foal crops at Chanceland Farm

“Your colt just showed himself well. He walked beautifully and presented himself well and showed a lot of class.”
Al Stall to Voss and Bob Manfuso, after naming their colt grand champion at the Maryland Horse Breeders Association Yearling Show