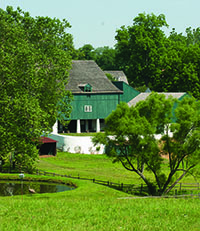 "Union Rags joined a group of three other youngsters at Point Lookout under the watchful eyes of [Phyllis] Wyeth and [Juan] Martinez. They treated him like the rest—cool nights in a big field on the other side of the railroad track and along the Brandywine River, warmer days in the airy corner stall that now bears his photograph on the door, plenty of hay baled from the surrounding fields, lots of time to grow and learn and thrive."

It was announced yesterday that Gr. 1 Belmont Stakes winner Union Rags will enter stud next year at William S. Farish's Lane's End Farm. Read about Pennsylvania's Point Lookout Farm, where this brilliant racehorse got his start, in our August issue.

Subscribe to our digital edition for only $20 or order a print subscription if you prefer. Click here.