Once again, the Breeders' Cup proved decisive in the voting for top Midlantic-bred of the year, as a victory in the Breeders' Cup Turf Sprint propelled Caravel to the top of the charts as the top Midlantic-bred of 2022 in voting for the year’s final Mid-Atlantic Thoroughbred/The Racing Biz Top Midlantic-bred Poll.
The Pennsylvania-bred daughter of Mizzen Mast enjoyed success throughout the year, with five stakes wins at four tracks from eight starts. The exclamation point on the season came in the Turf Sprint, which she won in gate-to-wire fashion at 42-1. She became the sixth Pennsylvania-bred to win a Breeders' Cup race, joining Go For Wand, Tikkanen, Alphabet Soup, Finest City, and Shamrock Rose.
For the fifth consecutive year, the horse voted Top Midlantic-bred earned the honors in part by winning a Breeders’ Cup race.
“The depth and quality of Mid-Atlantic breeding programs really is incredible,” said The Racing Biz owner and publisher Frank Vespe. “It’s exciting to see these horses competing at the very top of the sport.”
Caravel raced for breeder Lizzie Merryman in her first eight starts. She won two stakes races as a 3-year-old at Presque Isle Downs in 2020 and finished third in the Hilltop at Pimlico. 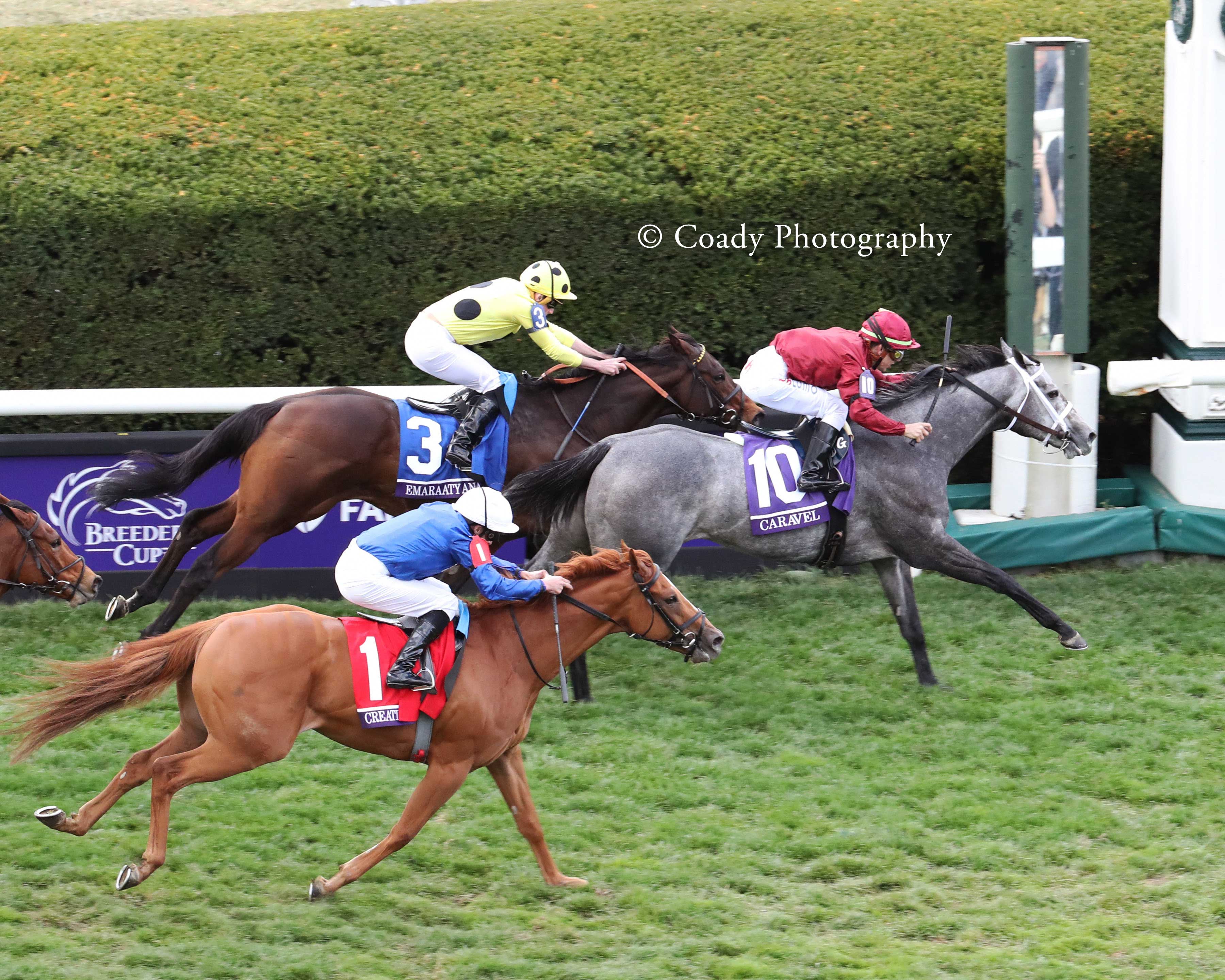 "She showed a lot of promise from very early on." said Merryman. "When she was a baby, she was so good-looking and athletic. I had Danielle Hodsdon gallop her as a 2-year-old, and we'd talk about her every day. Danielle galloped (champion turf mare) Forever Together, and she'd tell me, 'This filly reminds of Forever Together.'"
It was as a four-year-old, though, that Caravel really blossomed, winning three consecutive stakes. After the second of those, which was her fourth career stakes victory, in the Goldwood Stakes at Monmouth Park in June 2021, Merryman sold a 75% interest to Bobby Flay, transferring the horse to trainer Graham Motion as part of the sale.
Caravel made one more start in Merryman’s barn, earning her first career graded stakes win with a 2 1/2-length win in the Caress-G3 at Saratoga. She then made three starts in Motion’s barn, a third in the Grade 1 Highlander at Woodbine the best of those.
At the Fasig-Tipton Kentucky Fall Mixed Sale in 2021, Caravel sold for $500,000 to Qatar Racing, Marc Detampel, and Madaket Stables, who transferred her to the barn of Brad Cox. Cox previously trained Knicks Go, the top Midlantic-bred of 2020 and 2021.
Caravel started her season with a win in the Queen Stakes at Turfway Park on Mar. 19. Two starts later, she won her second career graded stakes in the Intercontinental-G3 at Belmont Park on June 10. After an off-the-board finish in her bid to repeat in the Caress, Caravel bounced back to take the Smart N Fancy at Saratoga on Aug. 20. She finished fourth in her return to her home state in the Presque Isle Downs Masters-G2 on Sept. 19, but then rebounded to win the Franklin-G3 at Keeneland on Oct. 16, her final start before her Breeders' Cup upset.
"It was pretty incredible." said Merryman of Caravel's Breeders' Cup victory. "After Saratoga, she really blossomed, trained well, put on a lot of weight, but she hadn't yet shown she could hang with males. She proved it there. She ran great.”
In December, Merryman received the John Deere Award from the Breeders' Cup, which emphasizes the contributions of breeders to the program.
"I can't help but think about how proud my parents (John and Kitty) would be." said Merryman. "My dad was so passionate about breeders and breeding, so this is all a tribute to him and what he instilled in all of us."
Pennsylvania-breds took four of the first five spots in this year's survey. Just One Time, the winner of the Madison-G1 at Keeneland in April, finished second after leading the poll most of the year. Five-time stakes winner Fortheluvofbourbon placed fourth, while Morning Matcha, who won the Main Line at Parx in March and was graded stakes-placed three times, finished fifth.
“Breeders all over the region are breeding outstanding horses,” said Cricket Goodall, executive director of the Maryland Horse Breeders Association, which publishes Mid-Atlantic Thoroughbred. “It’s important to take a moment to reflect on and celebrate those achievements.”
Sandwiched in between was Maryland-bred Fille d'Esprit, who finished third. Claimed for $10,000 two years ago by C J I Phoenix Group and No Guts No Glory Farm, the Jerry Robb trainee had a busy campaign, winning five stakes races from 13 starts. She was stakes-placed an additional five times, including a third-place effort in the Barbara Fritchie-G3 at Laurel Park in February.
Of the top 10, four were Pennsylvania-breds, four were Maryland-breds, one -- two-time stakes winner and Charles Town Classic-G2 runner-up Muad'dib -- was West Virginia-bred, and one -- Brookmeade winner Mo Clare's -- was Virginia-bred. The top ten was evenly split between males and females, with female horses claiming four of the top five spots.
The monthly Mid-Atlantic Thoroughbred is the only publication devoted to Thoroughbred breeding and racing in the Mid-Atlantic region. The Racing Biz, an online publication, is the independent voice for mid-Atlantic racing and breeding.
The poll is conducted of media members and others involved in the Thoroughbred industry and restricted to horses that have run in 2022 and were bred in Pennsylvania, Maryland, Virginia, West Virginia, New Jersey, Delaware, and the Carolinas.
TOP MIDLANTIC-BREDS OF 2022
1. Caravel (PA), 5M by Mizzen Mast-Zeezee Zoomzoom, by Congrats; bred by Elizabeth Merryman and trained by Brad Cox for Qatar Racing, Marc Detampel and Madaket Stables LLC. 2022 highlights: Won G1 Breeders’ Cup Turf Sprint, G3 Intercontinental, G3 Franklin S., Smart N Fancy S., Queen S. Prior poll: 2nd.