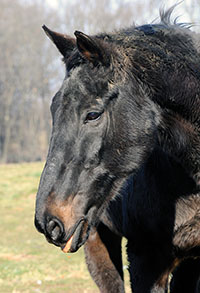 There was no torch-passing, but you could feel it as the oldest living Eclipse Award winner Lord Avie died in late December at 34.
The former champion and pensioned sire died in his paddock at Blue Ridge Farm in Upperville, Va. To the north 160 miles, four-time steeplechase champion Flatterer took his place while standing in a paddock at owner/breeder Bill Pape’s My Way Farm in Unionville, Pa. Now 34, Flatterer takes up the honor of being Thoroughbred racing’s most senior champion.


Lord Avie and Flatterer probably never crossed paths–unless Pape and trainer Jonathan Sheppard had their future star at Saratoga as a 2-year-old in 1981, the year Lord Avie finished third in the Grade 1 Travers–but they’ll be forever linked now.
“Too bad, I had just read something about him too,” said Pape when informed of Lord Avie’s passing. “I know how that feels. It’s tough on you when they go, no matter how old they are.”
As for Flatterer, Pape put it best when he said “the old dude is in good form.” The Hall of Famer shares a field with retired broodmare My Tombola (she’s 24) and looked healthy and vibrant during a cold afternoon visit in January. Predictably furry with a winter coat, the Pennsylvania-bred carried plenty of weight, moved agreeably for a photograph and lapped up the attention. There’s a shed in the field, but he and his companion spend most of their time outside, watching the world go by and listening to the sounds of the countryside–mainly geese, cows and roosters. Flatterer is still a dark, dark bay with a lighter bay muzzle. He’s got a soft, warm eye though there are some gray hairs on his jaw and some white hairs on his left front shin.
“He does well for his age,” said Pape, who bred the horse with Sheppard. “He’s got a light blanket he wears in the spring and fall and a heavier winter blanket for the cold. He’s living a pretty good life.”
Pape laughed about a recent encounter with some deer at My Way. The visitors galloped through the farm, jumping fences and drawing attention from the equine residents. Like the others, Flatterer and My Tombola got a little stirred up and circled their field with gusto. Twenty-five years removed from his last race, Flatterer normally moves like his owner, steady but nice and slow. Not that day.
“He was having fun with it, you could tell,” said Pape. “He showed a whole new gear. I think he’d been laying in the weeds on us, saving it up.”
Foaled in 1979, the son of Mo Bay made his career debut on the flat at Aqueduct in 1982. He won three Pennsylvania-bred races at Keystone that year and won a claimer at the Meadowlands as part of an 18-start campaign. In 1983, he won his first jump start–launching a string of four consecutive championships at ages 4-7. Flatterer won four Colonial Cups, carried 176 pounds to victory at Radnor in 1986 and twice finished second in international championship hurdle races–French in 1986 and English in 1987. He earned $538,708 and was inducted into Thoroughbred racing’s Hall of Fame in 1994.
Barbara Curtis is responsible for Flatterer’s daily care, and he gets fed twice a day–sharing (somewhat ami-cably) his grain and corn with My Tombola.
“He’s a very sweet, dear old man and I’m very fond of him,” she said.
Patricia Ramey said the same thing about Lord Avie, a son of Maryland sire Lord Gaylord who lived at Blue Ridge since 2002. The champion juvenile of 1980 raced for SKS Stable and trainer Danny Perlsweig, winning the Cowdin-G2, Champagne-G1 and Young America Stakes-G1 at 2, and adding the Florida Derby-G1 at 3. He missed the 1981 Kentucky Derby-G1, but returned to finish second in the Grade 1 Haskell and third in the Travers. As a stallion, the Kentucky-bred stood at Spendthrift and Lane’s End in Kentucky, siring 78 stakes winners, including two international champions, $2.5-million earner Cloudy’s Knight and Pennsylvania-bred flat/stee-plechase stakes winner Lord Zada.
In retirement, Lord Avie was visited twice a year by Perlsweig and was cared for throughout by Ramey.
“The best way to put it and it makes me cry to talk about it,” Ramey said a week after Lord Avie died. “He captured my heart. He was just so full of life and was just a wonderful, wonderful horse. Simple little things just made him so happy. I miss him dearly.”
Lord Avie was euthanized in his paddock Dec. 28, a sad day at Blue Ridge but one that did little to diminish anything about the old stallion. Healthy late in life other than some teeth problems, Lord Avie had stopped eating, Ramey said. The end, which came with a last visit from his son Boyce (also retired on the farm), was peaceful.
“It was a beautiful, sunny afternoon; he didn’t suffer and wasn’t in any pain,” Ramey said. “He’d had a couple of bad teeth and we had to pull them a couple of years ago. He went off his feed a little then, but this was different. The look was gone in his eye. He was so alive that you could tell he wasn’t the same. He was tired.” /Joe Clancy