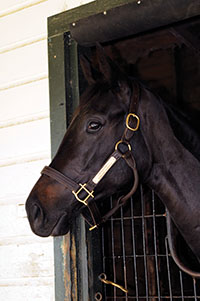 Eblouissante, half-sister to champion Zenyatta, won her first two starts in California for owner/breeder Eric Kronfeld and trainer John Shirreffs. Mickey Preger Jr. broke the 4-year-old daughter of Bernardini in Camden, S.C.–giving the Kentucky-bred a Mid-Atlantic connection. Preger also handled Eblouissante’s dam Vertigineux before her racing career. Preger, son of retired New York trainer Mickey Preger, preps 26 horses from Camden Training Center. Mid-Atlantic Thoroughbred caught up with Preger about what it was like to hold gold in his hands.

MAT: What was Vertigineux like when you had her?

MP: She was a big Kris S. filly, backwards as a baby. We sent her to Tommy Skiffington and got her back and sent her to Michael Dickinson. She didn’t run much but obviously she ended up being a hell of a broodmare.

MAT: What was Eblouissante like when you had her?

MP: I knew I was getting her from the time she was a foal, after Zenyatta’s fame, so there was a lot of build up and anticipation. She was awesome. I don’t care who she was by or who she was related to, she was a different type of horse, just a very special filly, very personable, extremely intelligent, almost like a person. So smart, you would have a set of babies and everything could go everywhere and she would just watch them go. I understand Zenyatta was the same way.

MAT: How often did you communicate with John Shirreffs?

MP: John is just like any other trainer I send horses to, there’s not a whole lot of communication up until the time they leave. He just knew that I was nervous with her the whole time. The filly is worth a lot of money, just having her in the barn every day, just turning her out on a sloppy day, she’d throw her tail up over her back and kick off and you’d be like, ‘Oh God.’ That’s how I felt about it.

MAT: When did she leave and how much had she done before she left?

MP: She left in May of her 2-year-old year (2011). Everybody got to ride her, she’s real easy to deal with, real easy to manage. She was up to galloping a mile and a half before she left, you know the time John puts into them, it doesn’t make any sense to do any more than that with them. My groom, Jonathan Carlos, was in tears loading her on the van, she was just special. She was a lot of fun to have, everybody knew she was here and I didn’t let anybody come to the barn for three or four months to see her because I was nervous. Finally, I understood how easy she was and the attention she was going to get after she left so I let everybody come see her.

MAT: What did you think of her races so far?

MP: Her races haven’t been overly impressive, she’s just done what she’s supposed to do. I don’t think they’ve turned her loose yet.