The Royal Family of Sylmar

You want to know about the Princess? Call the Queen. In the first weeks of the new year, Pennsylvania-bred Princess of Sylmar shook up Aqueduct with runaway scores in the Busanda and Busher Stakes. Trained by Todd Pletcher, she ran her winning streak to four, improved to 4-for-5 lifetime and put herself firmly into any discussions about 3-year-old fillies. 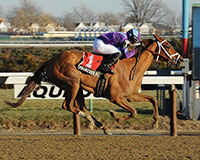 But what’s with the name? The only Sylmar in racing is the Houghton family’s Sylmar Farm. It used to be in Maryland (on Sylmar Road in Cecil County) and now it’s in Pennsylvania (in Lancaster County’s Amish country).
“She’s not our horse, but she was born here, the mare lives here and we broke her,” said Betsy Houghton with a laugh. “People keep calling and giving us a hard time about selling her, but she was never ours to sell. She’s some filly though. We’re all real excited.”
Bred by longtime Sylmar client Ed Stanco and owned by his King of Prussia Stable, Princess of Sylmar nearly didn’t come to be. Stanco’s mare Storm Dixie went to Ashford Stud in Kentucky to be bred to Grand Slam, but he wasn’t available when she was and the farm called Houghton about switching to Majestic Warrior. Houghton told Ashford to go ahead and a year later, Storm Dixie delivered a filly. When it came time to name her, Stanco called Houghton. Again, she gave the OK but with a caveat.
“It’s going to put a lot of pressure on Todd Pletcher,” she said.
Houghton’s husband Ronnie and staff put Princess of Sylmar through the program, and she quickly zoomed to the top of the class on the farm’s small training track, gallops in the fields and hacks in the woods. In typical understated fashion, Ronnie would say the filly “could run a little” though he was careful not to do anything too fast. Princess of Sylmar went to Pletcher’s barn at Belmont Park in August 2012. For the filly’s debut, Pletcher thought small and big at the same time, shipping to Penn National for two starts?–?a fourth in October and a 19-length maiden win in November. The return to Pennsylvania was more than an easy spot; it rewarded Stanco with $29,376 counting purse earnings and state-bred bonuses. From there, she won an Aqueduct allowance in December and then the Busanda and Busher. Bigger stakes await in New York and beyond.
As Betsy said, “I don’t think she’ll be back in Pennsylvania for a while.” Back at Sylmar, Storm Dixie carries a Petionville foal and a yearling E Dubai filly (the Duchess?) gets ready to follow her big sister to the races.