As we have for many years, the Mid-Atlantic Thoroughbred brought home its fair share of awards from Saturday night's AHP Annual Awards dinner.

Winner in the PERSONAL SINGLE COLUMN CIRCULATION UNDER 10,000 class was Josh Pons' article in our coverage of the Maryland-bred Fund 50th anniversary, “Fifty Years On, Visions of Men and Determination” (April 2012). The judge remarked, "The writer dubs this tale a ghost story and couldn't be more correct. It is a haunting glimpse into a state's history and a man's part in it. One need only close his own eyes to see the images the writer conjures, but that would require pausing. Beautifully done." 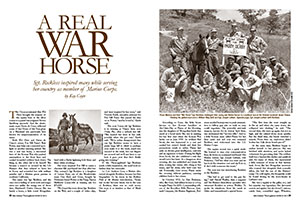 The FREELANCE WRITER EQUINE-RELATED JOURNALISM class was won by Kay Coyte, with her delightful story “A Real War Horse” that she wrote for our March 2012 issue. "The profile was a fun read and well written. The focus was excellent with the sources being allowed to tell the story. Readers can feel the emotion through the words." The same story received honorable mention in the FEATURE SINGLE ARTICLE CIRCULATION UNDER 10,000 (21 entries). 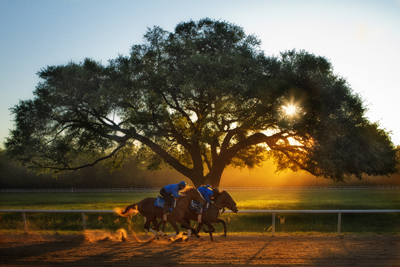 Mid-Atlantic Thoroughbred's Post Time photo from our June 2012 issue, “Morning Glory” won the EDITORIAL ACTION PHOTOGRAPH (22 entries). Photographer Sharon Castro received this praise from the judge, "Thought and effort went into setting up this photo, captured at just the right moment when the sun is coming through the tree as the horses gallop by. It was a gamble that paid off; anything could have gone wrong and the picture would be good but not the same." 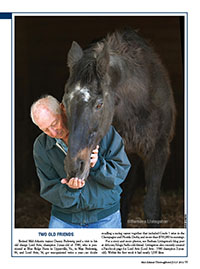 The EDITORIAL HUMAN-ANIMAL BOND PHOTOGRAPH class is always a tough one, with so many heart-warming images, but “Two Old Friends” by photographer Barbara D. Livingston (July 2012 issue) won hands down. Her photograph of Danny Perlswig and Lord Avie evoked this response from the judge, "This image takes my breath away. There is such warmth and companionship portrayed in this simple composition. The dense background gives these two the perfect canvas to emerge from. The focus, color and exposure couldn’t be more stellar; revealing the tactile qualities of the horse’s mane and coat, the man’s skin and hair and the glass like smoothness of the horse’s eye. The positioning of the subjects tells the story of their relationship. This is truly a winning capture."

For Mid-Atlantic Thoroughbred, the evening was topped off with the presentation of the Valiant Human-Animal Bond Award, sponsored by Luitpold Animal Health (makers of Adequan®), to Kay Coyte with "A Real War Horse" published in our March 2012 issue.

Congratulations to all of the Mid-Atlantic Thoroughbred contributors honored with 2012 AHP Awards!