Jumping to the Hall

By Joe Clancy
Marilyn Ketts figured it would never happen. Michael Moran thought he’d be too old to have to worry about a speech.

But both Mid-Atlantic Thoroughbred owners/breeders will be in Saratoga Springs, N.Y., this summer to accept racing’s highest honor–Hall of Fame induction–for legendary steeplechase horses Tuscalee (Ketts) and McDynamo (Moran). The jumpers are part of the 2013 class for Thoroughbred racing’s Hall of Fame, which also includes jockey Calvin Borel and horses Lure, Housebuster and Invasor (Arg). The annual ceremony takes place Aug. 9 at the Fasig-Tipton sales pavilion.

Steeplechase candidates are considered every four years and this year’s inductees bring the equine honor roll to 18. The latest two fit into the storied group–and represent different eras and paths. 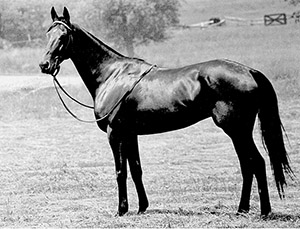 Tuscalee, the seventh Maryland-bred to make the Hall, won more American steeplechase races than any horse in history. His 37 career jump wins top Hall of Famer (and another Maryland-bred) Elkridge, who won 31. Voted champion steeplechaser of 1966 by the Thoroughbred Racing Associations, back before the Eclipse Awards, Tuscalee started at least once a year from 1962 to 1972 for owner/breeder Alfred Smith and trainer Leiter Aitcheson. In 89 career starts, Tuscalee built a following and a reputation for consistently game performances. He won over hurdles and the bigger steeplechase fences, at the racetrack and at hunt meets–often with Aitcheson’s son Joe (a Hall of Famer and seven-time champion) in the saddle.
“Whenever we went to Virginia to run, Daddy would stop at The Carriage House restaurant in Georgetown on the way home,” said Marilyn Ketts, Smith’s daughter. “The maître d’ knew Tuscalee, the waiters knew Tuscalee, everybody asked about Tuscalee.”
In 1959, Smith bought the broodmare Verna Lee (a daughter of British Buddy) at auction, in foal to Tuscany. Her foal, born at Smith’s Blythewood Farm in Upper Marlboro, was Tuscalee. The colt proved bullish early, was gelded, sent to Aitcheson and built a career. He won once as a 3-year-old, twice as a 12-year-old and at least once in every season in between.
His best season came in that championship campaign. He started 13 times in 1966, and won 10 races–including a victory at Fair Hill under 165 pounds and a score at Montpelier under 167–seven of them stakes. Key wins that season included the Midsummer at Monmouth Park, the Georgetown and Tom Roby at Delaware  Park, the Noel Laing at Montpelier, the Fair Hill and Manly at Fair Hill.
On the pedigree side, Verna Lee started a long line for Smith and his family. Four generations later, through Lee Hill, Friendly Hill and Key to the Hill, Cherokeeinthehills finished third in the 2000 Pennsyvlvania Derby-G3, won a Grade 1 stakes over hurdles and earned more than $450,000 for Ketts.
“We had so many horses out of that mare, Verna Lee,” Ketts said. “Most of them weren’t as good as Tuscalee, but they were good, sound horses. They were the crowning glory of my father’s racing involvement.”
After 11 starts as a 12-year-old in 1972, Tuscalee retired to life on the farm as a foxhunter and babysitter to young horses.
“He used to foxhunt with one of my twin daughters, then we used him on the farm with the babies–breaking them and teaching them to gallop,” Ketts said. “He was about 20 and would slow gallop with the babies. He was a good teacher, made them feel real secure about it. We rode him until he was about 25, then he was turned out in a field in full retirement–the local legend.”
Ketts doesn’t recall the exact year Tuscalee died, but the champion is buried on her At Last Farm in Aquasco, Md. Tuscalee had been considered for induction in the past, and got in this time in part because of a change to the Hall of Fame rules. The steeplechase committee had long operated under a rule that limited induction to a single name per category (horse, trainer, jockey). In its discussions this year, the committee proposed a new rule limiting induction to no more than three individuals (no matter the category) every four years. The change opened the gate to two horses this year and brings the steeplechase committee in line with the full Hall of Fame vote.
Ketts had heard talk of Tuscalee’s consideration, but was surprised by the call in late April.
“My father would be absolutely thrilled to death, he’d be very honored,” she said. “I was shocked, thrilled. I knew he was up four years ago, but hadn’t heard anything for a while. It really means a lot.”
McDynamo takes his place

Fittingly, Tuscalee and McDynamo go into the Hall of Fame together. The former won more races than any other American steeplechaser. The latter earned more money than any other American steeplechaser.
McDynamo’s career steeplechase bankroll of $1,310,104 leads all, but he was about far more than money. Based on pedigree, the son of Dynaformer was destined for something big on the flat, and won twice for Moran (who paid $82,000 for the Kentucky-bred as a yearling at Keeneland). Nervous in the stall and worse in the starting gate, McDynamo turned to steeplechasing as a 4-year-old in 2001. He won his debut, a maiden hurdle at Far Hills, N.J., in October for trainer Sanna Hendriks. The powerful bay became a stakes winner the following season. He won his first championship with an unbeaten, three-start campaign in 2003. The Grade 1 triumphs came in the Royal Chase at Keeneland, the Breeders’ Cup back at Far Hills and the Colonial Cup in Camden, S.C.
He won subsequent Eclipse Awards in 2005 and 2006, while consistently racing at the top of the game. Far Hills, annually the richest stop on the steeplechase calendar, became McDynamo’s playground. He won a race there seven consecutive years–the maiden in 2001, a novice stakes in 2002 and the Grade 1 feature (either the Breeders’ Cup or the Grand National) from 2003-’07.
His connections went along for the ride.
“We had serious doubts at the beginning; he was a stall walker, he didn’t have a whole lot of confidence and the gate phobias,” said Moran, son of leading Pennsylvania owner/breeder Betty Moran of Brushwood Stable. “He was given every chance, and look what happened. The beauty to him was he could run on any ground. Top of the ground, bottomless ground, the racetrack, he won pretty much everywhere we took him.”
Hendriks, who still rides the 16-year-old gelding with the Cheshire Foxhounds and cross-country with her children, remembers all of his victories fondly but has a special place for his final win–the 2007 Grand National at Far Hills.
“That was so emotional for me because I was dumbfounded that he could do it again,” Hendriks said. “By then, I’d go up there thinking this could happen or that could happen. I always tried to do the best I could by him and he certainly came through for me. I was so nervous about letting him down.”
Regional Connections
The three flat horses inducted–House-buster, Lure and Invasor–have regional connections as well.
The former, champion sprinter of 1990 and 1991, raced for New Jersey resident Bob Levy and was bred in Kentucky by his mother Blanche and Murphy Stable. Trained by Robert Benshof early in his career and then by Warren A. “Jimmy” Croll Jr., Housebuster won two starts at the Meadowlands as a 2-year-old and took the Frank J. De Francis Memorial Dash at Laurel Park in 1991. The son of Mt. Livermore won 15 of 22 lifetime starts and earned $1,229,696.
Two-time Breeders’ Cup Mile-G1 winner Lure raced for Kentuckians Clai-borne Farm and trainer Claude “Shug” McGaugh-ey III, but made a few memorable trips to the region. The son of Penn-syl-vania-bred Danzig won the 1993 Dixie Handicap-G3 at Pimlico and finished second in the Caesar’s Interna-tional-G2 at Atlantic City that summer. In 1994, he reversed the two placings–finishing second in the Grade 2 Dixie and winning the Grade 1 Caesar’s.
Horse of the Year Invasor won the 2006 Pimlico Special-G1 in his American debut for Shadwell Stable and trainer Kiaran McLaughlin.