David Loman is a well-established member of the Hunter/Jumper circuits, having shown all along the East Coast from Vermont to Ocala for many years.

When asked about his background with Thoroughbreds in the show ring, the answer is impressive. He groomed for Olympic show jumpers Joe Fargis and Conrad Homfield when Touch of Class and Balbuco were at the top of their game. He watched as Thoroughbreds like Jet Run, Madison County, and Albany conquered the show ring. The list goes on and on. Loman's involvement with these pioneers of off-the-track show horses makes him a prestigious Thoroughbred Makeover participant. 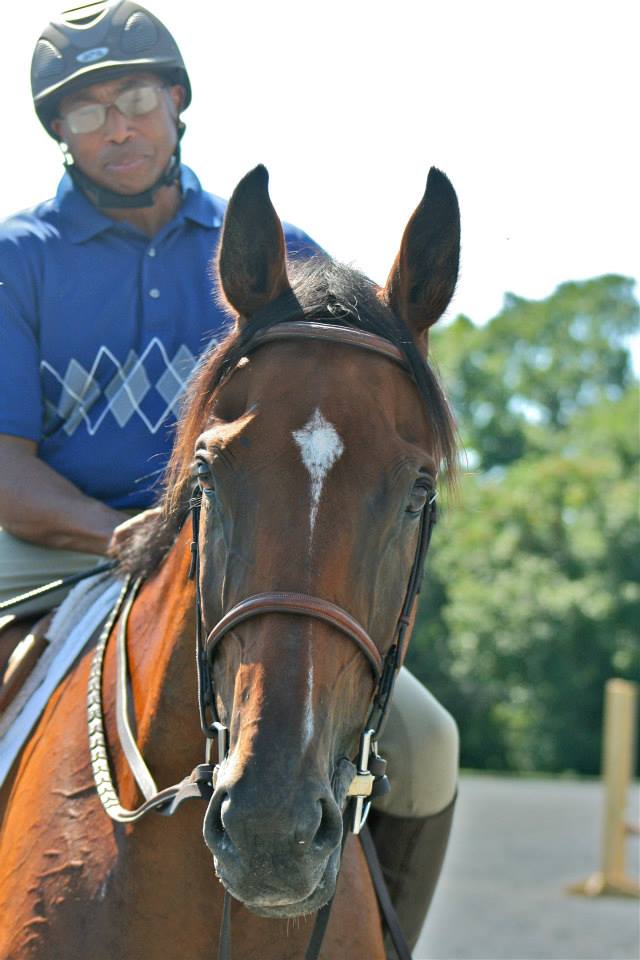 When he's not showing, judging, teaching, or managing his Cornerstone Show Stable, Loman donates his time to Thoroughbred Placement Resources in Maryland. As TPR's main hunter/jumper consultant, Loman designed the course for their immensely successful Thoroughbred Charity Horse Show, and contributed to the retraining of ex-racehorse Constant Star, winner of the John and Beezie Madden's Breeder's Bridge Jumper Prospect Contest.  While his Cornerstone Show Stable does not actively focus on retraining racehorses, the quality and quantity of ex-racehorses available in the Mid-Atlantic region makes the time and effort of retraining them worthwhile. "The athleticism, heart and grace of the Thoroughbred gives them a “leg up” on the competition whatever path in life suits them," instructs Loman,  "Also, ex-racehorses have “seen” a lot at the track, so the busy environment of the shows are something that they adapt to readily."

Daddy's Gabs is not in fact named after Maryland Racing Analyst Gabrielle Gaudet, granddaughter of Yogi's former trainer Eddie Gaudet, but she does remember him at the track. "He was named after the person who had him before us, but yes I know him very well. I used to ride him!" Gaudet remembers Yogi fondly, recalling his love of training and his sweet nature. Off the track, Yogi decided the hunt field was not his calling, and was turned out for 8 months. When Loman sought a new Thoroughbred Makeover horse after his first choice succumbed tragicially and unexpectedly to heart failure, Yogi's owner contacted Loman by way of Diane Crump, and Yogi was loaded onto the trailer for Cornerstone.

Loman's first instinct was to label Yogi an Average Joe. Facing a short time to prepare for the Thoroughbred Makeover, Loman worried over Yogi's conditioning and waited for a revelation about what Yogi wanted to do. "What his parents did or what he did before doesn't mean anything to me when I’m working with him.  What he does now, today is all that matters.  If you listen to a horse it  will tell you everything you need to know about its history." A few lounging lessons, a brief discussion about independence, and a successful outing to the Thoroughbred Alliance Horse Show at Loch Moy Farm, and Loman reevaluated. "Through all of this we have found out that Yogi is not just your "average Joe" as his non-specific persona would indicate, but more of an “I can do anything” kind of guy." Yogi is in capable hands to discover his true calling, and is on track to win hearts once more at Pimlico in October.

More information on the Thoroughbred Makeover and National Symposium.