For the first time in the brief history of the Mid-Atlantic Thoroughbred/The Racing Biz Top Midlantic-bred Poll, a single horse garnered all of the first-place votes in the Older Horse category -- and, remarkably, another horse took down all of the second-place votes in that same poll. 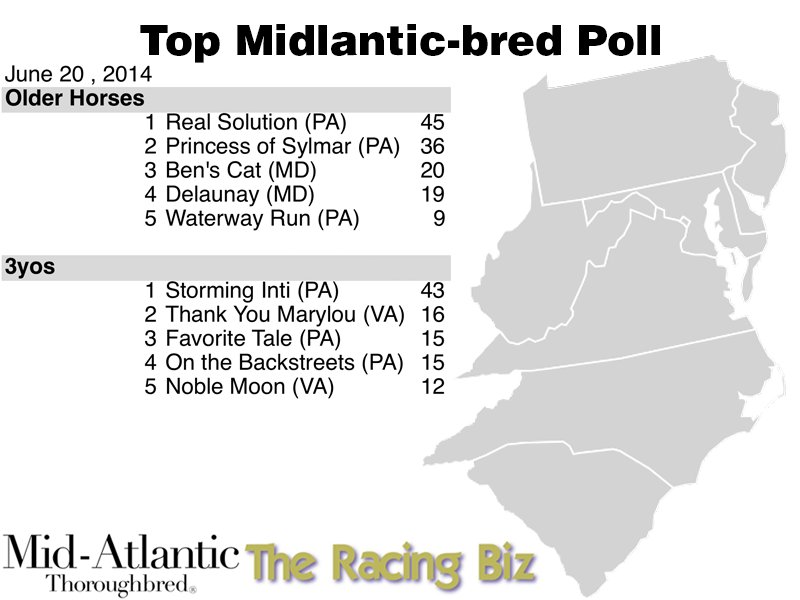 Pennsylvania-bred Real Solution took all of the first-place votes among the Older Horses. The five year-old son of Kitten's Joy, out of the winning Pulpit mare Reachfortheheavens, won the Grade 1 Manhattan Handicap on Belmont Stakes day to rocket past the rest of the field into first place. Bred and owned by Ken and Sarah Ramsey, Real Solution has now won five of 13 career starts -- among them, last year's Grade 1 Arlington Million, via disqualification -- and earned more than $1.3 million. Though bred in Pennsylvania, he began his career in Italy, running five times there before returning to the United States. He's trained by Chad Brown.

Princess of Sylmar, third in the last poll, moved up to second place. She ran a good second in the Grade 1 Ogden Phipps on Belmont day and has a first and a second from two starts this year.

A pair of Maryland-breds, Ben's Cat and Delaunay, were third and fourth on the poll. Ben's Cat ran fourth as the favorite in the Grade 3 Jaipur on Belmont day, while Delaunay was idle. Pennsylvania-bred Waterway Run, fourth on the last poll, dipped to fifth after finishing sixth in the Grade 1 Just a Game on Belmont day.
Among three year-olds, another Pennsylvania-bred, Storming Inti, remained the clear leader. The son of Stormy Atlantic-Tarfaya, by Pulpit has been idle since the last poll and was last seen running third in the Penn Mile. While there was some shuffling in the order of the poll, the only newcomer to the top five was Noble Moon, the Virginia-bred winner of the Grade 2 Jerome over the winter. He'd been the poll leader early on but has made just one start since winning the Jerome in January, when he ran sixth in the Grade 1 Wood Memorial in April. He replaced Daring Dancer.

POLL LEADERS IN ACTION THIS WEEKEND
None

Six of the 10 listed horses, including both poll-toppers, were bred in Pennsylvania. Additionally, two each were bred in Maryland and Virginia. Six of the 10 were males, while four were fillies or mares.
This marked the seventh semi-monthly edition of the poll.