What you may not know about Down Town Allen

Down Town Allen is the most accomplished West Virginia-bred mare in history by number of stakes wins (18 or 19, depending on the source, as a few, including Mid-Atlantic Thoroughbred, count the Ann Hilton Handicap last September). 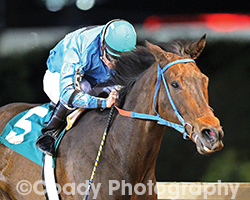 She is the creation of John Casey, who planned the mating, bred her, and owns and trains the daughter of the Casey family’s stallion Windsor Castle. Based at Charles Town, the 7-year-old mare is in the midst of another stellar season, having won all three starts, including two stakes, through Aug. 1. She needs less than $20,000 to surpass Julie B as the richest state-bred female runner. Casey recently took time with Cindy Deubler to reveal a few personal facts about his stable star:

How tall is she?

What size shoe does she wear?
Size 6

Who is her regular groom? Exercise rider?
Her groom is Mike Mumaw, and Kristy (Petty, Casey’s girlfriend) is her exercise rider.

How did you come up with her name?
When she was born, we couldn’t think of a name for her, so Kristy and I named her for our little boy Allen. The other part comes from her mother’s name Like Down Town.

Any barn/pet names?
No, just “Allen.”

What is her personality?
She’s pretty laid back, doesn’t get too excited about things. She’s tough to gallop though?–?she trains hard, pulls hard and loves to train. Kristy sometimes comes back out of breath.

Does she have a best friend?
Kristy is her best buddy. If Kristy is standing in the shedrow, Allen won’t walk past her.

Does she have any favorite treats?
Glazed donuts. . . she also loves carrots and the red Gatorade. When she walks around the shedrow, she won’t walk past the tackroom door until she gets a glazed donut. I go to the market every day and get a dozen donuts. Some days she’ll eat 10. She’ll hold everything up until she gets her donut.
We have to cut the Gatorade off a few days before race time. I don’t think there is anything in them, but with all the tests now, you got to make sure this is nothing in there.

Does she get any special treatment?
She’s the queen.

What is a typical day of training for her?
She’s the first one out every morning, she’s usually the first on the track.

Does she get time off out at the farm, and if so, does she have pasture buddies?
Every winter I turn her out. When on the farm, she has her own paddock and goes out by herself. When it’s warm, she goes out all night, when cold, she goes out in the day.

Were you with her the day she was born (April 5, 2007)?
I was there, we foal them all, but I really don’t remember anything in particular about it.

Update: On August 16, Down Town Allen became the richest West Virginia-bred mare with her win in the Sadie Hawkins Stakes at Charles Town, with earnings now totaling $903,387 as of September 3, 2014.