Pennsylvania-bred Real Solution took on all comers to lead the Mid-Atlantic Thoroughbred/The Racing Biz Top Midlantic-bred Poll, the first one of the year in which three-year-olds and older horses competed against each other in the voting. 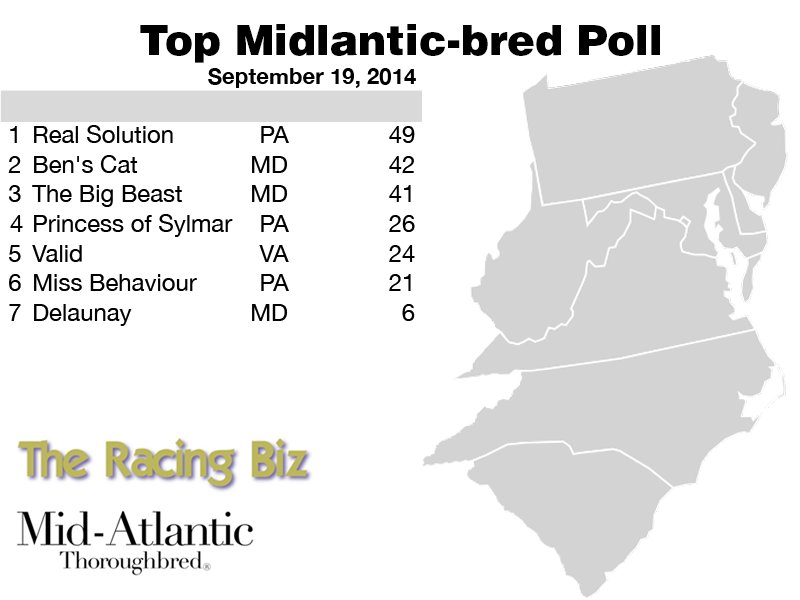 Real Solution, with 49 points, was one of three horses clustered in the 40-50 point range, followed by a pair of Maryland-breds, ageless Ben's Cat (42) and three-year-old The Big Beast (41).

Three more horses, Princess of Sylmar (PA), Valid (VA), and Miss Behaviour (PA), registered between 21 and 26 points. No other horse had more than six points.

Though he has but a single victory this season, Real Solution does have a Grade 1 triumph, in the Manhattan Stakes on Belmont day. He also ran second in another Grade 1 event, the Man o' War.

Bred by Ken and Sarah Ramsey, Real Solution is a five-year-old son of Kitten's Joy out of the winning Pulpit mare Reachfortheheavens. He is trained by Chad Brown and has won five of 14 career starts, earning nearly $1.4 million.

This marked the twelfth edition of the poll.