Real Solution had the worst of it in last Saturday's Grade 1 Joe Hirsch Turf Classic, finishing sixth. -- but that didn't deter voters in the Mid-Atlantic Thoroughbred/The Racing Biz Top Midlantic-bred Poll, who made him the poll leader once again. He earned 42 points to hold off Miss Behaviour, who had 35. 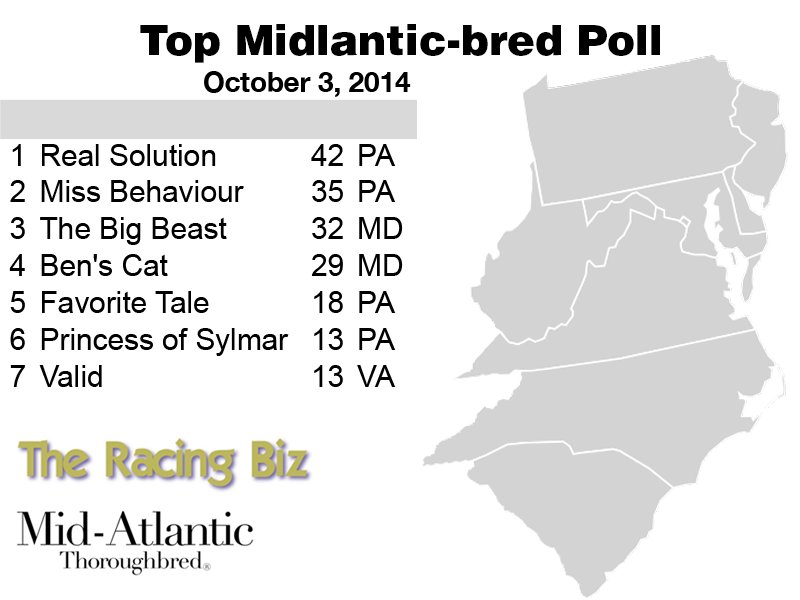 The poll's two biggest movers were Miss Behaviour, who rose from sixth to second, and Favorite Tale, who rose from the also-ran category to fifth. Both are Pennsylvania-breds.

Three-year-old Miss Behaviour, second in three consecutive graded events (including two at Saratoga), delivered a flashy win in the Grade 3 Charles Town Oaks to propel her rise in the poll. Bred and owned by Cal MacWilliam and Neil Teitelbaum, the daughter of Jump Start out of the stakes-placed Successful Appeal mare Successful Romance is trained by Phil Schoenthal. She has won two of six starts this season and earned $548,000.

On the same day that Miss Behaviour scored at Charles Town, Favorite Tale, also three, did the same thing, motoring to an impressive win in the Grade 3 Gallant Bob at Parx Racing. Favorite Tale, by Tale of the Cat out of the graded stakes-placed Grindstone mare Tricky Elaine, is trained by Guadalupe Preciado for owner PJG Stable. He was bred by Paul Conaway. He has won five of 10 starts this year and earned $369,826.

Maryland-bred Ben's Cat, second in the last poll, dipped to fourth after a third-place finish, as the favorite, in the Laurel Dash last Saturday.

The list of seven runners includes four horses bred in Pennsylvania, two bred in Maryland, and one bred in Virginia. Five males and two females are among the top seven; three are three-year-olds.

This marked the thirteenth edition of the poll.