This month 25 years ago 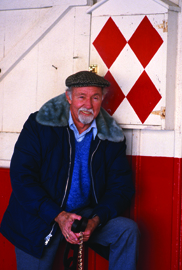 The sale of Sagamore Farm to real estate developer James Ward III signaled the end of an era when the farm’s longtime general manager, Harold H. (Fergie) Ferguson, called it a career.

Serving in various capacities at Alfred Vanderbilt’s farm for more than 35 years, the English-born 75-year-old was “as much a Sagamore trademark as the farm’s white fences and red-trimmed barns,” noted the Maryland Horse’s Lucy Acton.
Ferguson arrived at the farm in 1951?–?when Native Dancer was a yearling?–?and was named office manager. “The farm was very, very busy in those days. Just keeping up with the stakes nominations all over the country was a very big deal,” reflected Ferguson, who became general manager in 1958.
“No part of my job has been particularly hard, but it’s all been interesting.”

It had only been three and a half years since Sondra and Howard Bender bought their first group of racehorses, but by themselves, or in partnership, they had already campaigned four stakes winners, including a Grade 1 winner, and were among the most successful owners in Maryland.
“This is definitely a business for us,” said Howard Bender, “although it started out as fun. You can say the whole thing has mushroomed.”
Bender’s father, the late Jack I. Bender, was one of the founders of Glade Valley Farms in Frederick, Md., but the son didn’t have an interest in the racing business until he and his wife met John Henry’s owners, Sam and Dottie Rubin, through mutual friends.
Two of the Benders’ earliest successes were Laurel Futurity-G1 winner Southern Appeal and New York stakes winner Don’s Choice. The couple’s stable had 35 runners, with 20 2-year-olds on the way.