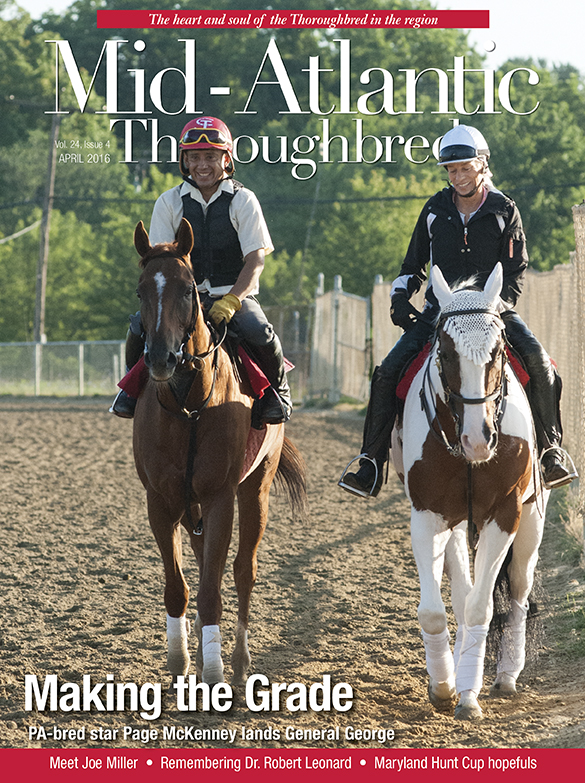 Nothing voters in the Mid-Atlantic Thoroughbred/The Racing Biz Top Midlantic-bred Poll saw in March swayed their impressions of who the best horses bred in the region are.

As a result, Maryland-bred filly Cathryn Sophia was the near-unanimous choice atop the three-year-old division, and Pennsylvania-bred Page McKenney was unanimous as the older horse leader.

This was the second 2016 edition of the monthly Top Midlantic-bred Poll.

Cathryn Sophia, a daughter of Street Boss bred in Maryland by Robert Manfuso, is two-for-two this season and has won all four of her starts overall. Both of her 2016 victories have come in Grade 2 company, and she is scheduled to make her next start in the Grade 1 Ashland at Keeneland on April 9. She received 13 of 14 first place votes.

New to the three-year-old poll this week was Pennsylvania-bred Tom’s Ready. The More Than Ready colt, bred by Blackstone Farm LLC, has a pair of graded placing so far this season, having run second in the Grade 3 LeComte at the Fairgrounds and, more recently, in the Grade 2 Louisiana Derby. The Dallas Stewart trainee has a win and four seconds from nine career starts.

The six-year-old Eavesdropper gelding was idle in March, though not by choice. His scheduled start in the mid-month Harrison Johnson Memorial Stakes was scrapped when the race did not attract enough runners to fill. The Mary Eppler trainee, bred in Pennsylvania by Dr. James Bryant and Linda Davis, has won both of his 2016 starts, running his winning streak to four straight stakes races. Most recently, he lodged the first graded stakes win of his career, rallying to win the Grade 3 General George at Laurel Park by a head. He previously had won the Native Dancer over the strip in early January and has won 16 of 43 starts in his career with more than $1.1 million in earnings.

New to the older horse poll this week was Candida H. The four-year-old Maryland-bred Lemon Drop Kid filly checked in in a tie for fourth after winning an allowance test in March. The Michael Trombetta trainee has two wins this season, including a score in the Conniver Stakes at Laurel Park in January, and has been in the money two other times. She was bred by her owner, Fitzhugh LLC.

Candida H. displaced Long On Value, who dropped to the “others receiving votes” category.

Five of the top 10 horses were bred in Pennsylvania. Three were bred in Maryland, with one bred in Virginia and one in New Jersey. The list includes seven males and three females.