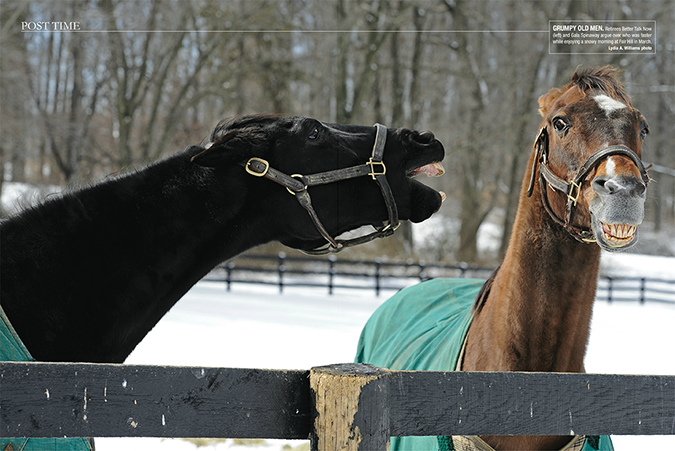 The big prize showcased a successful contest for the monthly magazine published in Timonium, Md., by the Maryland Horse Breeders Association. Mid-Atlantic Thoroughbred writers, photographers and other staffers received four first-place honors, two seconds and a third in the annual contest honoring editorial excellence by AHP members. Ninety-eight members took part in the 2015 edition of the contest, first held in 1974, and made 770 entries.

The General Excellence honor, the magazine’s first since 2004, came in the Association Publication (circulation under 15,000) category. Judges were given three editions from 2015 and responded with:

“This publication stands out for its skillfully rendered graphics, finely wrought action photographs and decent writing. It’s notable for standing features such as Pensioner on Parade (retired horses) and Names of the Month (often funny) as well as up-to-date pieces on racing, steeplechasing and medical procedures.”

Editor Joe Clancy paid credit for the success to a large team of contributors.

“Everybody does something to make Mid-Atlantic Thoroughbred such a good product,” he said. “The MHBA board and membership, executive director Cricket Goodall, a small and dedicated staff, a great pool of freelancers all help make the magazine go. And we couldn’t do it without readers out there supporting the idea that a monthly magazine can be a source of news, entertainment and quality.”