Illinois Derby-G3 winner Done Talking breezed four furlongs at Laurel Park on the morning of Saturday, April 21 in his penultimate work before the May 5 $2 million Kentucky Derby-G1.
The Hamilton Smith trainee stopped the clock in :49.60 and galloped out in 1:02.60 with regular rider Sheldon Russell aboard. 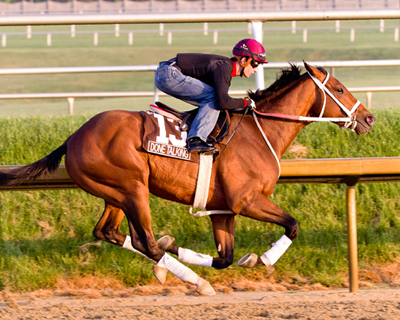 “I wanted him to go in 49, so it worked out almost perfectly,” Smith said. “He did it easy and came back to the barn bouncing. It was exactly what I was looking for. I am not worried too much about the time. We are going to more with him next week.”
Done Talking has won three of seven starts and punched his ticket to the Derby with a driving off the pace score in the Illinois Derby at Hawthorne on April 7. Russell is now two-for-two aboard the colt. He was also the pilot in an allowance victory at Parx Racing in November.
“I was very happy with the breeze,” added Russell. “He is very smart. He doesn’t do too much in the morning, saving it all for the afternoon. It looks like he came back out of that race feeling good. Hammy has him peaking at the right time.”
Smith indicated the son of Broken Vow would work five furlongs next Saturday (April 28) and then ship to Louisville the following day.
Done Talking will be the first Triple Crown starter for Smith, a Maryland mainstay for more than 30 years and current member of the MHBA board of directors. The 67-year-old has 1,644 career winners and has conditioned runners such as Gin Talking, Case of the Blues and Blind Date, all multiple stakes winners.
“I am getting really excited,” Smith said. “I am very pleased with how the horse is doing. We have got him this far and this close. Everything looks good.”
Done Talking is owned and bred by Skeedattle Stable, a partnership of longtime friends Willie White (also on the MHBA board), Lou Rehak and Bob Orndorff. The trio owned, among others, Mr O’Brien (Ire), a multiple graded winner on the turf, and Gin Talking, the 2000 Maryland-bred Horse of the Year and granddam of Done Talking.