What started as a Kentucky Derby tradition of researching Derby horses for the purpose of attempting to hit the superfecta, which is correctly predicting the order of the first four horses to place in a race, has since led Marylander Charlie Fenwick III into authoring a popular racing news email.

Fenwick began the bi-weekly email approximately 15 years ago. The writing focuses on relevant information about potential Derby contenders and summaries of the important prep races.  With a family history in Thoroughbred racing, along with his own experience as a steeplechase and flat jockey, Fenwick has taken his love of racing in another direction – since putting away his racing tack for good.

He started riding at an early age, foxhunting and riding in pony races. Riding and racing was a family affair, with both his father and mother involved in the steeplechase industry. Fenwick took it a step further and became a flat jockey as a teenager. He rode more than 1,000 races each in 1991 and 1992, mostly in Maryland, and won 270 races. After receiving his degree in history from Franklin and Marshall College, steeplechase racing became a hobby and he rode as an amateur for 10 years.

The highlight came with a Maryland Hunt Cup win in 2008, aboard Askim (NZ), trained by his own mother, Ann Stewart.

“I love the competitive nature involved with the sport, and of course the connection you have with the horse,” Fenwick said. That win encapsulated the legacy his family holds with the Hunt Cup, with his father Charlie Jr. having won the race five times as a jockey, as well as a long list of family members who have competed in it since the race’s inception.

The prestige of the Maryland Hunt Cup in steeplechase racing is closely comparable to that of the Kentucky Derby in flat racing, and Fenwick’s inspiration for the email chain about the lead-in to the Derby was born through his passion for the start of a new racing season.

“I believe it’s a rite of spring,” he said. “I love to see everyone getting their horses ready.”

The idea cemented itself with Fenwick when he and a few friends had the opportunity to watch Giacomo, the 2005 Derby winner at 50-1, train at Pimlico.  Fenwick is most interested and inspired by the unique stories behind each contender, his fascination propelling him to keep track of who ends up where and what their background is.

“With the Maryland Hunt Cup, but especially with the Kentucky Derby, there are so many new dreams and stories every year,” he said. “You know only 20 of those dreams make it to the starting gate, so I love to follow how they do it.”

Fenwick believes that attempting to predict the top horses of the Derby is pretty similar to researching to predict the winning brackets of the NCAA March Madness competition. A lot of research is conducted in an attempt to understand each potential competitor, which results in essentially handicapping the entire field. All of the research Fenwick does on these horses is included in his emails, allowing his readers to see his recommended races of the week, along with relevant news, videos, and podcasts.

Fenwick started sending the emails to his friends who were also interested in racing, and from word-of-mouth, the following grew. Readership stands at approximately 500 people across the country, with undoubtedly more to join.

Fenwick’s association with some of his readers has even resulted in a few business ventures (he’s in commercial real estate), all because of an email chain about horse racing. 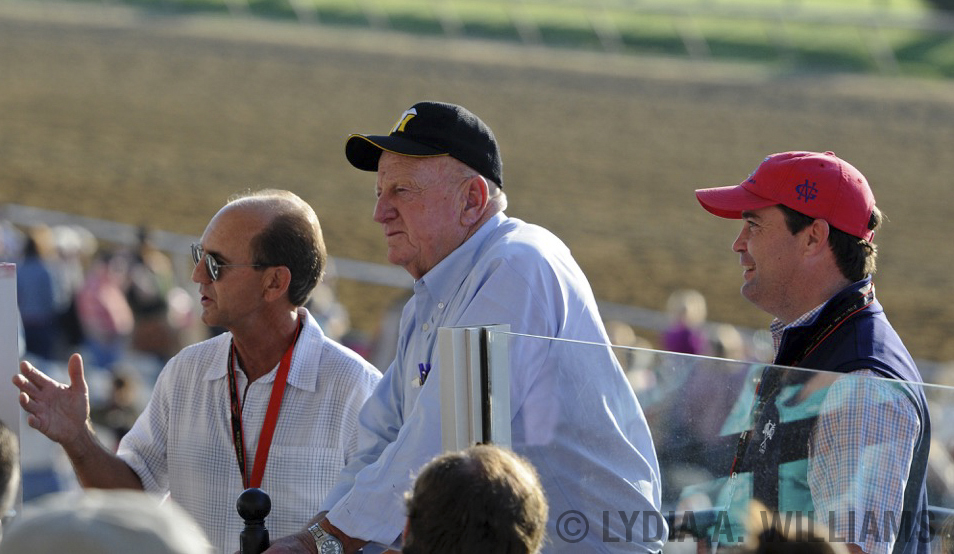 I start the email in draft form, leaving it open to add lots of new articles and updates. It typically takes me about two weeks to complete it and then send it out,” he said.

For each email he sends, he usually receives about 10 responses in return, usually sharing ideas for what to include in the next email or highlighting a horse of interest.

Through many springs filled with emails detailing the always hopeful contenders and those that don’t make it to the coveted starting gate on that first Saturday in May, it all culminates with Fenwick and some friends watching the Derby and Kentucky Oaks – and still trying to hit that superfecta – at the off-track betting parlor in Timonium, Md.

When asked for a prediction for the 2017 Derby, Fenwick said, “I don’t see any clear favorites. Some of the top horses have already been hurt, and as far as I can tell, this will be a wide-open race.”

Wide open possibly, but still the most thrilling two minutes in sports. And a good topic for a 15-year email thread.

If you are interested in receiving Fenwick’s Derby-themed emails, send an email to This email address is being protected from spambots. You need JavaScript enabled to view it. for more details.

A recent sample from one of Fenwick's emails:

Spring is in the air and the Maryland daffodils are in bloom!  We are 9 weeks away from the Derby at Churchill Downs.  That’s around four hard works and one race away from history.  On February 1st there were 150 Derby hopefuls.  March 1st had ~75 and today there are 50.  The list gets smaller every day but the race is still wide open, especially because two of the favorites ran poorly yesterday.  This is the 1st email of the year.  In case you are new, I try to outline the top Derby contenders and research the best stories.  Every horse has a story or a dream to chase.  I like the Rosie Napravnik story (below) and a friend owns a small piece of MO TOWN after selling the majority interest to the Irish las year.  For now, those are my 2017 Derby stories and I hope to add more.  In some cases, one horse may have a lifetime of dreams from many people – all with a unique story.  The racetrack attracts all types of people and the weeks before the Derby are filled with drama and demonstrate why America is a special place.  “Penthouse to the outhouse; Heirs and hoboes” – we will see them all.  I love it.  Please send me any stories you read or like.  This email goes to around 500 people across the country (excuse the typos and spelling errors, this is not my day job!).  My goal every year is to win the Derby Superfecta (1st four horses) and this has proven to be an elusive task.  One year I will hit it but I haven’t in 15 years. It is fun to bet the Derby and you don’t need to be an expert to win.  Mark your calendars for Friday May 5th for the KY Oaks Day.  Come to the OTB in the afternoon at Timonium Race Track for lunch and Derby betting.

Races of the Week

Gotham Stakes  won by JBOYS ECHO – pay attention to how he carries his head at the top of the stretch.  Ears are flat to his neck and this is a sign of a horse that really tries and is aware of the race.  Trainer Dale Romans wife gallops this horse every day – a family affair.  Will run again in the Wood (4/8/17) and was purchased for $485,000 as a yearling at Keenland in 2015.

Fountain of Youth Stakes  - Gulfstream yesterday – won by GUNNEVERA who came from off the pace and ran well.  Did the same in the Saratoga Special Stakes as a 2YO last year and I always like mature horses who come from off the pace.