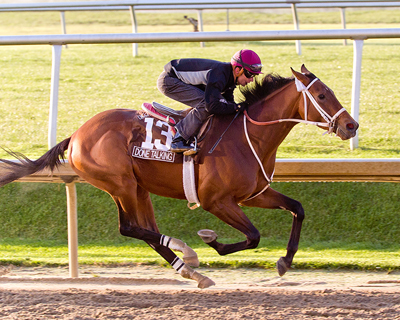 In his final prep for next Saturday’s Kentucky Derby, Done Talking drilled a bullet at Laurel Park this morning, working five furlongs in 1:01.00 under regular rider Sheldon Russell. His move was the best of 17 at the distance. “Everything went well,” said Hamilton Smith. “Time-wise and everything, it was just about what I wanted, so everything looks good.”

Done Talking is the first Derby starter for Skeedattle Stable, a 20-year partnership comprised of Willie White, Lou Rehak and Bob Orndorff. Not only is this Smith’s first Derby horse, it’s his first trip to Churchill Downs. “I’ve never been at Churchill at all. Never had anything to run down there.”

Looking forward, Smith relayed that the hopeful plan is to have the colt start in all three Triple Crown races. “Naturally one race leads to another, but if he comes out of each race well – and if he shows that he belongs there, that’s the main thing – then yes, we’d like to go to all three.”