It’s just two days before Kentucky Derby 138, and Hamilton Smith is still smiling. Marty Leonard, agent for Done Talking’s jockey Sheldon Russell, admits to being just the tiniest bit amazed. “Hammy is handling things surprisingly well, actually. You know that sometimes he might come off as somewhat hard to talk to. But he’s been great with everybody.” 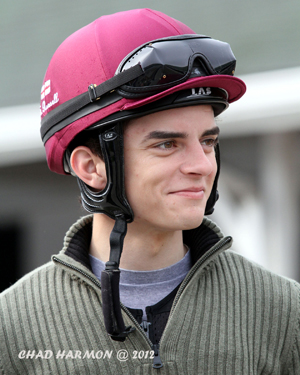 Leonard and Russell are psyched for Saturday. “The horse is doing great out there; couldn’t be happier with him. Bobo (exercise rider Bobo Brigmon) does a great job with him.” And in yet another down-home component to the Done Talking story, Brigmon is Russell’s valet at Pimlico and Laurel. It means a lot to Russell to be able to share this moment with him.

“Sheldon and I are excited to be here,” Leonard went on. “There are a lot of Maryland people down here, which is great. We did an interview with Sean Clancy. And we also saw Dane Kobiskie, who came down here with a few runners.”

Smith and company are excited to have Russell there as well. “He’s an aggressive rider, and a smart one. He studies the Form and he concentrates on these races. We’re very pleased to have him, and I think he’ll do well,” Smith said.

Done Talking drew post 17 for the race, which is a bit outside of what Smith would have ideally preferred. “Something in the middle would be best,” Leonard stated. “But as Sheldon’s been saying, there’s a lot of speed in the race and Done Talking will just naturally take himself back. I’m looking forward to Saturday. This horse deserves to be in this race, and I don’t think people are giving him enough credit. Sheldon’s going to ride the horse as hard as he can and make Hammy as proud as he can make him.”