Classic-placed Irish War Cry, the Mid-Atlantic region’s richest 3-year-old of 2017, has been retired to stud at Northview Stallion Station in Chesapeake City, Md., for the 2019 season. 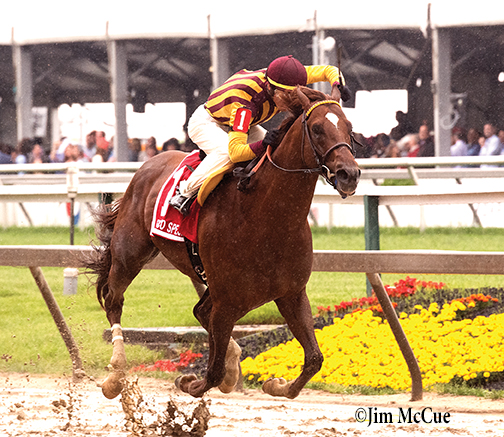 Initially scheduled to stand in Kentucky alongside his sire, two-time Horse of the Year Curlin at Hill ‘n’ Dale Farm, the New Jersey-bred was shifted to Northview.
“With the addition of champion Good Magic [also by Curlin] and the strong track record of making stallions at Northview, we decided this was the ideal situation for Irish War Cry,” said Hill ’n’ Dale owner John Sikura. “His credentials as a top-class racehorse and great physical specimen make him a standout in the vibrant Maryland market.”
The 2017 New Jersey-bred Horse of the Year, Irish War Cry retires a four-time stakes winner of $1,257,060. Raced for three seasons by his breeder, Isabelle de Tomaso, and trained by Graham Motion, who described the chestnut colt as “a gorgeous and talented horse,” Irish War Cry launched his career with three consecutive victories, including the 7-furlong Mary­lander Stakes at Laurel Park to complete his juvenile season, and the Grade 2 Holy Bull at Gulfstream Park going 11⁄16 miles to kick off his 3-year-old campaign.
He sat atop the NTRA’s leading 3-year-olds poll early in the year, and went into the Kentucky Derby-G1 as one of the favorites off a 31⁄2-length victory in Aqueduct’s Grade 2 Wood Memorial at 11⁄8 miles. Off the board in the Derby, he followed with a second as favorite in the Grade 1 Belmont Stakes, leading the majority of the 11⁄2-mile classic and battling to the wire with Tapwrit. Irish War Cry returned at 4 to capture the Grade 3 Pimlico Special, leading at every call of the 13⁄16 miles and drawing off by 41⁄2 lengths over a sloppy track.
The colt is one of six winners from as many starters for the Polish Numbers mare Irish Sovereign. He is a half-brother to graded stakes winner Irish Strait and stakes-placed Irish Politics.
Irish War Cry’s stud fee is $6,500 live foal, payable when the foal stands and nurses. Shares and lifetime breeding rights are available.