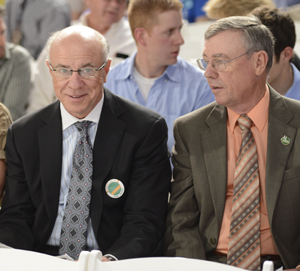 “I haven’t read one article that’s been done on me yet,” Hamilton Smith announced. “I guess I will when it’s over, but I’m not gonna read anything before the horse runs.”

If and when he does, it’s doubtful he’ll be surprised to see that Done Talking, one of the longest shots in the field, is considered by some turf writers to have a snowball’s chance in hell. And he probably won’t be at all shocked at the repeated references to himself as one of the “little guys.” It’s a relative term, of course, used on the grand stage that is the Kentucky Derby to designate a trainer without several assistants running multiple strings at various locations. And, taken in context, it’s an appropriate label to hang on Smith.

Truth is, though, there’s nothing small about an entire life spent in the racing business. Raising a family – and passing on the same professional ethics and dedication to the craft – is not insignificant. Weathering the storms in beleaguered Maryland has been no easy feat, yet Smith has remained rooted when others have pulled up stakes. Maryland is his home; it’s where he and wife Jody have built their lives and their livelihood.

This week in Louisville has been spent answering questions, answering critics, answering his phone time and time again. But when the call comes to the Churchill Downs backstretch on Saturday afternoon to “Please bring your horses over for the 11th race,” everything else will fall away. The veteran trainer will be done talking, and all that will matter are the years, months, weeks and days of preparation that have brought him to this point. Thousands upon thousands will watch him make the walk over to saddle his first Kentucky Derby starter. That will be Hamilton Smith’s moment…..and it will be anything but “little.”