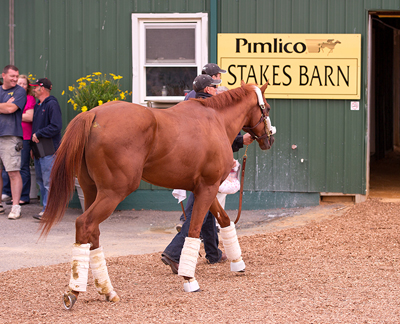 BALTIMORE, 05-07-12--- Kentucky Derby (G1) winner I’ll Have Another completed his journey to the Preakness Stakes at 5:07 p.m. Monday afternoon, 12 days before he will compete in the Middle Jewel of the Triple Crown at historic Pimlico Race Course. The 137th running of the Preakness® Stakes (G1) is Saturday, May 19.

Led by groom Benjamin Perez, the Reddam Racing LLC colt stepped off the horse van that carried him 19 miles from Baltimore/Washington International Thurgood Marshall Airport to Pimlico. The Derby winner left Louisville on a Tex Sutton charter three hours earlier and got a police escort to the track from the Baltimore City Police Department.

“He loves to fly,” said assistant trainer Jack Sisterson. “His ears were pricked. We were getting a police escort and there were people in the streets chanting ‘I'll Love Another’. He knows that's him. His ears were pricked and he said, 'Yeah, that's me.'”
It is the earliest arrival by a Derby winner since Monarchos was shipped to Baltimore four days after his 2001 victory. About two decades ago, Hall of Fame trainer D. Wayne Lukas started a trend of waiting until the Tuesday or Wednesday of Preakness week before shipping to Baltimore. That approach became the norm, but trainer Doug O’Neill was anxious to get his colt to Baltimore.
“There were a couple of reasons,” added Sisterson. “We discussed a few plans and we just thought the more time here to get used to the surface, the better for him. He was enjoying the track at Churchill, and we took him a week before there. It's not going to hurt him being here for the two weeks.”

Sisterson said I’ll Have Another will walk the shedrow tomorrow. The colt is a perfect three-for-three this year with previous victories in the Robert Lewis Stakes (G2) and Santa Anita Derby (G1).

O’Neill will arrive from Southern California Wednesday when I’ll Have Another is expected to return to the track. The conditioner will be throwing out the first pitch when the Baltimore Orioles host the New York Yankees next Tuesday, May 15.
“Every trainer has a different training style,” said Sisterson. “I suppose it's better to get the horse used to the surface and things like that. So, he's here now, and we're excited to have him here for the two weeks.”

The son of Flower Alley will reside in Stall 17 of Barn D, next to the Preakness Stakes barn.

Also on the flight with I’ll Have Another was Went the Day Well. The Graham Motion trainee was then vanned to the Fair Hill Training Center where he will prepare for the Preakness. The son of Proud Citizen finished fourth in Saturday’s Derby and is a confirmed Preakness starter.

Others under consideration for Maryland’s signature race from the Kentucky Derby are Bodemeister (second), Dullahan (third), Creative Cause (fifth), Liaison (sixth), Hansen (ninth) and Optimizer (11th). Union Rags (seventh) has been removed from the list of potential starters.

The Preakness is limited to 14 starters, with two also-eligibles runners. The first seven starters are determined by most graded earnings, the next four starters from earnings from open stakes races. The final three starters are based off of total earnings.

Under the three-tiered system, the horses currently on the outside looking in are Zetterholm, Cozzetti and Brimstone Island.