Just beyond the finish line on the turf course a few minutes after the Preakness, Baltimore Police Department mounted patrol officer Janine Gilley sat tall in the saddle aboard the coal-black Percheron Slurpee and thought about a young, hotshot kid riding for her old boss Mike Campbell. At home in front of her television, former jockey Andrea Seefeldt Knight remembered learning how to ride races from that same hotshot kid while also smiling about a win for his brother at Pimlico nearly three decades ago. Also watching on television, Charlie Hadry went back to the 1980s, when his father had a barn full of stars, and thought of all the hours of work with the subtly funny guy from Louisiana and the dozens of wins with his hotshot kid brother who rode like nobody else. 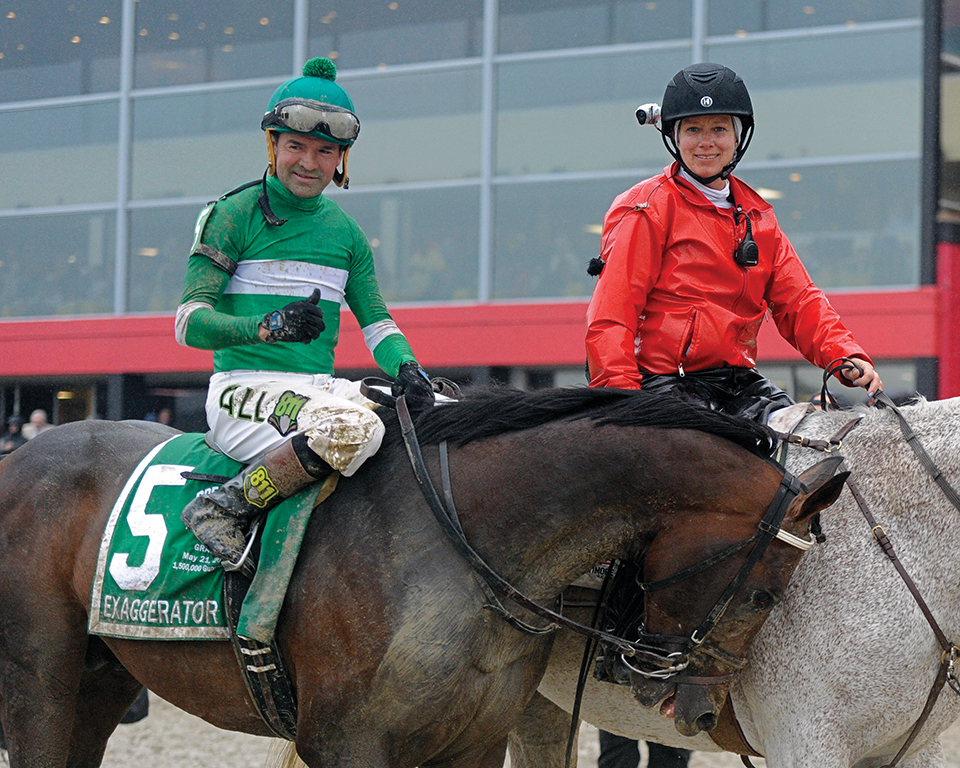 Yes, the Louisiana-born Desormeaux brothers – both of them – have Maryland roots. When they won the Preakness together May 21, plenty of people remembered with equal parts pride and achievement.

“I felt really very sentimental,” said Seefeldt Knight, who won 605 races in a jockey career that ended in 1994. She rode with Kent for years and marveled at his timing, his instincts and the way horses ran for him. Sometimes, she’d get in the starting gate and tell herself to “Ride like Kent.”

“He was incredible,” she said. “I’d been riding seven or eight years, and I came back to Maryland and that’s where I finally learned how to be a good rider. He made me a better rider. I learned a lot riding with him, from a 17-year-old boy.”

Kent arrived first, shipping north from Louisiana’s Evangeline Downs with trainer David Vance in 1987. The teenager and his agent, Gene Short, rode around the stable area in a beater pick-up truck (“a truck from the ’70s” is how Hadry put it) looking for mounts. At some point, they crossed paths with Campbell, who trained a half-dozen horses at a time off the farm and frequently gave opportunities to hungry apprentice jockeys. Desormeaux fit the description.

“Mike really was impressed with how he rode from the get-go, and he didn’t impress easy,” said Gilley, who remembered that Desormeaux never untied the first few braids of a horse’s mane the way other jockeys did.

Just as they did to him, Desormeaux gave little guys like Campbell a chance – and gave their horses confidence. “Kent had such a good, enthusiastic personality. He’d tell you, ‘We’re going to go out there and get the job done,’ ” said Gilley. “We had claimers and things, and he rode them like he was riding stake horses. He would give our horses the same ride that he would a good horse.”

Of course, Desormeaux didn’t ride long for little guys like Campbell. Soon, everybody noticed the enthusiasm, the balance, the timing, the athleticism, the riding genius among the others in the jockeys’ rooms at Laurel Park and Pimlico Race Course.

Nurtured on the bush tracks of his home state, Desormeaux’s acumen for winning races blossomed in Maryland. “He was roaming the backside looking for rides – the next thing you know he was winning all the races,” said Hadry, who assisted his father Charlie with a deep stable fueled by horses from the Janney family, Calumet Farm and other big names. “You just don’t see young riders with the talent he had. He was a natural.”

Desormeaux rode his first Maryland races in 1986, won the first stakes of his career aboard Godbey for trainer Marvin Mon­crief in the Maryland City Handicap at Laurel Park in December. When the calen­dar turned to 1987, the winning truly began. 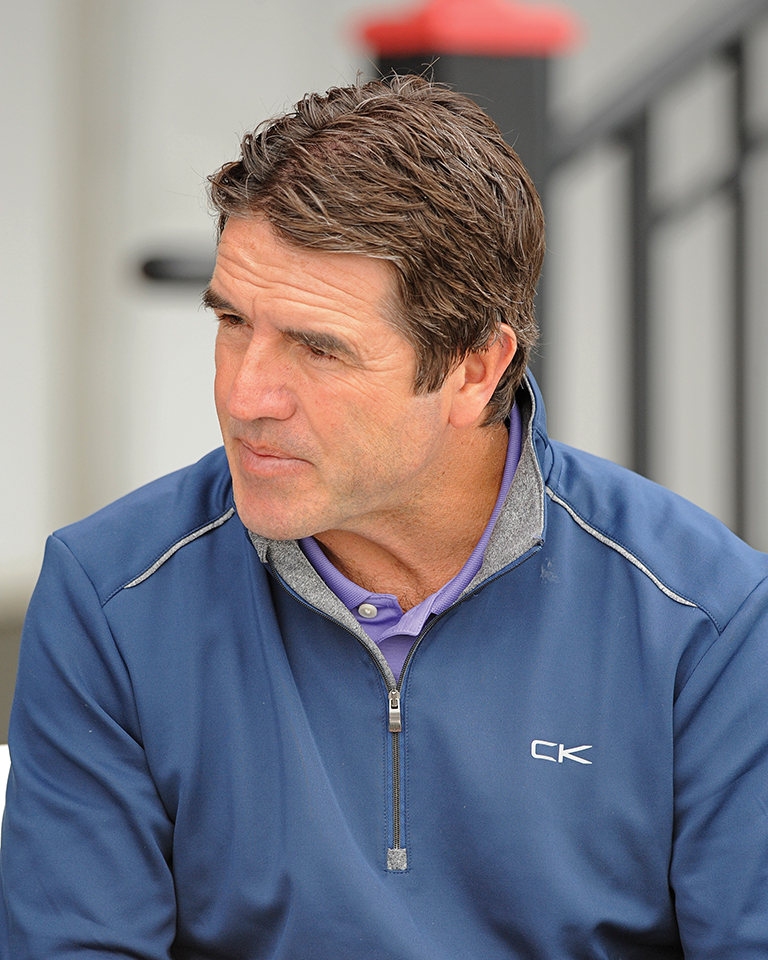 Desormeaux captured 450 races and an Eclipse Award as leading apprentice that year. He won 474 in 1988 and set still-standing national record 598 (by riding day and night) in 1989. Then Maryland couldn’t hold him. Desormeaux moved his tack to California, rode in New York, became a name every big-time trainer considered. He won two more Eclipse Awards, nearly swept the Triple Crown with Real Quiet, won some of the world’s biggest races, made the national Hall of Fame in 2004. The 46-year-old no longer wins hundreds of races a year – and doesn’t ride 2,000 anymore either – but he stands 19th on the all-time list with 5,745 wins (through May) and fifth among active jockeys.

A half-hour after winning the Preakness, standing in front of a locker in the Pimlico jocks’ room and sipping champagne from a paper cup, he paid credit to Maryland’s owners and trainers who trusted a hotshot kid from Louisiana with their horses.

“They put me up on horses for four years,” he said. “They sent me this way. They gave me what I needed and taught me the lessons I learned.”

It took longer, but Maryland put Keith Desormeaux on the path to a classic victory too.

He followed his kid brother to the state during a summer break from studying animal science at Louisiana Tech, and got a job with trainer Tommy Caviness. All about the same age, the Desormeaux brothers and the younger Hadry played softball together and struck up a friendship. They had nicknames, inside jokes, outside jokes, the whole bit. Kent was riding regularly for the Hadry barn, and young Charlie would harass Keith about coming over to their side as well.

“He finally came over and it was good, really good,” said Hadry. “One of the best times of my life. We had 100 horses, Kent was doing well, Keith was there, we were rolling.”

Keith galloped horses, but worked his way up to the assistant’s job – soaking up knowledge from one of Maryland’s most esteemed horsemen. Hadry worked for Hall of Famer Frank Whiteley, and trained for 40 years. Hadry (who died of cancer in 2003) trained Grade 1 winner Private Terms, who went into the 1988 Kentucky Derby undefeated, and other standouts such as Finder’s Choice and Military Look. Keith said he wasn’t good enough to gallop any of the stars, but did ride a colt by Seattle Slew out of Davona Dale named Macau. The future Preakness-winning trainer was there for the stable’s peak and learned plenty.

“With Dad, it was pretty much strictly business,” said Hadry. “He wouldn’t talk a lot unless maybe you would talk to him about something specific. But if you watched the way he did things and how he wanted them done, you couldn’t help but learn from them. It was detailed from A to Z and Keith paid attention.”

According to Equibase, Keith won two races as a trainer in 1988, but didn’t have a starter in 1989. In 1990, at Pimlico, Seefeldt Knight rode what she thought was the trainer’s first winner with Longsufrin’charles. It was officially career win No. 3, but the moment wasn’t lost on the former jockey.

“They sure celebrated like it was his first win,” she said. “He was very dedicated, very devoted to his job when he was here. Being an assistant for Charlie would have been a good job and a hard job to get. Charlie had really good horses then and I’m sure [Keith] learned a lot.”

Keith got his college degree, and became a trainer. He went to California from Maryland and weathered the life of a just-starting-out horse trainer. He trained a few, bought and sold a few, made it work –
all the while learning the craft. He won 10 races each in 1991 and 1992, zero in 1993. The numbers picked up in the late 1990s, but it’s been a long grind to having graded-stakes horses in the barn on a regular basis the last few years. Hadry could see it coming.

Keith, 49, was a student in Barn 21 at Laurel or in the long-gone barn area behind the grandstand at Pimlico. The Cajun didn’t say much, but he listened and watched and learned. “I’m so happy for him,” Hadry said. “He’s got a great eye. He doesn’t spend silly money, and he gets good horses. That attests to his horsemanship. He’s a great trainer. I always knew that. They talk about horses having confidence, but it’s a confidence level in people too. Don’t question yourself when you make a decision. Learn from it, but move on.”

The Desormeauxs are the first brothers to win the Preakness together as trainer and jockey.

Kent’s the famous one, the talker, the one whose career has bounced up and down more than the basketballs he used to dribble back home – from record-setting highs to career-threatening lows and back again. Along with the success, he’s weathered failed Breathalyzer tests at racetracks, an incident with a Saratoga traffic guard in 2011 and strained relationships with owners and trainers that come with such news.

A 2012 article in the New York Times declared him an alcoholic. In a 2013 feature in the Daily Racing Form, he discussed attending Alcoholics Anonymous meetings. The demons worry anyone who knows him. Keith spent the early part of Preakness week saying hello to old friends, and telling them to make sure they reached out to Kent when he got to town.

Two weeks after the Preakness, Kent’s agent J.R. Pegram issued a statement saying the jockey was being treated at an alcohol rehabilitation center in Utah, but planned to ride Exaggerator in the Belmont Stakes June 11.

“It was time to take a sober look at my life and take this next step,” Kent said in the statement.

Keith wouldn’t have registered on the minds of many racings fans before 2013, when Ive Struck a Nerve won the Grade 2 Risen Star at 135-1 to briefly make that year’s Derby radar. The quiet brother does his work, tries to make his horses better, speaks in measured – but no less meaningful – sentences.

Despite the differences, they’re very much family and reveled in the chance to make history together.

“I know it was special for them being brothers even though they want to downplay that,” said Seefeldt Knight. “Keith has always been the older brother, he wants Kent to stay straight. They are really good people, very family oriented and it matters to them.”

On the turf course, after the win, Kent and Keith exchanged a look and a fist pump – jockey to trainer, brother to brother.

“We had an embrace up there, but brotherly love, I don’t know, is it different than any other kind of love?” Keith said afterward. “You don’t need to – when you know you have that type of love, you don’t need to show it outwardly.  We know what we have.”

Kent was similarly stoic in the post-race press conference, but let it out a bit more afterward. He thought about growing up one of six kids (Keith, Kent, Kristi, Kelli, Kalen and Kip) to Harris and Brenda Desormeaux in tiny Maurice, La., about learning horsemanship in 4-H, about riding Quarter Horses, about the riding accident that could have killed him in 1992, maybe even about the ups and downs of life (racing and otherwise). Surely, he thought about his brother.

“For it to culminate in an American classic, that matters,” he said. “I know who the proudest people in the world are right now, my mom and dad. They created these monsters, Keith and I. It’s special, of course it is.”