Getting it right for a horse that mattered

The horse just stood there with his head over the yoke screen in a five-stall barn on a Pennsylvania afternoon. Bay, old, plain, but regal, wise. Something said class, like he’d been places and done things.

Then his halter nameplate came into proper view. 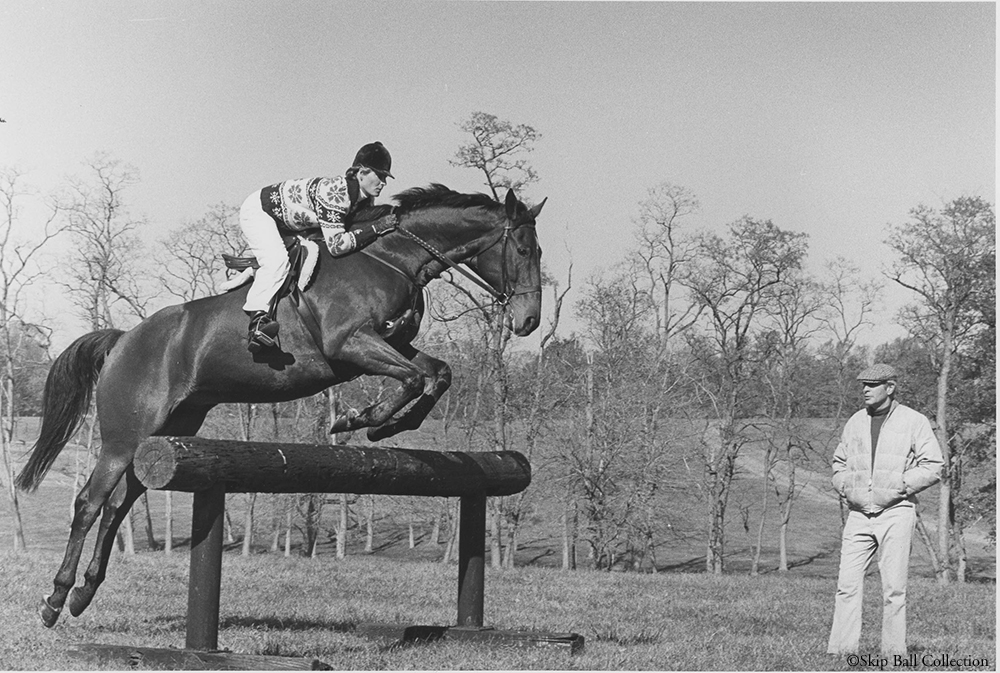 “Is this Inkslinger?” the kid walking past with some tack for a chunky Paint in the next stall asked. “THE Inkslinger? Right here, Inkslinger is in this barn on this day?”

The only other person in the barn simply stared at the kid, and then the horse. “That’s my mom’s friend’s foxhunter. She called him Inky.”

It was Inkslinger. Old, retired, on his second or third career but Inkslinger. The kid said hello, paid his respects, tried to explain what it meant to have such a horse in such a barn – an aluminum-sided, oversized shed.

“Inkslinger is a legend. He won the Colonial Cup. I think he went to England. He could have been a champion if he’d stayed in America. You sure this is him?”

It was indeed him, and it’s still one of the great thrills in my racing life. I was 16 or 17, which meant Inkslinger was 14 or 15 but he seemed to be from a different era. It didn’t seem possible then – or now – that we would cross paths.

He comes to light here because I made a mistake. In a cutline to a photo in the August edition, I wrote that Marshall Jenney was leading Inkslinger after a 1970 win at the Colonial Cup meeting. Only it wasn’t Inkslinger. It was Top Bid, and I regret the error. Consider this a correction. I should have known better.

His owner, Martie Sanger, called to let me know I fouled up. Editor’s Note: if you ever need to receive bad news, get it from Martie Sanger. She apologized for making the call. I laughed, apologized to her (several times) and then told her that story about my brush with her horse in the 1980s.

She let it hang there. A half-hour later, I got the gist. She’ll never forget any of it.

Then married to Jenney, Sanger went to the 1968 Fasig-Tipton yearling sale at Timonium with George and Sally Straw-bridge and Bob and Diana Crompton. They bought horses. Sanger bought Inkslinger.

“We were walking through the shedrows looking at horses, I saw this yearling and it was like a bolt of lightning hit me,” she said of Hip 23, a Maryland-bred colt from the Glade Valley Farms consignment. “He wasn’t particularly beautiful or flashy looking. There was just something about him.”

The bay colt by Bronze Babu out of Laurel Wreath was a half-brother to three winners (one a minor stakes winner), but otherwise would not have made many short lists. Inkslinger shipped to his new home at Derry Meeting Farm, where Sanger rode him in some early work.

“It was 1969 and we were galloping up a gallop in a cow pasture and came upon some cattle grazing and he did a very athletic drop of the shoulder and pitched me right over his ears and broke my back,” Sanger said. “They drove me to Baltimore, put me in a brace, blah, blah, blah and everything healed OK but I remember spending time in bed watching the men land on the moon.”

That was July. Inkslinger was 2. Ten months later, he won his hurdle debut at Fair Hill for trainer Jonathan Sheppard and jockey Michael O’Brien. By year’s end, he’d won five more – running the table with four wins at Belmont Park in September and October and at the Colonial Cup in November. Six starts over jumps, all wins, two against older horses, for a 3-year-old? They’d take your license away for that in 2020.

Inkslinger moved from Sheppard to Mikey Smithwick for his 4-year-old campaign. The soon-to-be Hall of Famer schooled the owner as much as the horse.

“Girl, we’re going to go to Pimlico in the morning,” Smithwick would tell Sanger about her horse. She’d call the next day to ask how things went.
“Girl, the horse did great. We stood at the gap for a while and he shivered and shook, then we went to the coffee machine and he did that fine. We had a great morning.”

Sanger didn’t know how to respond, but got used to it.

“I was very new to Mikey at that point and didn’t know much about his ways or how it would go,” she said. “I’m thinking, ‘What have I done?’ ”

Though he lost his first two starts of 1971, her horse didn’t seem to mind as he closed his 4-year-old season with an allowance win at Montpelier and then a triumphant victory over Soothsayer and Top Bid in the season-ending Colonial Cup. Irish jockey Tommy Carberry came over for the ride, and delivered a masterpiece – avoiding trouble from Jerry Fishback and Soothsayer to get through on the inside and win by a neck with Top Bid third and Shadow Brook fourth. The same horses took the first four places the next year, with Soothsayer getting his revenge and Inkslinger settling for second over Shadow Brook and Top Bid.

The other three won championships – Top Bid in 1970, Shadow Brook in 1971, Soothsayer in 1972. Inkslinger never ran in the United States again, as Sanger sent him to Irish trainer (and Smithwick’s cousin) Dan Moore.

In 1973, the Maryland horse made his-tory – winning the Queen Mother Cham-pion Chase and the Cathcart Chase – in three days at England’s Cheltenham Festival. He finished second in the King George. He started in the 1974 Cheltenham Gold Cup and at Ireland’s Leopardstown Racecourse. He was injured in France and hitched a flight home with the European runners in Laurel Park’s Washington, D.C., International.

Sanger retired him and then told Smithwick she was going to make the star steeplechaser her foxhunter and show horse.

“Girl, you better go learn how to ride,” he said without so much as a pause.
Sanger recruited Jamie Hruska for lessons, took Inkslinger to hunter trials and anything else she could. Naturally, they won plenty of ribbons and trophies.

“He became my master’s horse at Elk-ridge-Harford mainly because he was very hard to hold behind and people were sick of me trampling all over them, so they made me master,” Sanger said. “He just understood foxhunting. He loved it. I didn’t hunt him for the first couple years. I had to take him to just watch and relax and then go back to the farm, but he caught on.”
Somewhere along the line, she brought him to Pennsylvania to hunt – which was how I met him that day in the barn.

“He was down and I got him back up and he lay down again, that’s always a very bad sign,” Sanger said. “He was quite old, and it was time to put him down. I asked the vet if I could give him the injection, that I just didn’t want anyone else to put him down. She got it all ready, she put her hand over mine. He looked at me, he backed up so he wouldn’t fall on me and he went down.

“It was a cloudy day and all the sudden a big blue circle opened up in the sky and there was a rush of wind and snow fell across him. He was really a good friend, that horse, a remarkable racehorse, he really was, but he was so much more.”

And I met him. Once.