Snap Decision puts on a show at Saratoga

People ask me all the time why Saratoga Race Course still hosts stee-ple-chase races. Compared to the old days at America’s most storied racetrack, the jumpers have been marginalized –  seven races (if they fill), always the first on the card, on Wednesdays, no final jump in the stretch, only two hurdles on the backstretch, never in the pick five or other major multi-race wager.

It’s a long way from what Elkridge, Shipboard, Neji, Mako and Benguala used to do or Life’s Illusion, Shadow Brook and Happy Intellectual or even Lonesome Glory, Warm Spell and Mistico (Chi).

But then Snap Decision comes along and does what he did at North America’s oldest sporting venue.

In the Grade 1 Jonathan Sheppard Handicap Aug. 17, while carrying 164 pounds assigned after a near mutiny by rival trainers, the 8-year-old demolished six foes. He jumped the first fence near the back of a seven-horse field, then rolled around everybody on the first of five turns. The 1-2 favorite never saw another horse – putting on a galloping and jumping clinic and winning by 131⁄4 lengths while geared down. Second-place Going Country (Ire) carried 24 fewer pounds. Third-place Redicean (GB) shouldered 22 fewer. Second choice Down Royal, winner of the Grade 1 A.P. Smithwick four weeks earlier, finished sixth (201⁄4 lengths back) while getting 21 pounds.

Performances like that are why Saratoga still hosts jump racing. The track is supposed to showcase such equine excellence. It’s been that way since 1863 – flat, jump, whatever. Paid attendance on the Wednesday afternoon was 24,648. They cheered Snap Decision and jockey Graham Watters across the finish line, cheered some more when the duo galloped back to the winner’s circle. The New York Racing Association put the race on Fox Sports, a rare dose of national exposure for American jump racing.

Owned by Bruton Street-US, a partnership of Marylanders Mike Hankin, Charlie Fenwick and Charlie Noell, Snap Decision won for the 11th time in 16 hurdle starts. He was second in the other five while pushing his career steeplechase earnings to $615,900.

Trainer Jack Fisher nearly didn’t bring his stable star to New York for the race because of that hefty weight. No horse had won the Sheppard (formerly the New York Turf Writers) carrying as much since Hall of Famer Lonesome Glory toted 166 in 1995. Fisher skipped Saratoga’s handicaps with 2007 and 2008 champion Good Night Shirt, did the same during the 2017 title campaign of Scorpiancer (GB). High weights, summer heat, long van rides and hard races don’t always serve horses trying to get to the weight-for-age American Grand National in October.

Fisher used a prep at Colonial Downs (Snap Decision finished third in a turf stakes) as a final tightener, thought it over for a week, even mulled another flat try in Saratoga’s John’s Call Stakes. Then he showed up – for all the right reasons. 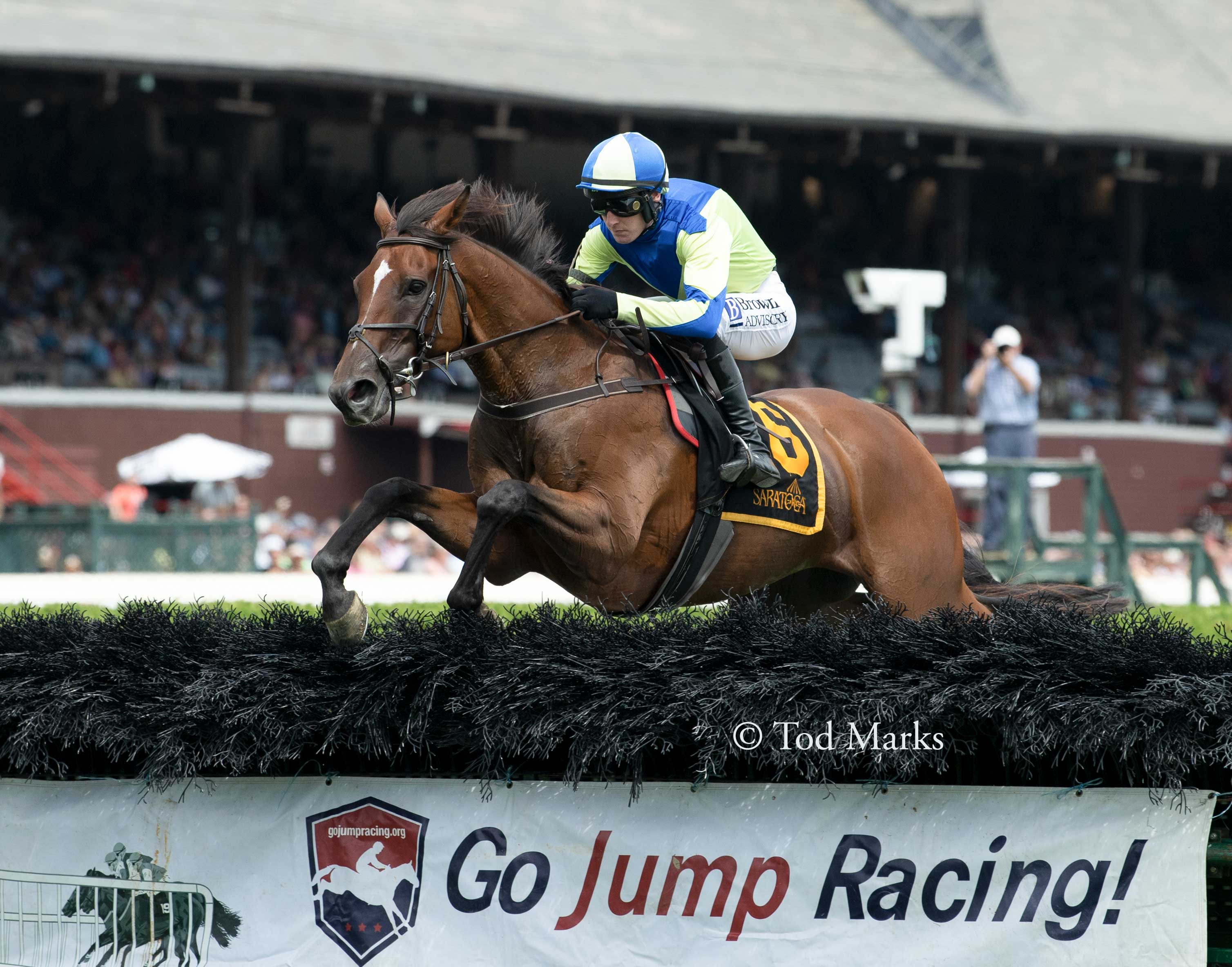 “I wanted to run him at Saratoga because NYRA has been very good to steeplechase racing,” said Fisher after his first Turf Writers/Sheppard win. “I never run my better horses here because it’s a handicap and they get hit with the weight.”

Snap Decision earned the hefty assignment with a Grade 1 win in the Iroquois in May, and a string of other successes going back to his rookie season in 2019. Bruton Street bought the son of Hard Spun from breeder Phipps Stable after 18 starts on the flat. A half-brother to graded stakes winners Mr Speaker and Vigilantes Way, Snap Decision lost two maiden races to start his hurdle career and won his next nine starts – maiden, allowance, five novice stakes in 2019 and 2020, the Temple Gwathmey and Iroquois in 2021. Fisher bypassed Saratoga last year and Snap Decision lost twice to eventual champion The Mean Queen (Ire) to close that season. The 2022 campaign began with another loss, while giving 14 pounds to winner Iranistan, in the Gwathmey. Then came a weight-for-age romp in the Iroquois going 3 miles, the sharpener at Colonial Downs and the Sheppard.

A decision to run never looked so good, even if it came with trepidation.

“It was whether it was the right thing to do for him, not whether he deserved it,” said Watters. “But when you look back, he went round at Belmont last year at 164 and The Mean Queen was in there and she beat him but the third horse was well back and we were giving some of them 20 pounds that day. Maybe today was a little bit better horse, but he’s a big, strong-backed horse. He can carry the weight, he’s a big-muscled horse.”

He ran like it, while improving to 4-for-4 over jumps at the Spa.

Snap Decision twice left out a stride at a fence, including the last leaving the backside, to put horses on the defensive – then kept on rolling with Watters sitting still and asking for nothing other than applause at the finish line. Going Country, in a drive, couldn’t close the gap over the final three-eighths of a mile.

“Sometimes when they come up a little bit too long you’re a bit hesitant,” Watters said of the daring leaps. “But he was pretty sure of himself both times. He’s got so much power from behind, he pushes off with those hind legs and you just flow over them. It’s sheer admiration for the horse, just to be a part of it. I’m 30, I’ve been riding nearly 15 years. I’ll never come across him again. I’m just trying to soak him up, just soak him in all the time. I want to appreciate him. I’ll never forget him.”