“Is this what the founding fathers intended?”
Somebody asked me that question after the Maryland Hunt Cup went into the books for the 118th time in April. I have no idea what they intended, only that we weren’t talking about Washington, Jefferson and Adams.

No, the founding fathers in this case referred to the Hunt Cup originators–Hopkins, Baldwin, Farber, Ulman, Whistler, Stewart, Brown, McHenry and others. The men created rules, drafted conditions, bought a trophy, even adopted an official flag when they formally created the Maryland Hunt Cup Association in 1895 (in time for the second running). 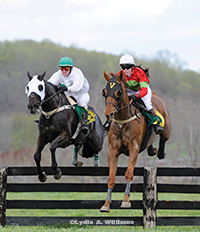 They aimed to create a timber race for foxhunting men and horses from Maryland. Only.
Gradually, change came as the race was opened to horses from other states and Canada, then the world. The course relocated several times, then found a permanent home in the 1920s. Riders had to be acceptable to the race committee, with an emphasis on amateurism. Later, amateurs licensed by the national association were deemed acceptable. Then they weren’t. A woman was cleared to ride in the early 1970s, seemingly opening the door to all female riders. Then that door closed. Then it opened, for good. After decades of debate, a purse was added in 1972. Now, the timber classic is worth $75,000.
I generalized those points above. Their full details would require a book (and there are already at least three Hunt Cup books), but the point is change comes. Even to the Maryland Hunt Cup, one of racing’s great events.
Debate has often centered on jockeys, and that’s what prompted the opening question on this page. The originators called for amateurism but, as in many sports, that designation blurred over time.
Early Hunt Cup riders were bankers, attorneys, farmers and sportsmen who pursued equine sports as hobbies. Later, amateur came to mean someone who did not make his living in the horse industry. Later still, that came to mean a rider who did not get paid to ride races, which opened the race to professional (or near-professional) horsemen. Some order comes from the National Steeplechase Association’s amateur definition, though the Hunt Cup still lists the phrase “owners, horses, ladies and gentlemen riders acceptable to the committee” in its program.
With its big purse, priceless prestige and difficult course, the Hunt Cup demands much.
Owners spend real money to buy prospects, and invest heaps more to have them trained. Those same owners want quality riders, and the course demands a certain level of competency–and that’s where the questions get asked.
Was it OK for former professional champion Jody Petty to ride this year? Was it OK for Blythe Miller, another former professional champion, to ride a few years ago? How about Gus Brown? Danny Marzani way back in 1950? Charlie Fenwick III rode 2,000 races on the flat and won 300 or so. He later rode in the Hunt Cup. Sam Waley-Cohen competes alongside professionals in some of England’s most important steeplechases. He’s flown in for two Hunt Cups.
Some want tighter rules to limit the amateurs who ride for outside owners. Others want to see the race opened to professionals. I say leave it alone. Given the history and the difficulty placing limits on such things, the Hunt Cup does a good job. The race will never return to its strictly owner/rider days, and true professionals really would be a slap at those founding fathers. Don’t ignore the issue or give up the right to make changes, but Petty (who rode just 10 NSA races last year) and the other former pros are following the rules as they’ve been presented.
Right, wrong, indifferent, there will always be debate when it comes to Maryland Hunt Cup jockeys. This year’s field included Petty and Waley-Cohen, plus the less experienced Bethany Baumgardner (in her second official race), Adair Stifel, Connor Hankin and Suzanne Stettinius among others.
Petty won by a nose over Baumgardner. Did his experience help? Surely, but at the same time it did not guarantee victory.
That’s the thing with the Hunt Cup. As the questioner said later in the conversation, the great race “has the last word.” For all the change, angst and questions the Hunt Cup must still be won. You don’t take shortcuts. You don’t take it for granted. And you surely don’t win it easily.
That’s exactly what the founding fathers intended.