The King finally gets his crown

King T. Leatherbury didn’t hesitate, didn’t take a deep breath and think about it, didn’t even blink for all I know. He’s that quick. 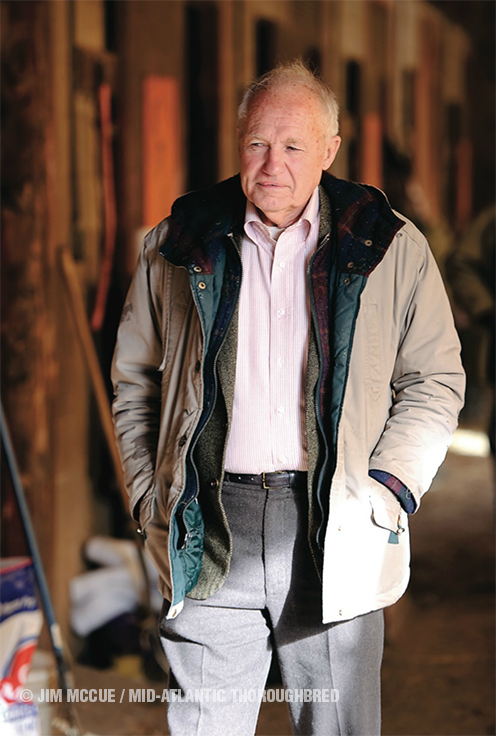 “I got the call, and I demanded a recount,” he said when asked about his initial reaction to getting tapped for induction to the National Museum of Racing’s Hall of Fame.

That’s Leatherbury, whose wit will wow the official induction ceremony in Saratoga Springs, N.Y., Aug. 7. The man can tell a story. Set up a joke. Spin a tale. He can also train a horse, as he’s done since 1959. Nearly 6,500 wins later, he joins Thoroughbred racing’s elite in the Hall.

Not that he’s blown away by it.

After his self-depracating one-liner, Leatherbury said he was humbled and appreciative of the honor but took it a step further.

Each achievement, award, accolade, championship, recognition and victory to come his way meant something to the 82-year-old Baltimore native.

Leatherbury said asking for anything beyond that would have been greedy. And he’s not greedy. To expect more than all those race wins, 52 training championships in Maryland, instant name recognition at any Mid-Atlantic racetrack, star horses like Taking Risks and Ben’s Cat and Ah Day and Thirty Eight Paces would have been a step too far.

The horses were well-spotted, well-prepared. “We won five in one day five times. One of those times it was six because we sent a horse to Chicago and he won.”

Decades after success like that, Leatherbury joins the Hall of Fame for two reasons.

First, the numbers stood the test of time. Leatherbury is fourth on the all-time victory list among trainers with 6,454 wins through May 6. It’s a staggering figure and always will be. He’s won nearly 2,000 more races than Hall of Famers D. Wayne Lukas and Bill Mott and is almost 3,000 ahead of another Hall of Famer and old rival Bud Delp.

Second, Ben’s Cat came into the world. Bred, owned and trained by Leatherbury, the turf sprinter put the trainer back in the winner’s circle, back in the news, back in racing conversations in Maryland and beyond. Still going this year at 9, Ben’s Cat has won 28 races and earned more than $2.3 million (and counting). In his prime, which may not have ended just yet, he was as good at what he did as any horse in the country.

Together, the numbers and the horse overwhelmed the “local trainer” tag on Leatherbury when it came to Hall of Fame consideration. Despite fits of momentum, he struggled to make the ballot put forward by the Hall’s nominating committee. Last year in this space, I compared Leatherbury’s career to that of Northern California-based Jerry Hollendorfer. He won scads of races for decades, but didn’t really garner Hall of Fame consideration until champion Blind Luck came along in 2010. Hollendorfer was inducted in 2011.

Not that he’ll brag about it. The honor is as much for everyone else as it is him - for his family, his assistants, his barn help, the racing office, all those jockeys who rode for him, every other trainer on the Laurel Park backside and the racegoers who cheered home orange-clad horses at a Mid-Atlantic racetrack.

Leatherbury is as happy for them as he is for himself.