Mid-Atlantic gets its day in the Hall 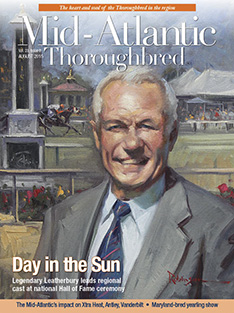 The event happens every August, but rarely hits this close to home. The normal Hall of Fame Day honors a big Kentucky name, maybe a horse who won the Preak-ness, perhaps a trainer who sent horses to Camden for the winter, or a jockey whose career briefly stopped at Laurel Park on the way to the big time.

This year is not one of those years.

Enjoy the moment. “Our” class of inductees stands with any.

Leatherbury, now a world-class racing raconteur with nearly 6,500 victories and the country’s best turf sprinter in Ben’s Cat, was once a guy trying to win a few races at Pimlico and Laurel. The region made him a Hall of Famer. He honed a program based on speed figures, gut instincts and trustworthy staffers. The wins came in waves, bunches, so many that even he seems amazed by it now.

Nine consecutive years, the Hall of Fame trainer (nice ring to it, right?) won more races than he did the year before. Consider that for a minute. Leatherbury had the best year of his career nine times in a row, culminating with 365 wins in 1976. The figure just missed being a win a day since 1976 was a leap year.

Antley, the tragic figure some still call the most talented jockey ever (ever), was once just a kid riding a bicycle past the Elloree Training Center. Lucky for racing, he stopped and decided he liked riding horses more than he liked catching fish. Antley learned to ride at Elloree with Goree Smith, then graduated to riding races for Smith’s brother Hammy in Mary-land.

From that beginning came 3,480 wins, nine in a day, Strike the Gold, Charismatic, Private Terms, Dancing Spree, November Snow, Mr. Nickerson, Meadow Star and all the rest. Of course, Antley left the world wanting more–fighting off personal demons only he knew. Now, with the benefit of history, his career looks that much better even if it ended far too soon.

Xtra Heat, who took on the boys at the Breeders’ Cup and in Dubai, was once a way-below-average sales 2-year-old at Timonium. People said she had OCD lesions in her stifles. John Salzman Sr. bought her anyway, spending less than you might on an OK used car.

He watched her blossom into a Maserati. Xtra Heat won her first six races, made 35 starts (all but one a stakes), won 26 and earned more than $2.3 million. Along the way she won admirers from all corners of the racing world. She broke so fast, she’d nearly knock her jockey out of the saddle. I started cheering while watching her performance in the 2001 Breeders’ Cup Sprint–and I knew she didn’t win.

Alfred Vanderbilt Jr. had the good fortune of being born into great wealth–his father’s family started the New York Cen-tral Railroad; his mother’s the Bromo-Seltzer company–and put it to use in racing in Maryland and beyond. At 21, he was given Sagamore Farm in Glyndon and built it into one of the country’s top racing and breeding operations. Sagamore campaigned Hall of Fame horses Native Dancer, Discovery and Bed o’ Roses among many others.

He could have simply had a racing stable, but Vanderbilt went far beyond that relatively simple achievement. He bought and managed Pimlico Race Course, hosted the Seabiscuit–War Admiral match race, promoted racing to the public. Vanderbilt was later hired to run Belmont Park and was chairman of the board of the New York Racing Association. He enters the Hall of Fame in the relatively new Pillars of the Turf category, and there are few more deserving of that description.

And it weaves through the Mid-Atlantic.