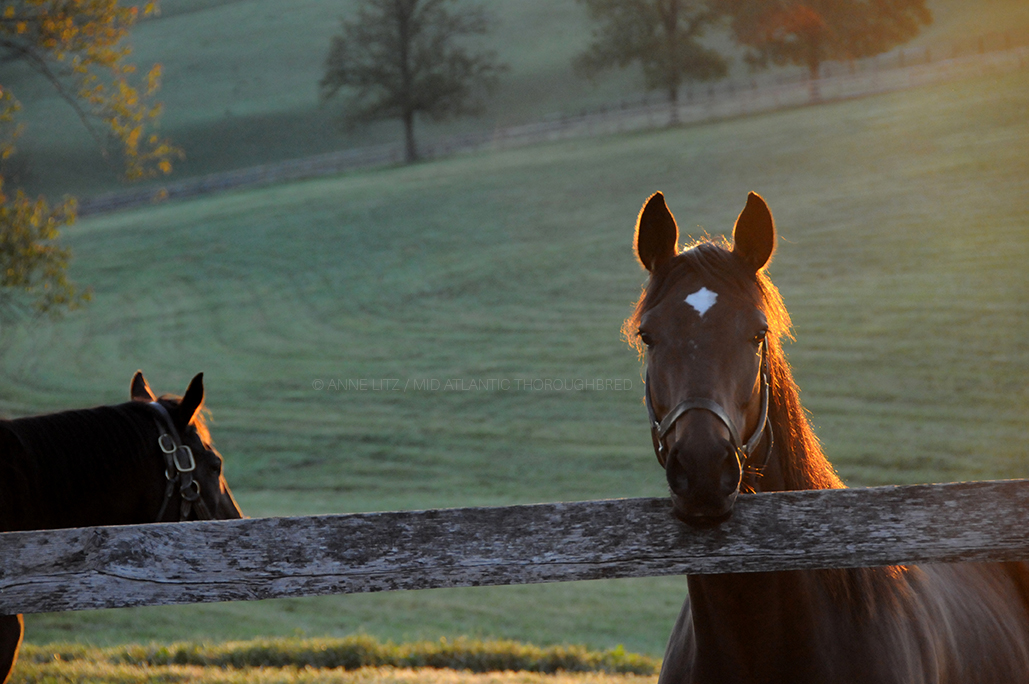 I get asked all the time how people in jump racing justify the danger, the potential for equine injury. First I say it’s not as dangerous as it looks. Then I talk about balance.

Death with life. Injury with enjoyment. Danger with athleticism. Unknown with known. I try to paint a picture with big brushes…

Steeplechasers routinely race at 8, 9, 10, 11, even 12 years old. Without jump racing, where would older geldings like that be? Some might make it out of flat racing OK and find non-racing careers, others would become racing fodder–sliding down the claiming ladder to new barns and finally to obscurity. Four-year-old gelding Grand Strand raced at Parx in July. He was found at the New Holland Auction in August, dramatically saved from a fate nobody wants to know. Three years after selling for $300,000 as a yearling, six weeks after racing for a $7,500 claiming tag, about seven months after posing for a win picture, he was worthless.

He might have made someone a nice steeplechaser, but we’ll never know.

Twelve-year-old champion steeplechaser Divine Fortune died from a broken shoulder suffered when he fell at the last fence of the Grade 1 New York Turf Writers Cup at Saratoga Aug. 27. The moment won’t go away. Not for owner Bill Pape, his wife Anne, trainer Jonathan Sheppard, jockey Darren Nagle, assistant trainer Keri Brion, the others in the barn and anyone else who saw it or even heard about it.

I’m sure it hurt the horse too, though I don’t like to think about it. He was making his 47th lifetime start–and 43rd over jumps–and had fallen twice before at the last fence of a race. The Pennsylvania-bred used a daring, front-running style. He jumped long and bold, with flair. He’d put other horses under pressure with that style, then try to make it last. Often it did, with Grade 1 wins in the Colonial Cup, Iroquois and Grand National and two major wins in Saratoga’s A.P. Smithwick Memorial to show for it. In the 2015 Turf Writers, his fifth start in the race, he led to the last fence but the others were rallying. He turned for home with energy, briefly kicked away for a few strides. The fence came up wrong in terms of a takeoff spot and he gave it a go, rising with eventual winner Bob Le Beau (Ire) but falling hard and rolling twice on the ground. He stayed down. I knew he was hurt, even when he scrambled to his feet and the crowd cheered. I’ll remember those pricked ears and that high head staring far away as he got on the ambulance.

The next day, someone from the flat world asked me to put it in some kind of context. I went to a big one. It was as if Wise Dan died from a racetrack breakdown. The questioner winced, but that’s what it felt like. Jump racing lost a hero in that fall.

But then I tried for some balance.

Divine Fortune was 12, way past his usefulness as a flat horse. He lived on a farm in Pennsylvania, got turned out with friends every day, was loved by Brion and everyone in the barn. He sauntered to morning gallops in rolling fields. Without steeplechasing, he may have wound up where Grand Strand did–years ago–and might not have been so lucky. Divine Fortune died in a race, not in a slaughterhouse. His last moment on Earth was an act of human kindness and mercy. His body was cremated and a memorial service was being planned. Divine Fortune was never worthless, even if he played a risky game.

Divine Fortune was the second consecutive horse to die in a fall at the last fence of the Turf Writers. There were way too many falls at Saratoga this summer. Critically, you have to ask why though the answers come from everywhere–luck, circumstance, horse skill, jockey skill, course configuration, the fences themselves. Something will surely change next year. There’s too much pressure, too much visibility.

But find some balance.

Making radical changes at Saratoga because of the impact runs the risk of considering those races–and those horses–more valuable than those that get hurt elsewhere. And that’s not the case. Every horse, every race, matters.
I wish I had a better answer. Steeplechase horses die from racing injuries at a greater rate than their flat counterparts–leaving the ground 10 times in 2 3/8 miles simply increases the chances for a problem. But do they die at a greater rate now than they used to? Are the horses different? Has something changed? Or are we just more aware of injuries with television access, social media, transparency? Are we more sensitive to it now than we used to be?

Or do we all just need more balance?