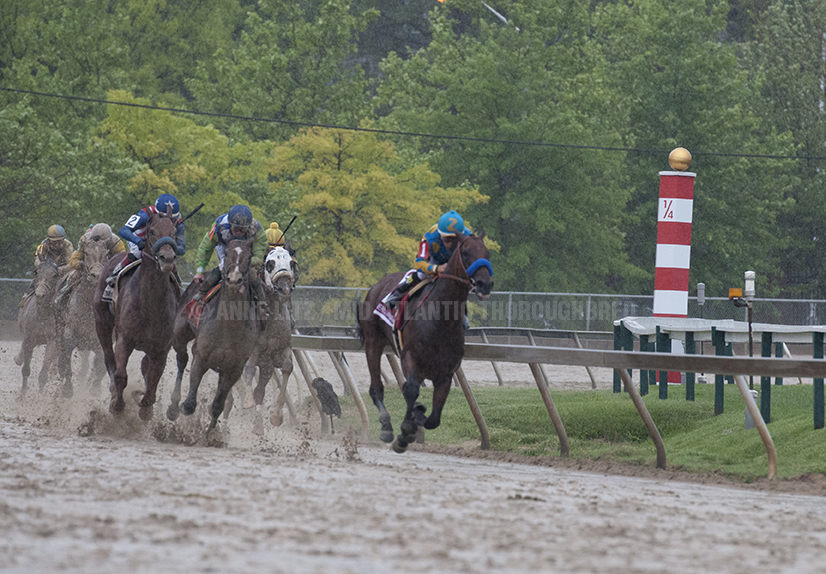 Ah, May. Remember last year’s Preakness? The build-up, the buzz, the “American Pharoah this” and “American Pharoah that” and all the “When will he get here?” questions leading up to the race. The midnight-gray clouds, wind, the rain, the storm, the thermometer dropping from 86 to 56 (amateur meteorologist) in what felt like three minutes on raceday, the soaked silks, saturated shoes and sopping suits.

I’ll remember standing in the enclosed Pimlico Race Course paddock moments before the start and making way for the Baltimore Police Department’s mounted patrol unit to come in out of the storm. I looked at those horses and those riders and wondered what they’d been through in the last month. Baltimore had erupted in protests, looting and riots over the arrest and death of Freddie Gray in April. Just two weeks before the Preakness, a curfew was lifted in the city and the National Guard withdrew. Horses can’t talk, but I imagined them telling me, “We lived through all of that, and now we’ve got this? How did we get here? Who’s pulling these strings? Can’t we just look good, do some basic crowd control and then go eat hay?”

And then American Pharoah went out and blitzed to step two on his historic Triple Crown march. In a post-race scrum in the paddock, Bode Baffert told his father Bob, “One more, Dad.” The Hall of Fame trainer, and anyone who heard it, laughed.

To that point, Baffert had needed one more three times–with Silver Charm, Real Quiet and War Emblem. Each failed. Baffert’s, and racing’s, one more finally came three weeks later in the Belmont Stakes and nothing was ever the same.

After 37 years, racing had its Triple Crown winner. American Pharoah wound up on the Today Show, Good Morning America and SportsCenter–the modern equivalent of Secretariat’s Time, Newsweek and Sports Illustrated covers in 1973. American Pharoah, of course, produced an encore–adding the Haskell and Breeders’ Cup Classic to his Horse of the Year campaign. He lost Saratoga’s Travers to Keen Ice in between, but the trip to upstate New York felt like a victory when 15,000 turned out to watch him gallop and another 50,000 rattled the track’s old bones for the race.

Americah Pharoah is at Ashford Stud, where standout broodmares arrive for him every day. Racing is left to soldier on without its hero.

Will the at-long-last Triple Crown win, which bumped Affirmed and his people from trivia-game hell, usher in a new era of Triple Crown winners? Affirmed (1978) followed Seattle Slew (1977) and Secretariat in a string of three for that decade. Near-sweeps also occurred in 1979 (Spectacular Bid) and 1971 (Canonero II) to give the decade a sense of Triple Crown regularity. Maybe the same awaits the second half of the 2010s.

Like Baltimore, racing seems a bit calmer since the 2015 Preakness.

The Maryland Jockey Club keeps upgrading its facilities, and discussions frequently fly about a “new” version of Pimlico, at Old Hilltop or somewhere else. In April, Maryland’s state legislature passed a bill authorizing lottery funds to help revive the Washington, D.C., International turf race and explore the creation of a $500,000 Maryland-bred (or sired) bonus on the Preakness. Bring it.

Nationally, pari-mutuel handle increased in 2015 after two years of decreases and the foal crop seems to have stabilized at about half what it was in 1990.

Again, like Baltimore I’m sure, unrest exists under the surface.

Medication reform tops the list and will likely stay there for some time. I’m for national uniformity, but also for sensible and scientific threshold levels that inspire confidence, not more questions. As importantly, I’m for tougher penalties for violators. Racing should be tired of the status quo when it comes to trainers with lengthy suspensions simply turning horses over to assistants or trainers in name only. Owners who support such activity should be ashamed.

The magic will always come from performances on the racetrack, however, and that will never change. Just ask anyone at the Preakness.