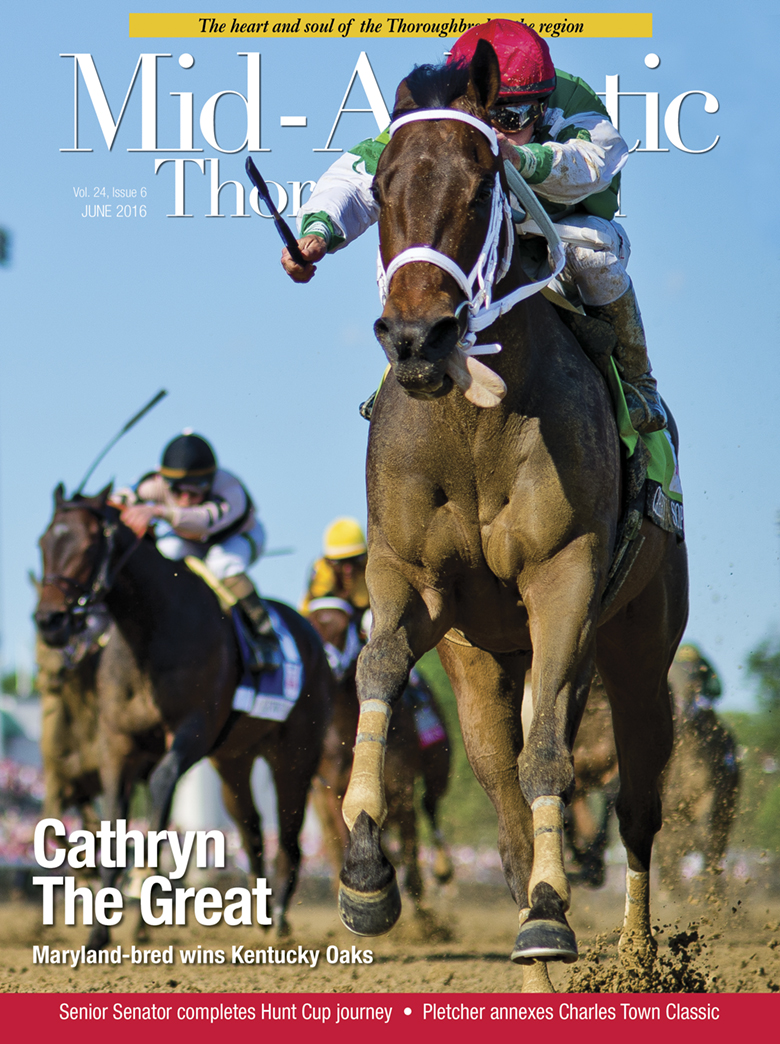 Get out the megaphones, head to the rooftops and start shouting. You can breed, raise, sell, buy, train and race a Grade 1 winner in the Mid-Atlantic. You probably knew that, but it sure helps when you’re trying to make the point with someone else.

The Maryland-bred filly captured the $1 million Kentucky Oaks at Churchill Downs May 6 and became the next poster horse for investing in the Thoroughbred industry, sticking to the plan, supporting the regional market and making sure racing keeps a place in the region’s economic engine. Perhaps most importantly, the victory by the bay filly gives Thoroughbred owners and breeders a talking point with state politicians, economic policy makers and other leaders.

You want to convince someone that higher purses, breeder incentives and so on are a good investment? Tell Cathryn Sophia’s story.

Cathryn Sophia was born in Maryland, at Chanceland Farm in West Friendship. The farm sits right next to I-70 on the way to Frederick. The 195-acre place is not a housing development or an office park, though it does employ a dozen people or so. Chanceland buys hay and straw and feed, keeps a blacksmith busy, pays fees to veterinarians. A full-service, commercial operation owned by Bob Manfuso (officially the breeder of Cathryn Sophia) and Katy Voss, Chanceland foals about 20 mares a year with most of the babies selling as yearlings and a few kept to race.

The future Oaks winner grew up in the fields at Chanceland, and went to the Maryland Horse Breeders Association yearling show in June. Manfuso and Voss love what horses learn there, and swear by it as good sales prep. Chanceland has retired the challenge cup several times. Cathryn Sophia finished second in her class. While it’s a small-time community event, the yearling show dates to 1932 and has been judged by the biggest names in racing history.

Three months later, she was in the sales ring at Timonium. The Fasig-Tipton Midlantic fall yearling sale is many things?–but it isn’t normally the high end of the market. It’s where people come to buy horses though, and Cathryn Sophia fit the bill as a prospect. Pennsylvanian Chuck Zacney spent $30,000 (well above the $21,000 average but nowhere near the $260,000 top price). Fasig-Tipton sold $6 million worth of horses at that sale, which drew buyers and sellers from the region, Kentucky, Florida and even had some international action. For the politicians, that means flights, hotel rooms, meals, rental cars, tolls, staff and all the other associated impact drivers.

Zacney bought two others that day–a filly for $27,000 and a colt for $62,000. In a robust example of why this is such an inexact business, she’s lost her only two starts and he hadn’t run as of mid-May.

Cathryn Sophia ultimately went to trainer John Servis (who grew up in Charles Town, W.Va.) at Parx Racing, where she won her first start. Then she won a stakes at Laurel Park. In both cases, that’s local impact via the trainer’s employees, feed, hay, straw and other supplies, van companies, jockeys, racetrack employees, the taxes generated from bettors and so on.
Don’t laugh, it all adds up. Tell your congressman, and your neighbors. And don’t think other industries aren’t doing it.

About the only non-regional parts to Cathryn Sophia’s story are her sire Street Boss, who stands in Kentucky, her 2-year-old preparations in Florida and her 2016 races in Florida and Kentucky. The region might be able to do something about the former–with an improved roster of stallions, which will get a chance to happen as the other boxes (mares, foals, sales, purses, incentives) get checked. There aren’t many ways to compete with Florida weather when it comes to prepping young horses in the winter, so leave that task on the to-do list, though South Carolina isn’t such a bad place.

Now a Grade 1 winner, an earner of $949,720 on the racetrack and one of the most valuable Thoroughbreds on the continent, the regional girl will get a chance to make more impact as she moved into a stall at Monmouth Park after the Oaks.