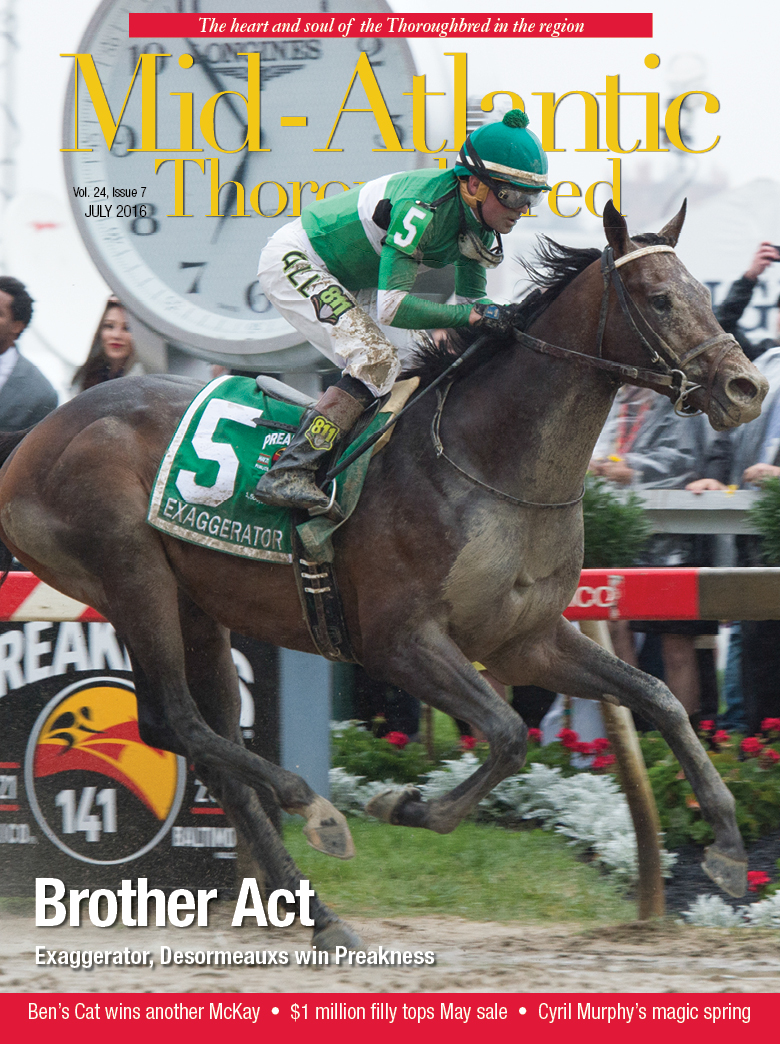 Charlie Hadry, who would have a major role in any production calling for a Maryland Thoroughbred trainer, was dying. He’d gone to the barn one last time, checked his last leg, talked to his last jockey, made his last set list, hired his last hotwalker. Hopefully, he thought about Private Terms, Finder’s Choice, Military Look, Light Spirits, maybe even good old St. Brendan and P Day.

At some point, he talked to his son Charlie “Junior” Hadry and asked a simple question.

This was winter 2003, and Kent Desor­meaux was a fixture in the California jockey colony. On the way up, in Maryland in the late 1980s, he rode regularly for the Hadry barn. The boisterous Cajun and the taciturn Marylander hit it off. With Hadry fighting cancer, his son made a phone call.

“Junior, I’ll get on the red eye and be there tomorrow,” the jockey responded.

And he was. Desormeaux, who would go into the Hall of Fame the next year, flew back to Maryland to see Hadry–who died a few days later–one last time.

“My dad could still talk and see and understand a little,” Hadry said shortly after Desormeaux won the Preakness with Exaggerator. “One of his last wishes was he wanted to know where Kent was. I picked Kent up at the airport and he saw my dad. I’ll never forget that. It shows you the heart the boy has.”

And then some. One moment does not a life make, but Desormeaux’s past in Maryland was on the minds of lots of people around Preakness time. The jockey spent three full seasons in Maryland–leading the nation in victories with 450 in 1987, 474 in 1988 and a record 598 in 1989.

Desormeaux and Hadry won 179 races together according to Jockey Club statistics, and won at a 24-percent clip–well above career marks of 16 percent (Hadry) and 19 percent (Desormeaux). They won important races together, including five stakes with Private Terms. They won not-so-important races together, including 76 maiden contests. They teamed up as early as 1987, when Bal Du Bois won the 1987 Flirtation Stakes at Pimlico. Desormeaux jetted in for the 1992 Maryland Million, and won the Nursery with Hadry’s Military Look. He came back the next year to team up and win the Sprint.

The partnership involved more than legs-up, however.

“My dad really took Kent in like another son,” said Hadry. “The relationship was unreal, really strong. Kent won for everybody, but with Dad there was more to it.”

I bet they’d have some talk now.

More than 13 years after Hadry passed away, Desormeaux and his brother Keith?–Hadry’s assistant trainer for a year–won the Preakness with Exaggerator.

And much of Maryland smiled.

“I was here when he won the Preakness with Real Quiet (in 1998),” said Jamie Ryan, Desormeaux’s valet in the jocks’ room at Pimlico. “I was in the winner’s circle, everything. It was the best. It makes my year to be part of something like this. You understand? It’s huge, just follow it. Him coming back to Maryland. . . he was a kid who came here. . . he rented a room in a basement. Now he wins the race with his brother? It’s amazing.”

Charlie Hadry would be proud, and Maryland should be too.

You don’t get to the top (and the Preakness is that) in racing without a decent place to start–to learn, to make mistakes, to connect with people, to put your hands on quality horses, to watch established horsemen work.
And Maryland has long been that place.