Tractors rumbled, birds chirped and the sun tried to warm a chilly November morning. Next to the historic Laurel Park paddock, 100 or so fans gathered to salute one of Maryland’s grandest Thor­oughbreds – the wondrous Ben’s Cat – one more time.

The people wore orange ties, orange jackets, orange sweatshirts and sweaters, orange scarves, orange hats, orange fleeces, even orange lipstick – all for Ben’s Cat, who did more for orange than Tropicana. Flying owner/trainer/breeder King T. Leatherbury’s orange and white silks, the nearly black gelding made 63 starts, won 32, earned $2.6 million, collected four Maryland-bred Horse of the Year titles. Along the way, he won fans, stopped a few hearts with photo-finish wins (and rare losses) and became an equine celebrity. He died in July, less than a month after being retired. Colic got him, after eight seasons of racing didn’t.

Led by pastor and retired jockey Richard Monterrey and three members of the Maryland Jockey Club’s security detail, Leatherbury and the racing community said goodbye in a ceremony before the races Nov. 11. Fittingly, it was Veterans’ Day. There were flowers, prayers, some words of tribute and comfort. But in the end, it was a funeral. There were tears, quiet reflection, flowers, a lowering of a wooden box into a grave, a ceremonial shovel of dirt.

“It was a tragic ending to a magnificent animal,” Leatherbury said afterward. “He was something very special.”

Ben’s Cat was laid to rest next to the paddock, where a bronze plaque and a small garden will tell anyone about a horse some called “The Beast from the East.” Nobody misses the horse more than his Hall of Fame trainer. Leatherbury balked at naming a favorite moment, but did relive the final win of that unparalleled career – the 2016 Jim McKay Turf Sprint at Pimlico.

“Nobody thought he was going to win,” Leatherbury said. “There was no way in the world he could get up, and right at the end he splits horses of all things and nails his head down there and got it. Absolutely crazy. I was hoping for third, I remember saying, ‘Please just get me third money’ and he ends up getting it all. That was him.”

The Maryland Jockey Club was always going to pay tribute to Ben’s Cat, with a day, an autograph session, a poster, maybe a bobblehead. Leatherbury and Chris Welker, who gave Ben’s Cat his retirement home in Kentucky, might have arranged for him to lead a post parade or at least visit the winner’s circle one last time. Good horses get to do such things.

Then he died, and Ben’s Cat Day became something else. Oh, he got his bobble­head, poster, an autograph session with his trainer and every winning jockey the horse had (Julian Pimentel, Trevor McCarthy, Jeremy Rose, Rosemary Homeister Jr. and Horacio Karamanos), a video tribute, decorated lead ponies and even a win on the card by a Leatherbury horse. All that came after the ceremony by the paddock.

The funeral team, led by MJC security head Mike Singletary, added some order. Monterrey spoke first and made sure Ben’s Cat got his “Amen” from the crowd, though it may have been as much for the people as anything.

“I know what God said in the Bible,” Monterrey said. “We always have to be thankful that he gave us these amazing animals, to be around them, and have a job and to see them do what they do is a blessing. That’s why I acknowledged God for Ben’s Cat and every horse that has come along.

“Every animal is created with their own abilities but to have a horse like that with those abilities is a blessing. We were blessed to have him.”

Singletary called his role of presiding over the ceremony an honor.

His boss, MJC president and general manager Sal Sinatra, asked for Singletary’s help and the 27-year employee responded. He called out instructions in a deep bass, stood at attention over the gravesite, even got a salute from Leatherbury toward the end of it all.

“You don’t often get an opportunity to lay to rest a great horse like Ben’s Cat,” Singletary said. “These memories will last for a long time so it’s always an honor. It takes these types of events to bring people together that really love the sport. We needed to do it. We need to continue these legacies.”

Ben’s Cat fans James Weiler, who sported a custom-made T-shirt, and Angela Bailey came to Laurel from Cincinnati. The weekend getaway, Bailey’s birthday present to Weiler, was all about the great horse.

“Ben’s Cat started for me in 2013 when he won the Parx Dash,” said Weiler, who watched from Turfway Park near his hometown. “Just a sensational animal. Watching Ben’s Cat run, he was just such a majestic animal. His last win, when he won the Jim McKay for the fifth time, that was an amazing win. Every time Ben’s Cat raced I looked forward to it.”

Weiler wasn’t alone. Ben’s Cat’s name in the program meant a chance to be wowed. It all feels a bit emptier knowing that chance is gone.

“Never again, no more,” said Leather­bury, with a nod toward his horse’s grave. “I’ll miss him. Everyone will. But for years to come, they’re going to come by and see Ben’s Cat here and remember him.” 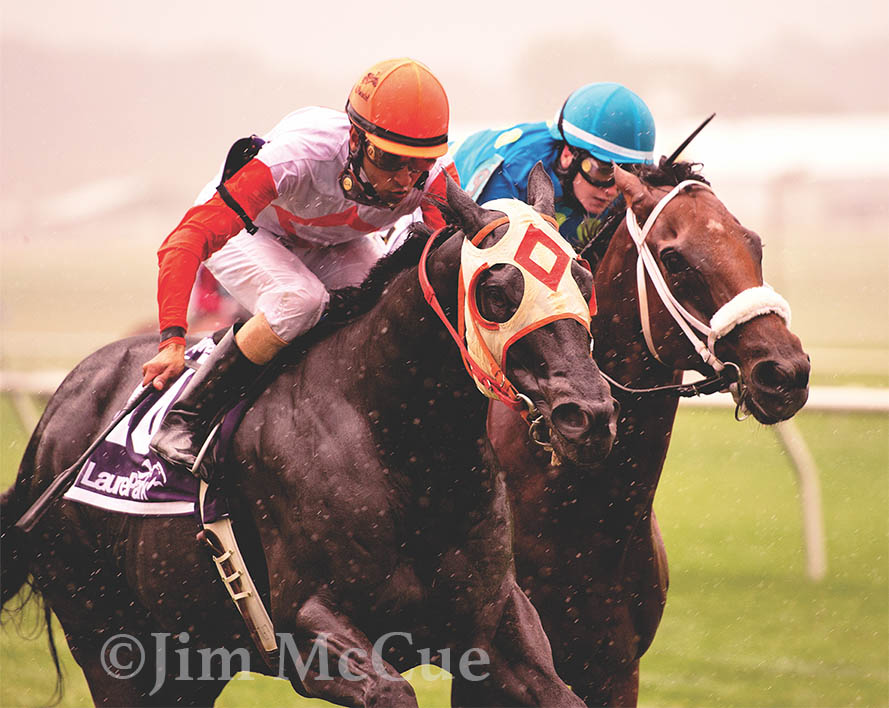