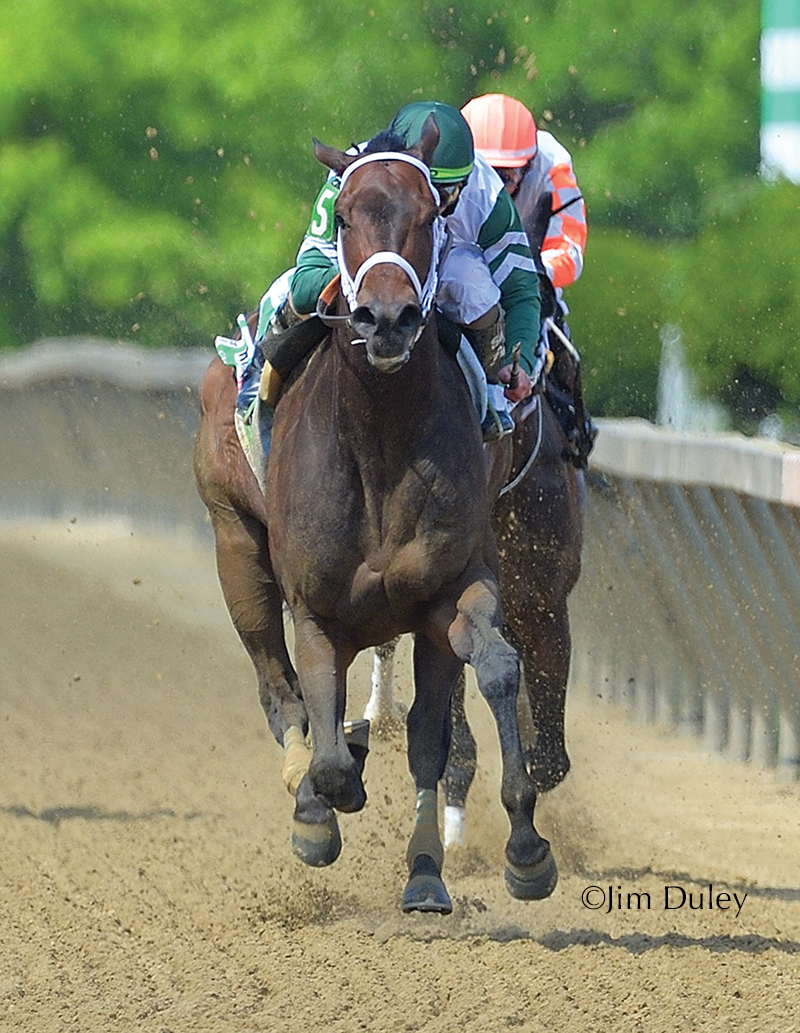 “The first time I was in there was 50 years ago,” Lopez said, pointing to the Pimlico Race Course winner’s circle while he walked from the owners’ boxes after Chub Wagon improved to 6-for-6 in the $100,000 Runhappy Skipat Stakes on the Preakness Day undercard May 15. “That’s a long time ago. One of my first winners was right here.”

A good one like Chub Wagon, co-bred in Pennsylvania by Lopez’s Joe-Dan Farm and George Chestnut, can have such an effect. The 4-year-old daughter of Lopez’s stallion Hey Chub and the Lion Heart mare Takin the Plunge won the 6-furlong Skipat by 2 lengths under Irad Ortiz Jr., coming from off the pace this time but still winning in a sharp 1:09.71.

Chub Wagon never trailed in her previous five starts, winning by a combined 32 1/4 lengths, but after a few jumps the 6-5 favorite in the field of seven found herself a couple lengths back. She was third through an opening quarter of :22.87 behind Donletsweetfoolya with French Empire to her outside.

Ortiz, who rode the filly in an open-company allowance victory at Aqueduct April 2, didn’t worry about the early disadvantage.

“She relaxed more,” he said. “I broke out of there, I see the other horse had some speed, so I just went to Plan B. She relaxed.”

Ortiz tipped Chub Wagon off the rail turning for home and she rolled past the leader, opened up and held off the late run of 3-1 third choice Casual, who nosed Club Car for second.

“I knew she could do that,” Lopez said. “I trained her at Monmouth last year before the end of the meet, then I gave her to [Guadalupe Preciado]. I told him, ‘She’s quick, she rates and she’ll win.’ I didn’t know she was this good, but she just kept improving.”

Preciado trains the filly at Parx Racing, where Chub Wagon won the restricted Unique Bella Stakes 18 days before the Skipat.

“We wanted to try to do that [come from off the pace], and today was the perfect day,” Preciado said. “We wanted to see if she could rate in case, one day. . . we know whether we can do it or not. It worked out good. We know she can come from behind.”

Lopez previously stood Hey Chub, a multiple stakes-winning son of Carson City he bred and owned, at his farm in Medford, N.J. Lopez moved his breeding operation – which produced six Pennsylvania-breds in 2021 – to the Keystone State before Chub Wagon was born. Hey Chub and Lopez’s other horses are boarded in the equine program at Delaware Valley University in Doylestown. Chub Wagon is the third foal out of the unraced Takin the Plunge, bred by Lopez out of the stakes-producing Sassy Broad. Chub Wagon’s 7-year-old full-sister Chubofftheoldblock placed in a stakes last year and was retired with $177,388 in earnings.

Takin the Plunge is also the dam of unraced 3-year-old Uncle Lino colt Helost­hismarbles in training with Preciado at Parx and a yearling filly by Hey Chub. She was also bred back to Hey Chub last year.
“Her half-brother is fast, too. Every good horse he bred can run,” Preciado said. “He’s got nice horses and he owns the stallion. When he came to me about training her, he said she was a nice filly. He left her with me and I said, ‘Well, I guess you don’t like the stallion that much.’ I was playing with him. I’m very happy to have her, she’s fast and we try to do the right thing with her.” 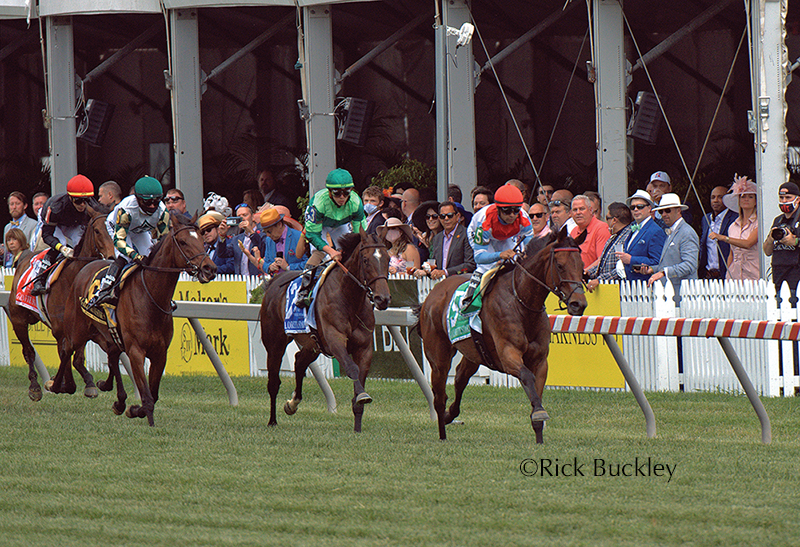 Alex Campbell Jr. bred his Grade 1-winning mare Karlovy Vary to Scat Daddy in 2015 and named the resulting foal for assistant Mary Venezie – with a wink and a nod.

Venezie isn’t mean and her namesake has proven to be well worth her early troublesome reputation as she added the $150,000 Gallorette Stakes-G3 to a growing list of achievements. Sent off at 4-5 in a field of five, Mean Mary broke running for Luis Saez and was never threatened through fractions of :25.27, :50.92 and 1:15.29. She came home much faster than she started and stopped the clock at 1:43.10 for 11⁄16 miles. Vigilantes Way finished a half-length behind in second. Mean Mary improved to 6-for-10 with $606,160 in earnings.

She became a millionaire three weeks later when she wired the $750,000 New York Stakes-G2 at Belmont Park June 4. Based in Maryland with trainer Graham Motion, she made her debut at Laurel Park in 2019 at 3 but her subsequent starts – including three additional graded wins and a second in Saratoga’s Diana Stakes-G1 last summer – came in Kentucky, Florida and New York before the Preakness Day win.
“It was perfect. I couldn’t have asked for anything else, really,” said Motion of Mean Mary’s first start since November. “I didn’t know that they would let her go that easy on the lead. My main concern was that she was settled, that she was relaxed.”

Venezie was anything but, after a hectic 24 hours complete with emergency-room visit, doctor’s clearance, flight from Florida and just-in-time arrival at Pimlico. Campbell, 93, needed stitches to close a gash on the back of his head from a fall at home but stood tall in the winner’s circle in Baltimore.

“We didn’t know if he was going to be able to come and it was all very stressful,” said Venezie. “We made it and you know it means a lot to him. We got here when they were loading up [in the starting gate] and barely got here in time. It’s great to be here. He loves Baltimore and loves seeing her run.” Venezie considers the name an honor now – especially when she thinks about the connection with her boss.

“I got lucky when I found him,” she said. “He has been a blessing in my life, my entire life. He is such a classy person, so wonderful and so kind. He named a great horse after me, so I’m thrilled. He had a little fun with me, and I didn’t like it at first, but I love it now. She’s so special to watch.” 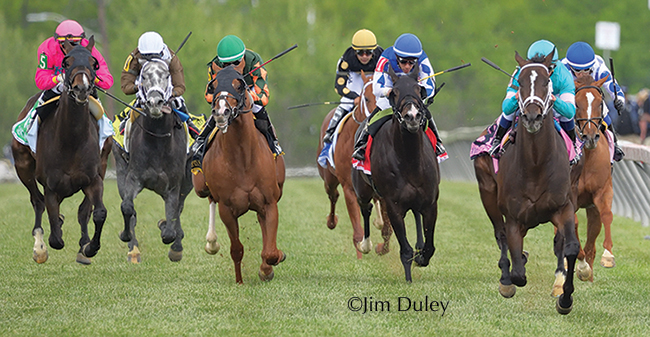 Brad Cox shipped a strong contingent of five horses from his main string at Churchill Downs for Preakness Week­end, leaving behind Kentucky Derby runners Mandaloun and Essential Quality. Two looked like they could be favored – Adven­turing in the George E. Mitchell Black-Eyed Susan-G2 and T D Dance in the James W. Murphy – and the latter wound up odds-on and the lone winner. T D Dance, whose pedigree traces way back to John Mabee’s multiple graded stakes-placed Maryland-bred Sophisticated Girl, improved to 3-for-5 with a 3 3/4-length win under Javier Castellano. Sent off at 9-10 off a win in late March on the turf at Fair Grounds, the 3-year-old son of Can the Man also won for the third time in four tries on the grass.

“The race was here. It was either this or the race Derby Day,” Cox said of choosing Pimlico instead of the $500,000 American Turf-G2 May 1. “I thought this made a little bit more sense at this time of his career. Hopefully, we can compete with the horses on the NYRA circuit in the 3-year-old division. That’s the goal.

“He has been a horse who in his last few races has been sort of leaning in a little bit. He seems to have straightened up. Javier said he galloped out really well and gave him confidence to think that he is a horse that would go further. He doesn’t take a hold of the bit, but he is a horse that has learned to relax.” 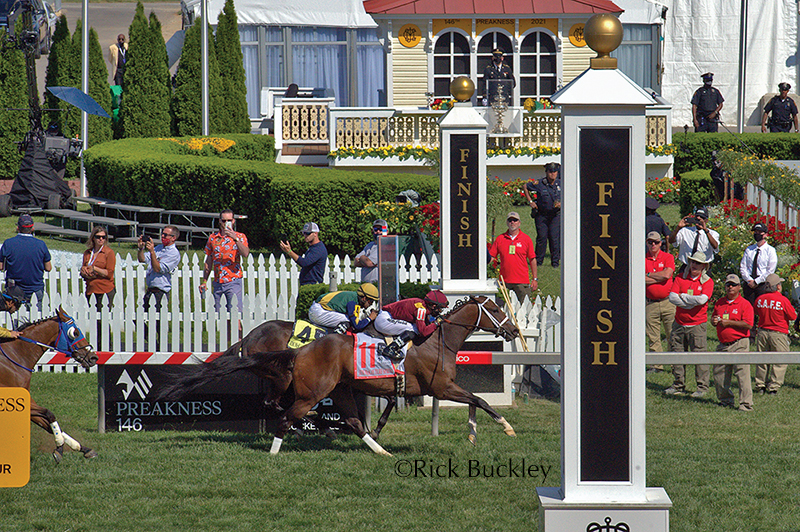 How good was the ungraded Hot Springs Stakes in mid-March at Oaklawn Park? Just ask Ron Moquett, whose horses finished second and fourth.

“That last race was as tough as it gets,” the trainer said after Firecrow lowered the course record for 5 furlongs in the $100,000 Jim McKay Turf Sprint Stakes while defeating a dozen rivals. Moquett’s champion male sprinter Whitmore finished second in the Hot Springs, with the winner C Z Rocket and third Flagstaff coming back to win graded stakes.

Fourth in the Hot Springs, Firecrow returned to the turf for the first time since a distant ninth in a 5-furlong allowance on good ground Nov. 1, 2019, at Churchill Downs after a third in a similar spot about a month earlier at Keeneland.

“We were just waiting,” Moquett said of the return to the grass after six starts on the dirt. “We thought he was very good on the turf, but they don’t have any lawn at Oaklawn, and we weren’t shipping all the way to Fair Grounds when the purses are so much better at Oaklawn. He’s capable on the dirt. We figured we’d get back around to it, and today was the day. It showed he belonged.”

Moquett also sent out Prodigious Bay, a Maryland-bred son of Bayern purchased by the Cella family for $110,000 at the 2019 Midlantic May sale, to an allowance win early on the Black-Eyed Susan Day card.

NOTES: The King Cheek started a big Preakness Day for Mid-Atlantic connections with a victory in the Sir Barton Stakes. Based at Parx with trainer Jamie Ness, the 3-year-old New York-bred son of the Laoban turned back 3-5 favorite Hozier in the stretch to win the 11⁄16-mile stakes by a head. The racing office hustled The King Cheek, claimed by Ness and Morris Kernan Jr. for $20,000 last September at Delaware Park, into the race with the prospect of a short field to face Rebel Stakes-G2 runner-up Hozier. “I always thought he was a two-turn horse,” Ness said. “This was kind of a last-second entry. It was kind of a short field.” The King Cheek improved to 4-for-9. . . Steve Asmussen took home the $50,000 trainer bonus offered by the MJC for participation in stakes thanks in part to a 1-2 finish by Mighty Mischief and Maryland-bred Jaxon Traveler in the $200,000 Chick Lang-G3 for 3-year-olds. Mighty Mischief, a homebred son of Into Mischief for Bill and Corinne Heiligbrodt, won by 1¼ lengths in 1:09.74 for his third straight win after a second in his debut Feb. 7 at Oaklawn. The victory came full circle for the Heiligbrodts, who bred Mighty Mischief’s stakes-winning granddam Lunar­gal and sold her for $210,000 at the 2006 Keeneland November sale. Lunargal later produced the winner Wealth Creation, a daughter of Super Saver purchased as a 2-year-old by Seth Klarman’s Klaravich Stable for $250,000 in 2014. A year after she sold for $45,000 at the 2016 Keeneland November sale, Corinne Heiligbrodt bought her carrying Mighty Mischief for $230,000 at Keene­land November. Asmussen trained four other Lang winners in Lantana Mob (2008), Holy Boss (2015), Mitole (2018) and Yaupon (2020), the latter two for the Heiligbrodts . . . The Preakness Day card produced record wagering results with the 14-race program bringing in total handle of $112,504,509, topping the previous mark of $99,852,653 set in 2019.  – Additional reporting by Joe Clancy