Nestled between the big screen television and The Stronach Group’s tent, the historic horse and rider weathervane sits quietly atop its cupola in the Pimlico Race Course infield. Five feet wide, and made of aluminum, it’s coated in 55 years of Preakness history, paying tribute to each winner since 1966 as a replacement for the original. That iron piece lived on top of Pimlico’s clubhouse from 1909, when the tradition of painting the winning silks began, until it was damaged when the old clubhouse burned down (don’t worry, it’s in the track museum). 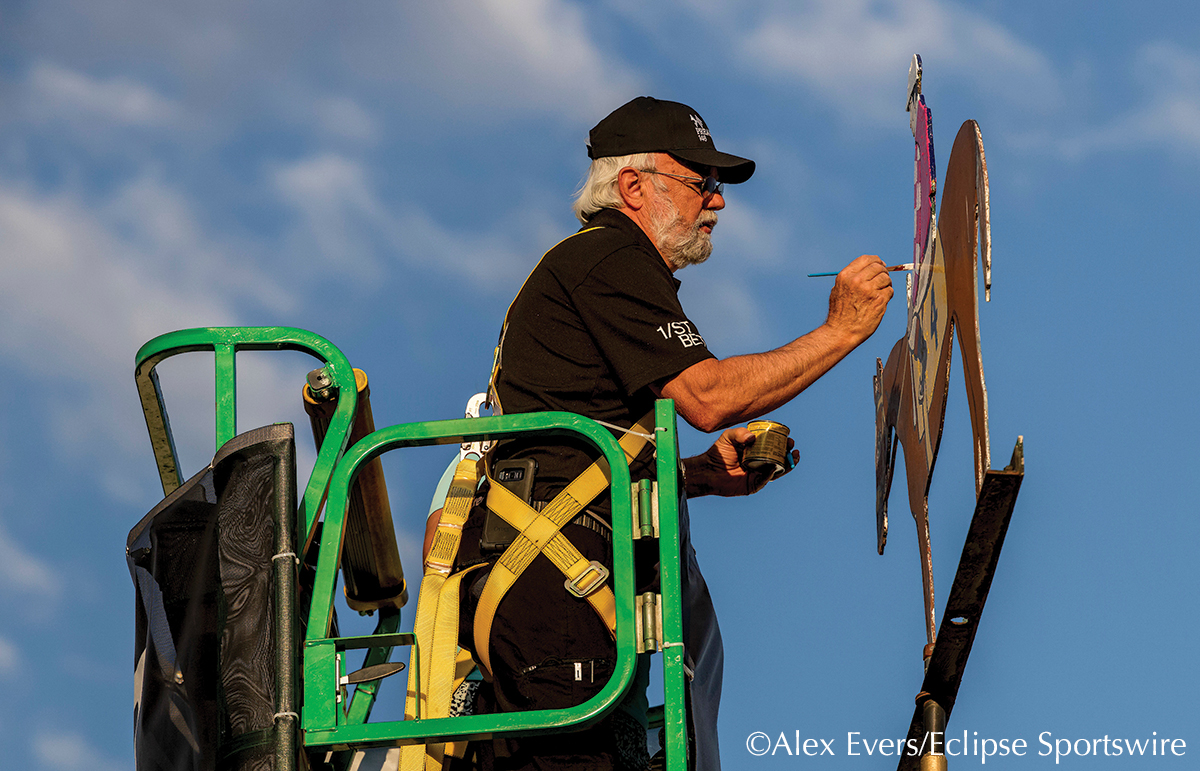 The tradition carried on with a replica of the cupola in the infield, topped by a weathervane that sits there today, now proudly wearing the pink and white silks of Rombauer’s owners and breeders, John and Diane Fradkin.

But the tradition, steeped into the weathervane with every brush stroke, wouldn’t be possible without the painters behind it. Last year, Lawrence Jones, a 32-year veteran of the job, retired and passed the paintbrush to Art At Work’s Dick Hageman.

The two men crossed paths just after Gary Barber’s War of Will won the 2019 Preakness. Once Jones finished painting the weathervane, he moved onto the iron jockey outside the stakes barn, but required assistance in accurately applying Barber’s pink silks which include an almost three-dimensional B on the back surrounded by a circle.

Jones wanted some help and reached out to the Maryland Jockey Club’s Erin McElwee. Hageman was the first call.

“He called and asked if I could do that for him in vinyl because those jockeys, with all the folds and everything that are cast into them, it can be hard to do a little fine-line circle like that. It was only a quarter-inch wide at the most, so I went by and did that for him one day,” said Hageman. “He called me up to thank me for doing it and we just started talking and we would sit on the phone for an hour every time, just talking away about how the sign business used to be and how it is now. We’re really fairly new acquaintances but I really enjoy talking to him, he seems like the nicest man in the world.”

When Jones started in 1988, he used an aging wooden ladder before upgrading to a hydraulic lift. He had done sign work for 35 years, including a long career with Baltimore City as a painter, before he retired in 2004, leaving his schedule open to paint recreationally and focus on his weathervane work each spring. Some arthritis and the change in date of last year’s Preakness, moved from May to October, prompted his retirement just before turning 80. And when that decision was made, he called Hageman with a thought.

“You know, Dick, I told you I was probably going to paint the weathervane one or two more years and then I didn’t know what I was going to do,” Jones said. “I had my contract to do it in May, but I’m 79 and I don’t think I want to go out there in October to do it, so I’d like to give you the job since you still have lettering brushes.”

It was an honor. 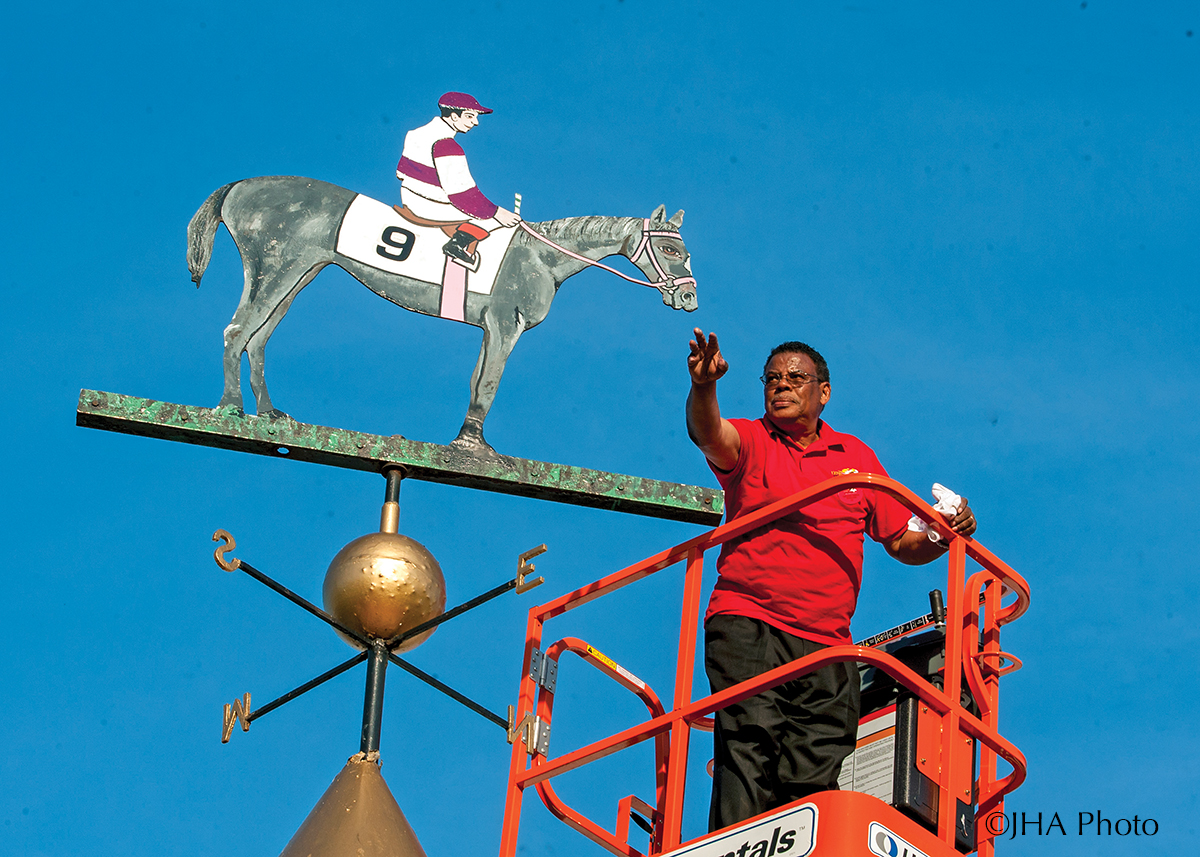 “When Lawrence Jones called me and said he was turning the job over to me, I swear you could have knocked me over. When I got off the phone, I could barely speak to tell Vicky, my wife. I really didn’t think I would ever get the opportunity to do it and I can’t thank him enough for trusting me to follow in his footsteps.”

Hageman was born in Washington, D.C., but grew up in College Park, Md., getting his first taste of the sign business in college as a freelance screen printer before diving in full-time with Arcon Screen Printing in 1981. Among other jobs, the company handled sign work for the Maryland Jockey Club’s racetracks.

In 1997, Hageman left Arcon to join Art At Work, a sign company created by his wife Vicky just two years prior. Originally in Beltsville and now in Jessup, the two-person family business gradually took over sign work at Pimlico and Laurel Park. The work covers all corners and levels of importance. Years ago, then track superintendent John Passero asked Hageman about painting the 124th Preakness logo on the grass in the infield.

“Sure I can,” Hageman answered.

“Have you ever done it before?” Passero countered.

Hageman and his team have been doing it ever since.

Friends think it’s all pretty heady, doing graphics and sign work for one of Maryland’s signature sporting events. Of course, there’s far more to the job. “It keeps me in check to know that I also make a lot of signs that just say Men’s Room,” Hageman said.

As a man so closely connected with the Maryland Jockey Club over the past few decades, it’s only fitting that Hageman serve as the new weathervane painter, taking his first ride on the lift last October when Swiss Skydiver battled Authentic down the stretch and prevailed by a nose in a delayed, fanless Preakness, due to the Covid-19 pandemic.

Hageman couldn’t shake the bizarre feeling of being able to drive right onto the infield prior to his painting debut, with only the winning connections, TV cameras and facilities staff for an audience.
“Last year, based on what the facilities guys were yelling at me, I was going awfully slow,” he said. “They were giving us a lot of grief, ‘Lawrence Jones would have been done by now, he’d be back at the stakes barn painting the jockey,’ so it was some good-natured ribbing, but it really was true. It was sort of nice to do the first one with nobody there.”

This year, he was more than ready. A week prior, Hageman received a list of the Preakness entries’ silks so he could start working on table signs, but the task also gave him extra time to study the various patterns and collect the necessary paint colors. Like Lawrence, he uses 1-Shot professional lettering enamel paint, which is durable and fade-resistant, along with a collection of lettering brushes and background brushes he’s gathered over the years.

By Preakness morning, the nerves had somewhat settled, but the prep work continued just in case.

“Saturday morning when I get up, while I’m having coffee, I do little thumbnail sketches of the weathervane with the silks pictures in my hand, so I can be like, ‘OK, well if I have to do this one, I think I’ll do it like this,’ ” said Hageman. “They’re only two or three inches tall, they’re just little, tiny thumbnail sketches, but it keeps me from thinking ‘What if it’s backward, what am I going to do?’ so it helps me mentally prepare for it.”

By 2 p.m., Hageman and his wife head to the track to take care of a few things in the building before crossing over the dirt, then the turf, to settle next to the cupola with pictures of the silks and nearly 30 cans of paint. A little judicious scraping to guarantee a smooth surface, along with a test run on the lift, were completed a few days prior, so all they could do was wait until the race ended.

“The two times I’ve done it now, we didn’t actually get to watch the Preakness, but we could watch it on our phones,” said Hageman. “As soon as the horses crossed the finish line, we were in the lift and going up, but we can’t really start painting until the race is declared official, so we were up there waiting. It’s a good thing everything went as we saw, because we only took the paint for those silks, so if Rombauer had been taken down for some reason we would’ve had to go down and get different paint.”

This year, he achieved his goal of finishing just in time to spin the weathervane around for the winner’s photo, completing the first side in less than 20 minutes, while cutting his overall time down to an hour and 20 minutes. Once both sides carried Rombauer’s silks, Hageman went back to touch up his freehand work, squaring up the blocks on the jockey’s arms, tightening the rest of the lines and painting in the saddle cloth. 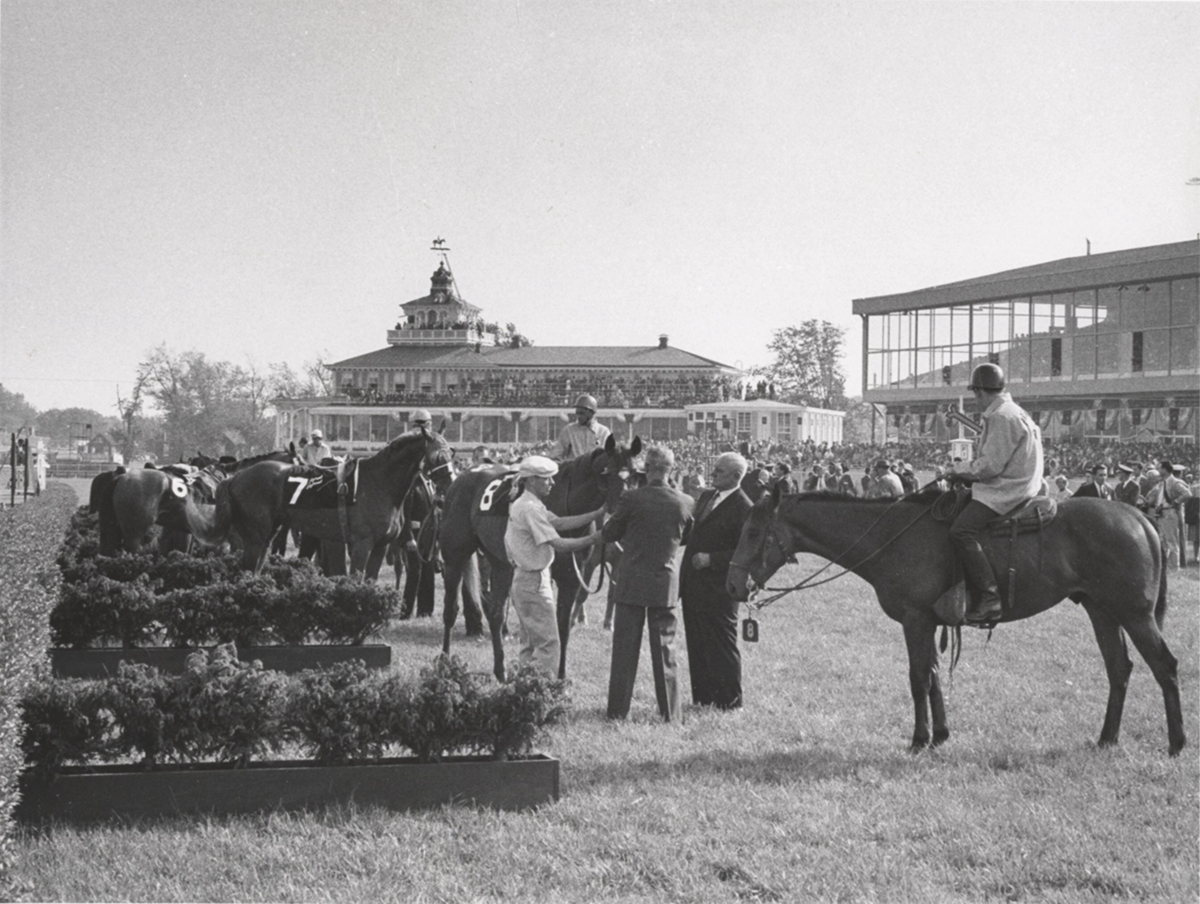 “One thing I did learn in October was when we’re up there on the lift, to not necessarily go by the picture I’ve got in my hands but to look down and see what the jockey is actually wearing because both times they had on a different cap than what was in the printed silks,” said Hageman. “You sort of have to interpret what you’re painting too because your pictures of the silks are front to back, but the weathervane is a flat jockey that you’re looking at from the side, so you have to interpret, ‘Well what would I be seeing from the side?’ and go from there.”

The following morning, Hageman headed for the stakes barn to take care of the iron jockey. Though the paint is durable, over time both the weathervane and the jockey begin to show their age in the form of peeling, which is maintained yearly with sanding, scraping and a few fresh coats of paint. Hageman scraped, sanded and was about to start with some magenta paint when a familiar-looking man walked up behind him.

“Did you paint the weathervane yesterday, too?” he asked.

“Oh, I’m Michael McCarthy,” said Rombauer’s trainer. “I really wanted to thank you. That was a real honor. I couldn’t believe the feeling when I saw my owner’s silks on the weathervane already.”

Hageman the painter – and racing fan – was blown away.

“To me, that was it, that’s all I needed to hear, and then we talked for a little bit,” he said. “For him to come over and thank me personally for doing it and tell me how it felt to be standing on the porch and look up and see it, it was like, ‘OK, well I accomplished it all this year.’ ”

Though his main job is finished, Hage­man will be back at Pimlico to paint both sides of the weathervane’s horse to resemble Rombauer’s bay coat, along with the jockey to reflect the appearance of Flavien Prat.

“One funny thing about the horse is that one side is a bay and the other side is gray,” said Hageman. “The horse is starting to show its age. As you can imagine, it’s got a lot of coats of paint on it. So far all I’ve done is the silks and saddle cloth, but I want to take on that personal responsibility for keeping the whole weathervane in good shape so I’ll go up and do that.”

Until then, the bay [or gray] weathervane, depending on the direction the wind spins it, will reside upon the cupola as a representative of a storied tradition, with Rombauer’s silks riding on until the 147th Preakness winner crosses the finish line next May and Hageman starts all over again. 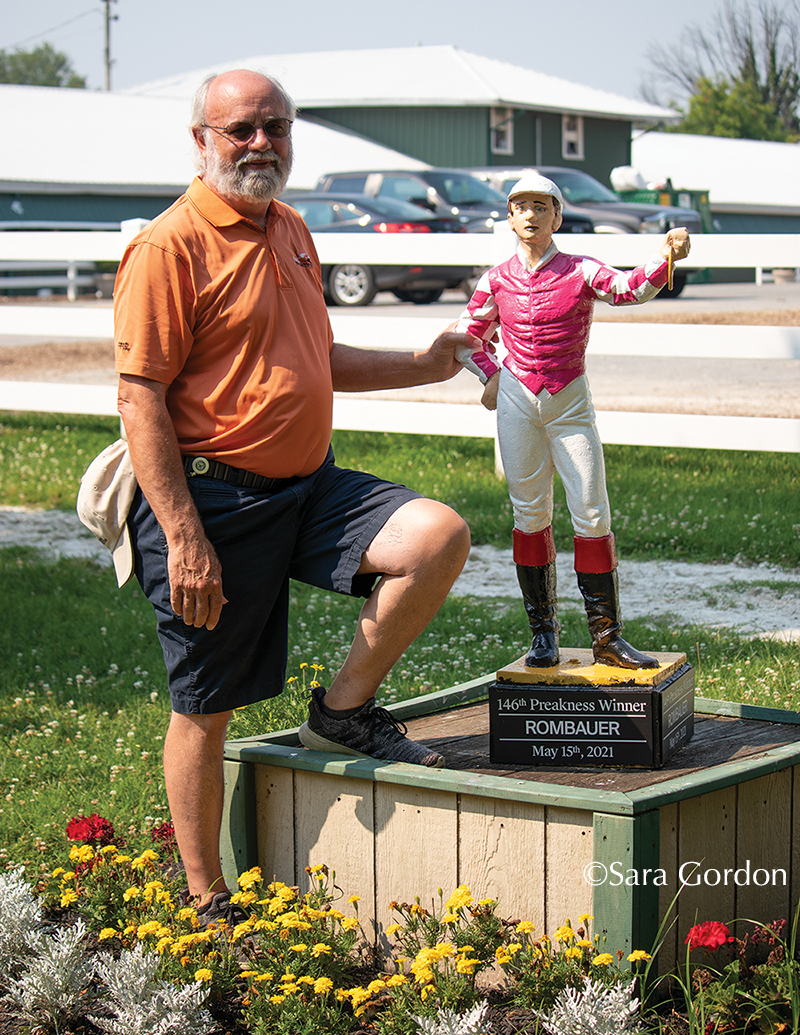