On The Go: Moores enjoy Whitney win by their Maryland-bred

Sabrina and Angie Moore, the women behind Maryland’s GreenMount Farm, looked like they’d run a marathon after watching Knicks Go – a horse Angie bred and her daughter Sabrina raised – solidify his spot atop the list of the best Thoroughbreds in training in 2021 with a victory in the 94th Whitney Stakes-G1 at Saratoga Race Course Aug. 7. 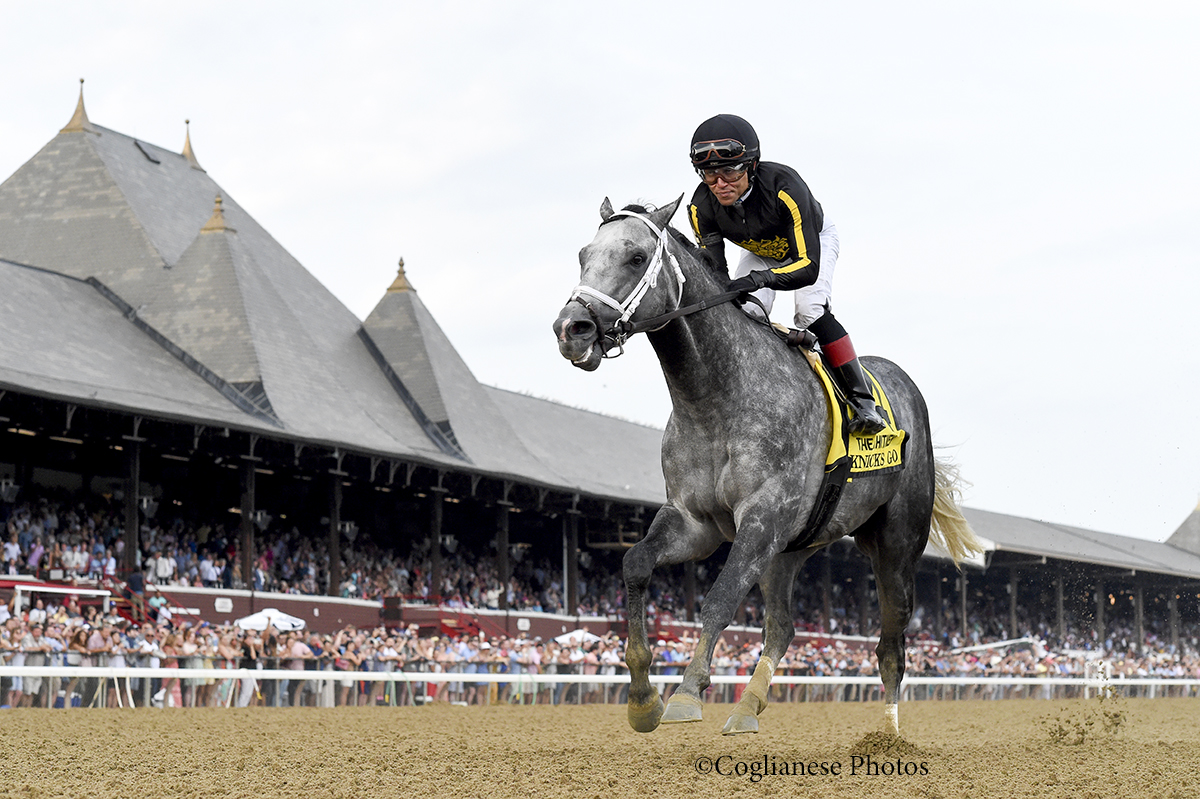 “That was terrible to watch, the anxiety of it,” said Sabrina, a tear rolling down her right cheek and goosebumps racing up her arm as the replay video ran on the infield big screen.

“I couldn’t get rid of my chills when he was coming down the stretch,” said Angie. “I was looking down saying, ‘Don’t lose it, don’t lose it.’ ”

He didn’t. Maryland-bred Knicks Go, sold by the Moores as a weanling in 2016, won his third graded stakes of 2021 and added to a career now counting eight wins and $5,368,995 earned in 22 starts for the Korea Racing Authority. The gray 5-year-old owns four Grade 1 victories – the Breeders’ Futurity at 2, the Breeders’ Cup Dirt Mile at 4 and now the Pegasus World Cup and Whitney at 5. He entered September as the top-ranked horse in North America and the early favorite for the Breeders’ Cup Classic-G1 in November.

Pretty heady stuff for a mother/daughter team from Baltimore County.

“I never imagined this,” said Angie. “I used to as a little girl imagine this, and in my wildest dreams think of things like this. But this is more than a dream come true. I tell her all the time, people work with horses their whole lives and never get to just one of the things we’ve made it to with him.”

You can thank Angie Moore, who rode in high school, worked at Pimlico on Preakness Day and eventually owned a few racehorses for the roots of this Thor­oughbred endeavor. Sabrina took all that interest to a new place, riding and working with horses, learning the business from sales consignor Bill Reightler and later opting to make a career out of it. When her grandfather – the former COO of Westinghouse Corporation and for a time the Secretary of Business and Economic Development for Maryland Aris Melissaratos – bought GreenMount in Glyndon, it all became a reality. Angie Moore claimed stakes winner Kosmo’s Buddy, more as a potential broodmare than a racehorse, in 2010. She bought another mare prospect, stakes winner Mystic Love, in 2013. And Sabrina was off and running, foaling mares, prepping horses to sell, taking on foaling duties and sales prep for clients and even starting a sales consignment.

Kosmo’s Buddy went to English Channel in 2011 and the resulting filly sold for $35,000 as a yearling. Next came Pinkprint, a Not For Love filly born in 2013 and kept by Angie Moore for a two-start (zero wins) racing career. A 2014 Super Saver colt brought $62,000 as a weanling, was named Super Buddy and won four times. Kosmo’s Buddy didn’t have a foal in 2015, but more than made up for it in 2016 with a Paynter colt who sold for $40,000 and became Knicks Go. He’s taken his breeders to the Breeders’ Cup twice, the Pegasus and now Saratoga.

The business plan at GreenMount called for selling weanlings or yearlings in the early stages, and even letting Kosmo’s Buddy go via private sale. It’s a business first, though moments like the Whitney threaten the direction.

“I try not to get really emotional when it comes to our horses, but he really did get started from the ground up at our farm,” said Sabrina. “It’s crazy to see him do what he’s done. I know I’m really fortunate to have something like this happen to me, especially so early. I know a lot of people try really hard and work their whole lives to try to do something like this.”

Knicks Go was 9 months old when he left GreenMount for the Keeneland November sale and – ultimately – stardom. Despite his ability, size and power, Sabrina thinks back to the early days.

“He wasn’t a jerk, but he was bad,” she said. “Well, a different kind of bad, like naughty. He had his opinions and we had a couple run-ins. We would bang heads every now and then.” 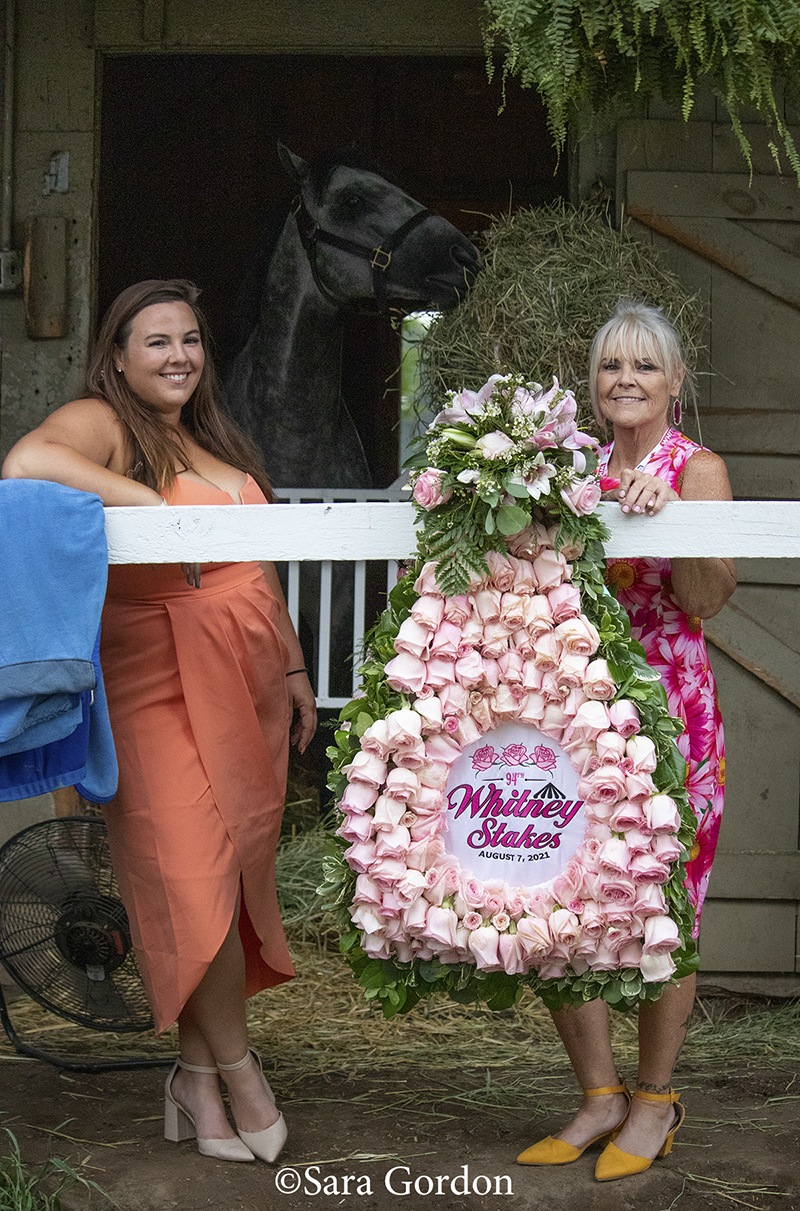 Northface Bloodstock spent $40,000 to buy the colt at Keeneland November, and pinhooked him as a yearling to Keeneland September – where KRA spent $87,000 to add him to the portfolio. KRA entered Knicks Go in the Ocala Breeders’ Sales Company’s 2018 sale as a 2-year-old, but withdrew him in favor of a racing career. Sent to Ben Colebrook, Knicks Go won twice as a 2-year-old and finished second to Game Winner at 41-1 in the Breeders’ Cup Juvenile-G1. KRA chased the Kentucky Derby in 2019, and Knicks Go weathered a winless, eight-start campaign with losses in six Grade 3 stakes.

“He didn’t have a good 3-year-old campaign, we got Derby fever and we paid for it the whole year,” KRA’s representative Jun Park said after the Whitney. “Ben did a good job, but we were desperate to find something to change.”

They changed trainers, sending Knicks Go to Brad Cox. Looking to reset the horse’s career, the trainer found a two-other-than allowance at Oaklawn Park in February 2020 and Knicks Go blitzed eight overmatched rivals. An ankle injury delayed his next start until October, when he won another allowance to catapult into the Breeders’ Cup and more. Since moving to the Cox barn, Knicks Go has strung together six wins in eight starts to emerge as one of the best horses in the world.

“This horse was a really good horse at 2, his Breeders’ Futurity was really impressive, he was 70-1 and ran away from those horses,” Cox said. “When I got him, I was like, ‘Wow, he’s a two-other than.’ ”

After he won, the goals changed.

Off the two-other-than and a three-other-than nearly eight months later, Knicks Go closed 2020 with the Dirt Mile win. He opened 2021 by wiring the 11⁄8-mile Pegasus World Cup at Gulfstream Park in January, and tried the $20 million Saudi Cup-G1 in February. Fourth there, and also fourth in the Grade 1 Met Mile in June, he dominated the Cornhusker-G3 at Prairie Meadows and made the Whitney look easy while drawing away from Maxfield by 41⁄2 lengths in a solid 1:47.70 for 11⁄8 miles. Joel Rosario crouched low leaving the gate, with his elbows on Knicks Go’s withers, and allowed the horse to find a spot on the lead. He stayed there, putting up quarter-mile splits of :23.42, :23.34 and :23.56 to get 6 furlongs in 1:10.32. The lead was 5 lengths after a half-mile, shortened up a bit to 11⁄2 on the turn but widened again in the stretch as Rosario looked for challenges under each arm.

Cox said the two-turn setup suits his horse, and blamed the two defeats this year partly on the one-turn configurations at Saudi Arabia’s King Abdulaziz (host of the 11⁄8-mile Saudi Cup) and Belmont Park (home of the Met Mile). In the latter, Knicks Go went off at 4-5 and finished fourth behind Silver State, By My Standards and Mischevious Alex – and helped convince Cox that Saratoga should be next.

“He trained every bit as well so when he got beat, I felt like I knew he needed the two turns to clear off,” Cox said. “The Saudi Cup was a mile-and-an-eighth but it was around one turn. You don’t know until you try, there were 20 million reasons to try Saudi and then there was a Grade 1 staring us in the face figuring we would be the favorite. We learned our lesson.”

The Moores went along for the ride, again, but have a stake in Knicks Go’s success – even if they no longer own him. As a Win and You’re In race for the Breeders’ Cup Classic, the Whitney came with a $10,000 nominator bonus to the Moores. They also received an $80,000 credit from WinStar Farm to use toward a future stallion season as part of the Kentucky farm’s breeders’ incentive program.

In addition, GreenMount is prepping a Tiznow filly out of Pinkprint for a yearling sale this fall. Bred by GreenMount and WinStar, the filly was second in her class at the Maryland Horse Breeders Association yearling show and is out of a half-sister to the hottest horse in the country. Pinkprint didn’t have a foal in 2021, but is in foal to More Than Ready for next year.

“I sold Knicks Go before the yearling show and I’m so bummed because it would be nice to see his name on there,” said Sabrina, who showed the champion (a Bernardini—Mystic Love filly) in 2020, of the yearling show. “For a while we were turning over the weanlings and selling the mare so I could get cashflow going, but now we’re able to keep them until they’re yearlings. That’s made a difference.”

GreenMount recently gained another Knicks Go relative, who won’t do much to help the bottom line.

“I just brought Super Buddy back and retired him from the track,” said Sabrina of the 7-year-old half-brother GreenMount sold as a weanling. “I’m not sure what I’m going to do with him, but he’s cool and the family is really sentimental to me. He looks exactly like Knicks Go.”

Call him a morale booster, and Green­Mount will surely need it. It’s not all Sara­toga winner’s circle photos after all. There’s work to do.

“I ran into [trainer] J.B. Secor the other day at home and he said that things seemed to be going well for me and I responded that I was very lucky,” Sabrina said. “He just came back with, ‘The harder you work, the luckier you get,’ so I’m going to go with that. I don’t know why this happened. I’ll enjoy it and I’ll just keep on working at it.” 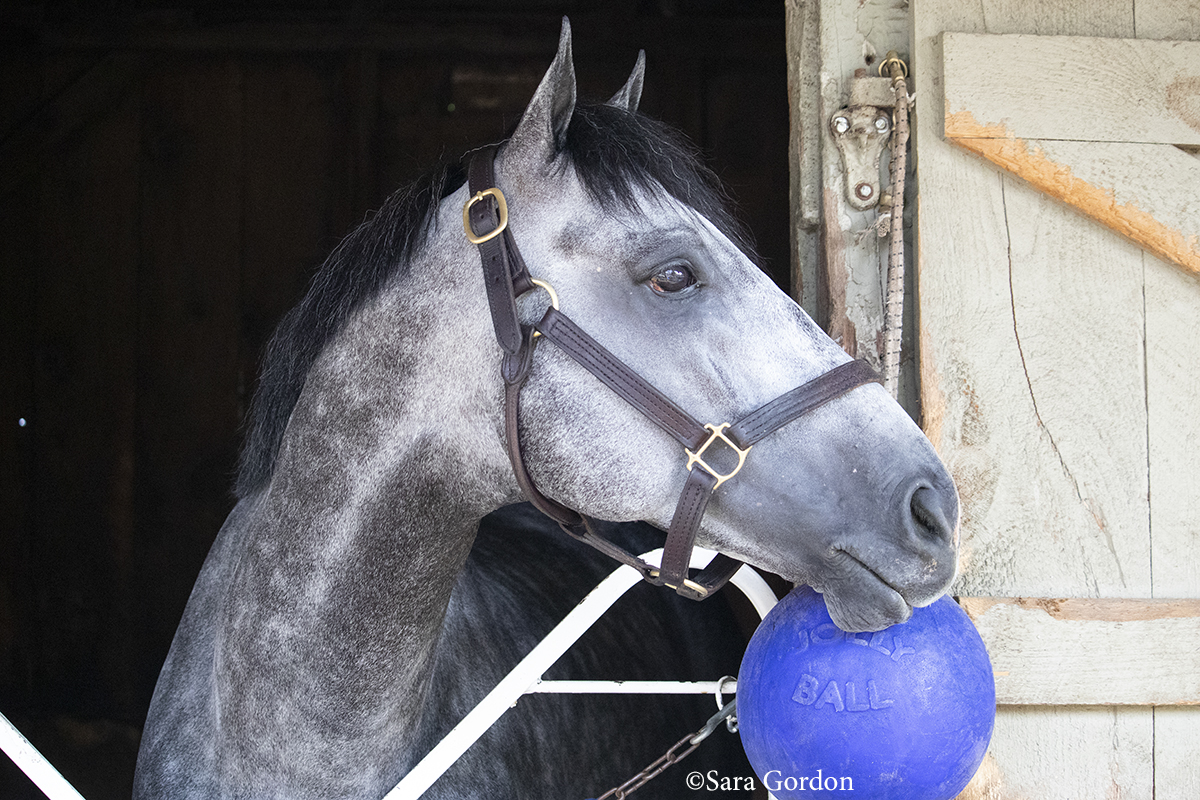