Knicks Go walked the shedrow, Brad Cox and his team said their last goodbyes and Liam Benson readied for the 1,000-plus-mile van ride from South Florida to Central Kentucky before one last check.

“Is there anything I need to tell the guys in Kentucky, anything we need to know about him?” said Benson, a stallion nominations assistant at Taylor Made Farm tasked with riding alongside Knicks Go in the back of a Brook Ledge van from Gulfstream Park to Nicholasville, Ky. 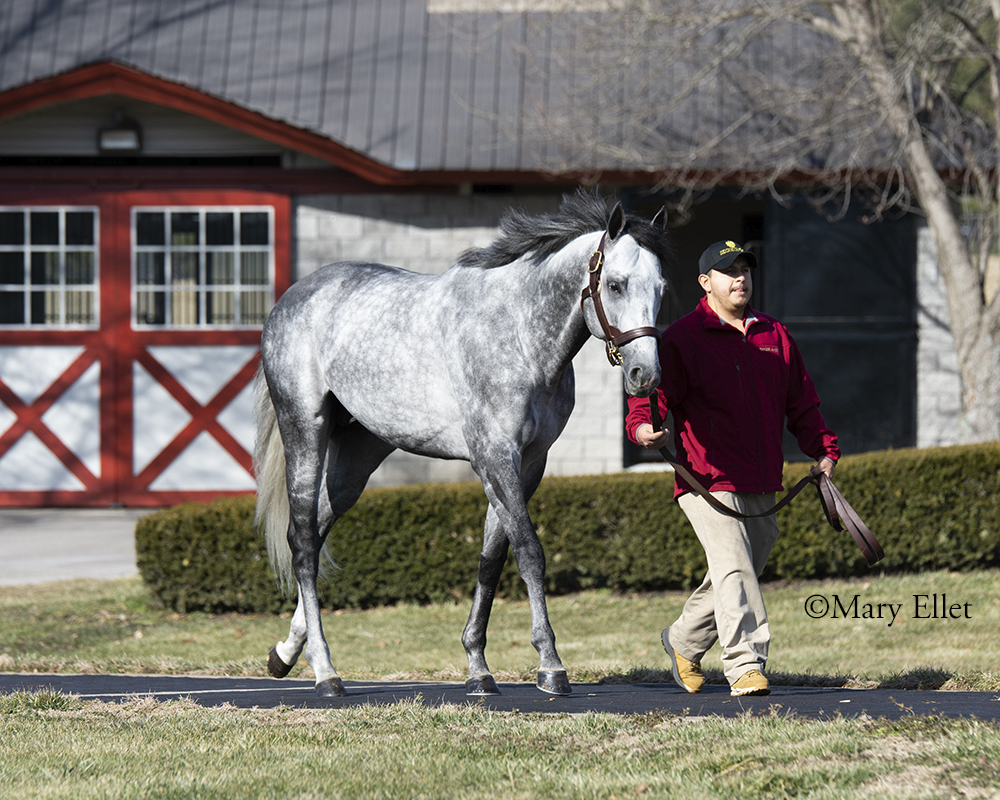 “Liam, this horse would eat rocks if you gave them to him,” said Cox, who trained Knicks Go the last two-plus seasons to victories in two Breeders’ Cup races and ultimately to a Horse of the Year crown and champion older dirt male title for 2021. “He won’t stop eating. It’s unbelievable.”

Benson believed it after the 18-hour trip – at times with temperatures dipping as low as 14 degrees from just after lunchtime on Jan. 30 until rolling up Union Mill Road to the Taylor Made stallion complex in time for breakfast Jan. 31.

“For what it’s worth, you talk about horses taking care of themselves, that horse drank three buckets of water and ate as much hay as I could throw at him,” Benson said. “You can’t ask for a horse to do much more than that. That’s one of the biggest things you fight with shipping, making sure they stay on their food and stay drinking water. If they do that, they’re usually OK. This horse never stopped. And it was unbelievable.”

Cox frequently remarked about Knicks Go’s appetite – for his feed and for training – during his 2021 campaign that resulted in him becoming the first Maryland-bred to win Horse of the Year since Cigar pulled it off in 1995 and 1996.

In addition to becoming just the second Maryland-bred to win Horse of the Year since the Eclipse Awards were launched by the National Turf Writers Association (now National Turf Writers and Broadcasters), Daily Racing Form and Thoroughbred Racing Associations (now National Thoroughbred Racing Association) in 1971, Knicks Go is the first divisional winner bred in the state to win a championship on the flat since 2004. Declan’s Moon earned the 2-year-old male honor that year, while steeplechase star Good Night Shirt landed that divisional crown in 2007 and 2008.

Knicks Go won the Horse of the Year and champion older male votes by wide margins – earning 228 of the 235 cast in the former and 232 of the 235 in the latter.

Knicks Go’s connections, including Angie Moore and her daughter Sabrina Moore who bred the gray son of Paynter and raised him at their GreenMount Farm in Glyndon, made multiple trips to the podium during the 51st Eclipse Awards Dinner Feb. 10 in a large tent at Santa Anita Park in Arcadia, Calif. The results were no surprise – Knicks Go won the Breeders’ Cup Classic-G1 at Del Mar, Pegasus World Cup Invitational-G1 at Gulfstream and Whitney Stakes-G1 at Saratoga Race Course in 2021. He won five of seven starts, earning $7,324,140. Those results, and his runner-up finish behind Life Is Good in this year’s Pegasus World Cup, helped Knicks Go to a record of 10-4-1 in 25 starts and earnings of $9,258,135.

“[Cigar] is legendary in his own right. I would be lying to you if I said I wasn’t going to feel really bad if he did ever break Cigar’s earnings record,” Sabrina Moore told the Maryland Jockey Club after the Eclipse Awards. “He’s held it for quite a long time. For Cigar to do what he did with the purses they had back then, it almost didn’t seem fair. To be in the same ranks as that horse is really neat, and it puts things into perspective. “I’ve kind of normalized him a little bit. It’s hard to explain, but it’s kind of just become normal for me now. It’s really hard for me to put into perspective that, oh wow, he’s really up there with these really, really nice horses. It’s unbelievable.”

Knicks Go wound up one of two Maryland-breds recognized at the Eclipse Awards.

Aloha West, winner of the Breeders’ Cup Sprint-G1 at Del Mar and runner-up in the Phoenix Stakes-G2 at Keeneland, was a finalist for champion male sprinter.

Bred by the late Bob Manfuso and his longtime partner Katy Voss at their Chanceland Farm in West Friendship, Aloha West finished second by 60 votes in the male sprinter voting to Jackie’s Warrior in the third closest tally of the year.

“I just sent a note to my board, told them to watch the show tonight and to be proud they’re breeding Maryland-breds,” Cricket Goodall, executive director of the Maryland Horse Breeders Association, said the afternoon of the Eclipse Awards. “The story for the Maryland-bred program is anybody can produce a great horse. The short path or long path, you can do it. A lot of it is lightning in a bottle and everyone acknowledges that.”

The Moores bred Knicks Go out of the multiple stakes-winning Outflanker mare Kosmo’s Buddy, who won five of 37 starts with eight seconds and nine thirds for $298,095. Kosmo’s Buddy made four consecutive appearances in the Maryland Million from 2007-10, and won the Turf Sprint in 2008. Angie Moore claimed the mare in 2010 and she and her daughter bred six foals from her, with Knicks Go the fourth, before selling her privately.

Knicks Go not only joined Cigar but Challedon, Horse of the Year in 1939 and 1940, well before the Eclipse Awards. Daily Racing Form first recognized champions in 1936 and did so on its own until 1950 when the Thoroughbred Racing Associations announced its set of champions. The list of champions bred in Maryland before the Eclipse Awards is small but select, with champion handicap mares Lady Maryland (1939), Gallorette (1946) and Conniver (1948) leading the way. In the era of the Eclipse Awards, Maryland-breds such as Devil’s Bag, Smart Angle, Heavenly Cause, Star de Naskra, Safely Kept and What a Summer carried the torch along with steeplechasers Life’s Illusion (1975) and the aforementioned Good Night Shirt.

Goodall noted the difference, in many of those cases.

“The difference with the former Eclipse Award winners, Breeders’ Cup winners or higher profile Maryland-breds we had – a lot of them were coming in to breed to the Windfields stallions, who consequently were foaled here, like the Cigar situation,” Goodall said. “There’s something about this year’s awards that make them more personal and seemingly more achievable.

“With Katy and Bob and Sabrina and her family and support group, it’s a good story. It’s not another, and I don’t want to name names, but somebody who has just dumped millions and millions of dollars in the business and they’re the ones standing up there to accept the awards. And they may be, but the little guys who produced them, those are great stories that deserve some acknowledgement. The breeders often don’t get a lot of acknowledgement, even on the big days, the graphics under the horses names with their pedigrees don’t even show the breeders. But at the Eclipse Awards Maryland will be in the limelight and we’re very appreciative of that. … So we should be basking in the glory as long as we can. Hopefully it will bring more people to Maryland.”

Knicks Go arrived at Taylor Made off his trip from Gulfstream just before starting his first season at stud for a 2022 fee of $30,000. He’s the co-fourth most expensive new stallion for 2022, behind only champion 3-year-old male Essential Quality ($75,000), Charlatan ($50,000) and Maxfield ($40,000). Knicks Go stands for the Korea Racing Authority, which bought him out of Peter O’Callaghan’s Woods Edge Farm consignment at the 2017 Keeneland September yearling sale. O’Callaghan bought him for $40,000 as a weanling from Bill Reightler, selling on behalf of the Moores, at the 2016 Keeneland November breeding stock sale.

Knicks Go, who raced at 14 tracks, spent time at Taylor Made shortly after winning the Breeders’ Cup Classic in early November to close his championship campaign. The Taylor Made team got to know the future stallion during his week-long stay.

“From the second he got off the van, he just walked into his stall, rolled, started drinking, eating, settled in,” Benson said. “We showed him to breeders for four or five days. He’d stand in that center circle and I swear, he’d stand there for two hours if you asked him to. He’d just pose. He was at ease, felt comfortable.”

What made it all the more remarkable to Benson and the Taylor Made team was that Knicks Go was just days removed from winning the 10-furlong Classic by 23⁄4 lengths over the ill-fated Medina Spirit, eventual champion Essential Quality and Grade 1 winner Hot Rod Charlie in 1:59.57.

“He was 46/100ths of a second off the track record at Del Mar when he won the Classic,” Benson said. “When horses run that hard, usually they come out of it, especially older horses, not lame but just kind of crabby in general. And here he was walking with this foot-long overstride. I wouldn’t say he was showing himself off, but he was walking with a purpose and he felt good.

“He’s not a huge horse but he’s so well balanced, it’s deceiving . . . When they first started pursuing him [before the Whitney], nobody had a good eye on him but we still felt comfortable having conversations with Jun Park and the KRA because Peter O’Callaghan pinhooked him as a baby. We’re thinking, ‘If Peter liked him as a baby you have to figure he looked good.’ Even though he was a son of Paynter, he’s not the kind of guy that’s going to take a gamble on Paynter unless he looks good. Especially at the price. He had to be a good-looking horse. I don’t think we knew how good looking he was. Not until he got off the truck. Man, he presents himself so well.”

Knicks Go figures to breed a book of mares in line with first- or second-year stallions by size, but also one of quality. Benson plans to send two mares he co-owns with partners to Knicks Go and identified the Moores and O’Callaghan as others with mares in the 2021 Horse of the Year’s first book. 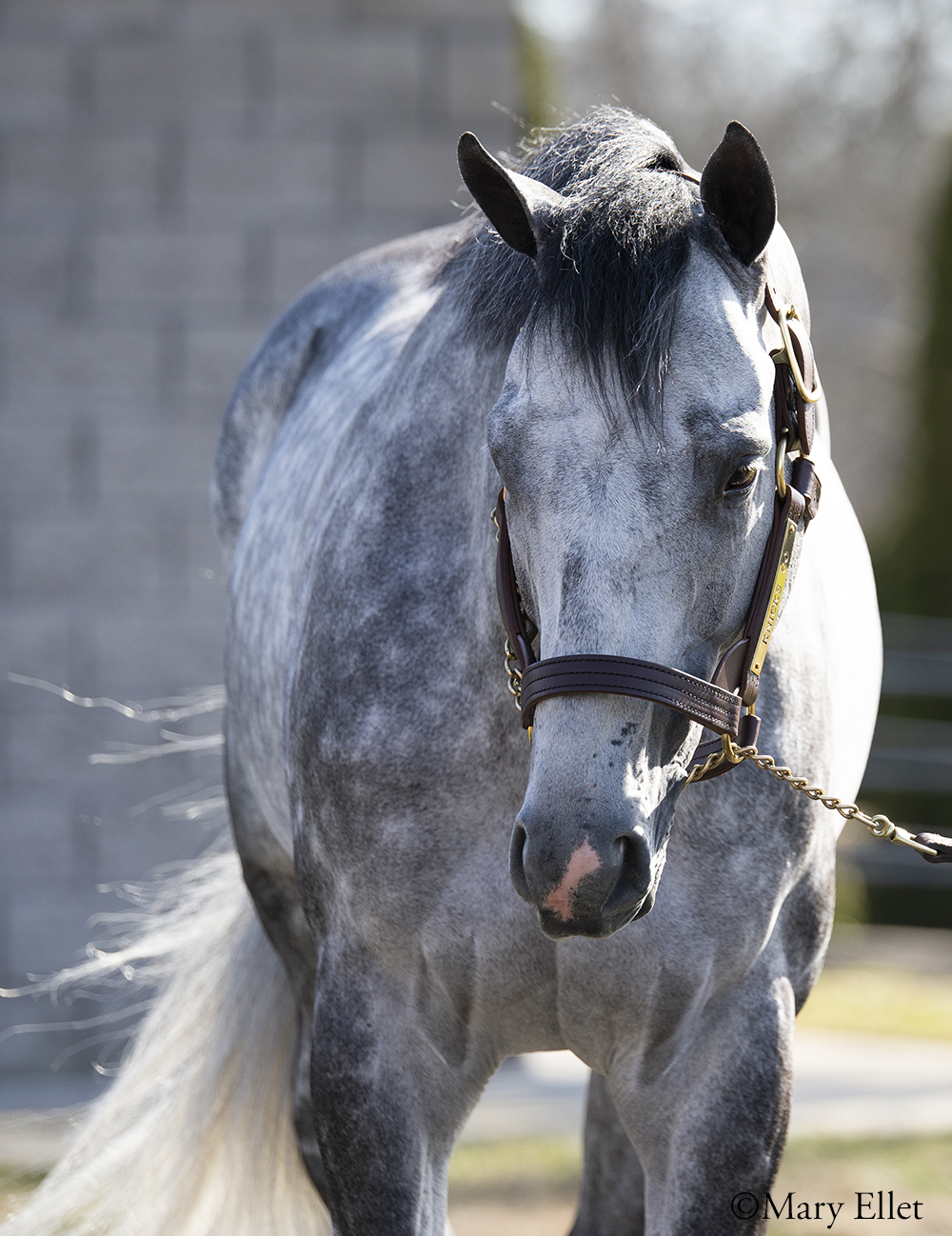 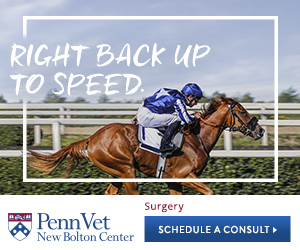