Anthony Hamilton graduated from Maryland’s Dulaney High in Timonium, and went to West Virginia University to study – well, something – and lasted one semester before coming home. His friends worked in restaurants, delivered pizza, started construction jobs, whatever.

None of that was for him, even if he didn’t know what was. While in high school, he’d worked for steeplechase (mainly) trainer Billy Meister and picked up side hustles helping Regina Welsh, Carol Kaye Garcia, Don Litz at the sales, Frannie Campitelli at the racetrack, anybody really.

But, despite a long line of horse people on both sides of his family, Hamilton wasn’t sure it was something he wanted to do.

Then his mother, Betty McCue, delivered an ultimatum of sorts.

“You’ve got to get a job,” she told him. “Figure something out.”

Hamilton went back to Meister’s, working with timber horses, foxhunters, Timonium runners, whatever. Next came a trip to the sale at Timonium and a series of, “Do you need any help?” questions. Maryland trainer Campitelli suggested a job in Florida. South Carolina horseman Kip Elser mentioned Camden. Hamilton looked at a map, literally, and chose the latter since it was closer to home. Jobs with Elser’s Kirkwood Stables and later Gerry Goswell turned into trips to Kentucky to work the sales there, a job with Kentucky veterinarian Larry Caudill and several more twists and turns before – at 39 – Hamilton works as an assistant to Hall of Fame trainer Shug McGaughey and helps handle some of the country’s top Thoroughbreds.

Hamilton credited all those jobs, plus the knowledge passed down from his mother, father Joe Hamilton, stepfather Jim McCue and plenty of others with preparing him for his current post.

“I was lucky that everything set me up for this, you couldn’t do this job without the background I had,” Hamilton said at Saratoga Race Course this summer. “I would have been lost without that. It’s a lot of horses to manage here, it’s a lot of people to manage. Expectations are high every day.”

Hamilton started in March 2020 just before longtime assistant Robbie Medina left for a job with Kentucky’s Blackwood Stables, and can be seen in McGaughey’s barns in New York and Florida with a short stop at Keeneland in the spring. In Hamilton’s time, the barn has included graded winners Civil Union, Code of Honor, Mrs. Danvers, Vigilantes Way, Pink Sands, Greatest Honour, Kathleen O., and First Captain among others. The 2021 stable reached $5.1 million in purse earnings, its highest total since 2015, and made 350 starts, the most since 1985.
Working for McGaughey, whose clients include some of racing’s biggest names led by mainstays the Phipps family and Stuart Janney III, was a dream opportunity.

“He’s a legend, right?” Hamilton said of McGaughey, a Hall of Famer since 2004. “I’ve never been afraid of work. Growing up in a barn you understand the expectations. I think I was lucky with Dad and Jim and Mom. There’s a right way to do something and that’s always been there. If you’re going to do something, do it right. It might take longer, but it’s the way to do it. That’s what we do every day here. We do things the right way.”

Hamilton’s father Joe worked for his father Ham Hamilton at George Swift’s Quail Run Farm outside Middleburg, Va., when Anthony was born. The family moved to Maryland for a job with Frank Bonsal and another with Frank and Ginny Wright. The Hamiltons bred Grade 2 winner Valay Maid, ran a sales consignment and divorced when Anthony was 10.

Betty married McCue, the Maryland Jockey Club’s track photographer. Anthony called McCue “a rock” and a “pretty special guy,” who helped a stepson navigate life and find a way.
Early experience came with Meister, a three-time Maryland Hunt Cup winner as a rider and trainer whose barn might include everything from a 14-year-old timber horse to a 3-year-old filly aiming for a $5,000 starter allowance at Pimlico.

“He knew his stuff with horses and worked hard,” said Meister, who also called the young Hamilton a “screwball” without really needing to elaborate. “He was a big guy, but was gentle with the horses, really good on race day. He got his stuff together and now look. It’s great. I’m really happy for him.”

Hamilton’s father Joe eventually moved to Kentucky and connected with Tony Braddock to launch Two Hearts Farm in Bourbon County. After working for Caudill, Anthony joined his father at Two Hearts and took over the training barn once the broodmare division got big enough. 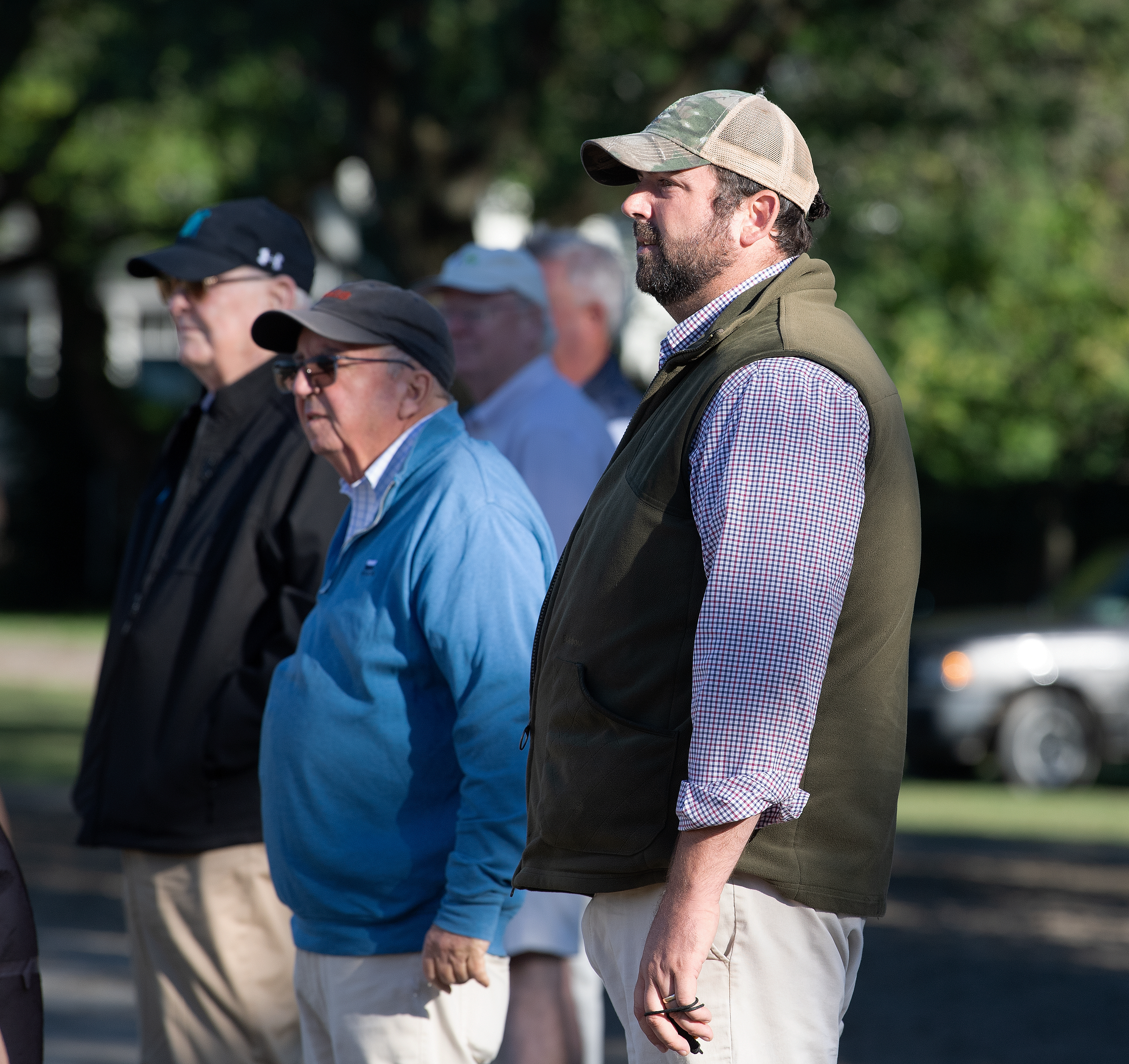 Mainly for Two Hearts, Anthony saddled his first runners in 2013 and won five races the next year. He won five again in 2015, headed by Fioretti’s victory in Keeneland’s Thoroughbred Club of America Stakes-G2 and a start in the Breeders’ Cup Filly and Mare Sprint-G1. Joe Hamilton didn’t live to see those achievements, as he died at 58 in January 2015. Anthony kept training for Two Hearts and other clients through 2018, then took a job with the Haughey family’s PTK stable late in 2019.

While working with the PTK horses at Payson Park Training Center in Florida the following winter, Hamilton caught McGaughey’s attention.

“Wouldn’t this guy do in our outfit?” McGaughey asked Medina one morning.

“He would,” Medina answered.

And Hamilton was hired. Then Medina took the Blackwood job, and Hamilton moved up a notch on the organizational chart.

“Starting off, Anthony was probably a little bit nervous by what was going on and the type of horses we have,” McGaughey said, “but he’s good about it all now. He’s a big part of what we do.”

McGaughey, who saddled his first runner in 1978 and counts stars Personal Ensign, Lure, Easy Goer, Inside Information and Heavenly Prize among a long list of greats, made a point of setting a bar for Hamilton.

And the trend is excellence.

The McGaughey barn includes divisions in New York or Florida (depending on the time of year), Kentucky and Maryland’s Fair Hill Training Center. Well-bred and well-purchased 2-year-olds join the stable every year for major clients. Phipps and Janney horses are there. So are others owned by Joe Allen, Peter Brant, Courtlandt Farm, Gainesway Stable, LNJ Foxwoods, West Point Thoroughbreds, Woodford Racing, Emory Hamilton, the Farish family, Andrew Rosen and others.

“He’s very, very valuable to me, I’m crazy about the guy,” McGaughey said. “We have a great relationship. He’s not afraid to stick his head out, which I like. You need somebody like that. He’s very well-liked by my clients too, which is a plus. He’s outgoing in the right way. He speaks to them, talks to them about the horses, I trust him, all that.”

McGaughey credited Hamilton’s experience as a trainer, and all the other background, with helping him thrive in a job that can go in many directions at once given the horses and people involved.

“He’s organized well, and he thinks ahead,” McGaughey said. “He’s a very good horseman, been around horses his whole life. He’s got a good man under him now too in Adam Neuman. Anthony is mentoring him and to me that’s great. You have to have that too.”

Don’t ask Hamilton to pick a favorite horse in the barn. They all matter.

“Performer was a really cool horse to be around,” he said of the Grade 3 winner who won all four starts in 2019. “Being a Phipps horse, the history there. You grow up with the black and cherry. You see it. He was the first horse I saw on the track where I was like, ‘This is a racehorse. This isn’t never-won-three for 15 at Turfway.’ And [2021 Fountain of Youth-G2 winner] Greatest Honour was the first horse that we got to get that Derby trail kind of feel. That was fun. Kathleen O. was obviously fun making that run to the Kentucky Oaks.  Civil Union was the first Grade 1 winner I was around.”

He could keep going and even puts Dripping Gold on the list. In the paddock for his debut at Saratoga in 2021, the then 2-year-old kicked Hamilton in the face. The horse won, the man ended up with stitches above his left eyebrow but didn’t miss a day of work and led another runner to the track a day later.

“We won’t let that happen again,” McGaughey said. “The next day, he was right at it. He wanted to go over that day, said he wanted to see the horses run, but we weren’t going to let him do that.”

“We were so happy,” said Betty McCue. “We don’t get to see him as much as we’d love to, so to have him win a race like that at Pimlico was extra special. We couldn’t be prouder of him.”

She couldn’t help thinking about the college dropout she told to get a job, or the little kid who rode in leadline and walk/trot classes even though he didn’t want to. Young Anthony’s idea of riding involved far simpler tasks.

They are now and he can pay at least partial credit to a tall (and wide) family tree.

Then Betty Hughes, his mother grew up foxhunting, showing and riding in ladies timber races. A retired second-grade teacher, she’s known today for encouraging numerous young riders with a string of race ponies, a lesson business and an ever-changing group of retired racehorses headed to new careers. Her brother John managed Jonathan Sheppard’s broodmare and foaling operation in Pennsylvania for years. Their father Puller Hughes is remembered with a scholarship given in his name at the Warrenton Pony Show each year.

The Hamilton side of the family goes through horses too. Anthony’s grandfather Ham Hamilton rode Saddlebreds in Louisville, Ky., and became a jockey despite his 5-foot-9 stature. Race-riding didn’t last long, but he rode in the mornings and became Del Carroll’s assi
stant trainer. Ham Hamilton later had horses for Michael Phipps at St. Lucie Training Center (now Payson Park) – not quite full circle for the Hamiltons, but about as close as you can get. Grandmother Sally Hamilton was one of the first women – if not the first woman – to be licensed at a pari-mutuel racetrack while working in Kentucky and Ohio. She ponied horses while seven months pregnant.

“We’ve all just kind of surfaced,” said Cathy Sweezey, Joe Hamilton’s sister. “All the offspring are bubbling up somewhat successfully. I’m very proud of that. It was all very blue collar, but look where it’s gone.

“I think it’s in your DNA. I was a pretty good exercise rider, Sarah’s a brilliant exercise rider. Joe, Anthony’s father, was an unbelievable horseman. Every generation moved up the ladder a little bit. It says a lot about the horse business, doesn’t it? It’s afforded all of us a great way of life and a great living.”

Anthony follows all those footsteps made by Hamiltons and Hugheses, quietly making marks himself and with a young family. His wife Kristen Goncharoff co-bred Grade 2 winner Sleepy Eyes Todd and is the racing manager for eFive Racing Thoroughbreds. Her father Tom managed R.D. Hubbard’s Crystal Springs Farm in Kentucky and New Mexico. Anthony and Kristen own a home in Kentucky, but aren’t there much. They have a 2-year-old son Hughes and won’t think too far ahead when it comes to next steps.

“We’re just taking this as it goes,” Hamilton said. “Obviously this is a good opportunity. As for where this takes me, we’ll cross that bridge when we need to cross it. I think Shug’s pretty happy. I know we are. It’s a new barn, a young barn, and we’ve got some nice horses coming along that we’re excited about.”

Besides, those restaurant and construction jobs weren’t going to lead to a spot in McGaughey’s barn. If he’d taken that path, where would Hamilton be now?