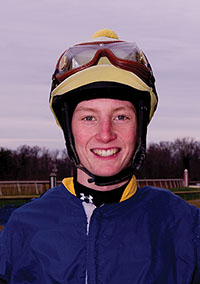 Trevor McCarthy didn’t search for a description, didn’t hesitate for an explanation.

For a young man, there is no better word. Most 18-year-olds, fresh out of high school, use the word to describe a party, a girl, a car, a game, a Tweet. For young jockey McCarthy, the word described his career moment, a four-win extravaganza at Laurel Park on New Year’s Day.

The seven-pound apprentice partnered favorite Kincaid for Dale Capuano to win the second, hustled second choice Merryland Moon for Mike Trombetta to win the fourth, upset the fifth with Bluegrass Kopp for Ferris Allen and won the seventh with Proud Daddy for Linda Albert.

Four wins for four trainers on a competitive circuit to open the year?–?yes, awesome.

Trevor McCarthy is the son of retired jockey Michael McCarthy, winner of 2,907 races in a long, respected career that finished in 2002. Dad combined good hands, diplomacy, dedication and street smarts to produce six consecutive 200-win seasons while riding predominantly at Delaware Park. McCarthy managed to fold his lawn-chair frame into an aerodynamic shell, becoming one of the most stylish, successful jockeys in the country. He could get horses to settle in the morning and run in the afternoon. McCarthy was as good an agent as he was a jockey, working the backside like a mayor running for reelection. All the while, his youngest of three children watched, noted and made plans.

“I’ve always been into it, I couldn’t see myself doing anything other than the horses,” Trevor said. “I remember watching him ride big races, going to the jocks’ room, going to the Meadowlands at night, stuff like that. He’s taught me everything. I can’t list it all. So much advice, it’s really helped me out. Saving ground, looking good, just a lot of technique, things in the gate, he taught me to be polite.”

Michael McCarthy says he had no choice when it came to Trevor’s chosen profession. He remembers the first time his son showed interest. He was sitting at the dinner table, Trevor looked up from his vegetables (the rest of the family ate what Dad ate) and asked what it felt like to be in the gate. He was 6. And serious.

Other mornings, Trevor would get dressed and wait for his father to get up and go to the track.

“You know when you feel somebody creeping up on you and they’re looking at you, he was standing by the bed at 3:30 in the morning, ‘OK, Dad, let’s go to the racetrack,’ ” Michael said. “That’s what I’m dealing with, with that kid, he just wanted to be a part of it. I’m so happy for him because of that, it’s all he ever wanted to do. Just get out there with the horses and ride the horses. Whatever it takes to get to the track, that’s his mentality.”

Michael McCarthy trained horses for seven years after he retired from riding races. Trevor was there, shed-rowing horses when he was 9. Yes, 9. From there, he got on the lead pony, then galloped for Graham Motion at Fair Hill Training Center and began riding as an amateur through the Amateur Riders Club of America. He rode his first race?–?won his first race?–?in October.

Christa McCarthy told her son he could do anything he wanted after he graduated from high school. Trevor graduated from Alexis I. duPont High in Wilmington, Del., in May and was at Parx by October. Trevor began with a bang, but then was put on the back burner, by design. Dad made sure son gained experience without compromising his apprentice year which starts after five wins. Trevor won his fifth race Dec. 2 and moved his tack to Laurel. Joined with Scott Silver, agent for Jeremy Rose, Trevor plans to stay at Laurel for the rest of the year, aiming at an Eclipse Award for leading apprentice, if possible.

“Well, you know, we had a rough start at Philly, we rode a lot of bad horses but in the last month, when we came to Laurel, it’s picked up a lot, we’ve got a lot of business and a lot of wins down there,” Trevor said. “My dad’s really proud of it. I won my fourth on Proud Daddy, so a lot of people called and told me he must be proud. I always saw my dad doing it, I always looked up to him and when he started training, he taught me how to do it. My dad is loving it.”

Michael McCarthy knows the game; the good, the bad and the ugly. At 5’9½”, McCarthy honed his body to the bone, practicing moderation and discipline while escaping Finger Lakes, landing at Philadelphia Park and flourishing at Delaware Park. He knows the deprivation, the politics, the risk, the hot box, the falls, the hours . . . yeah, the good, the bad, the ugly.

Thoroughbred racing is the ultimate catch-22. Horsemen love their horses, but they put them at risk. Owners love the sport, it costs crazy money. Jockeys love to ride, they diet, fall, ride seven days a week. Fathers, well fathers, love their sons.

“People say you must be a proud dad. . .
and I am in every sense of the word, but when I watch a race, I know so many things can happen negatively, I want to be like, ‘yeah, yeah, do this, do that,’ and instead I’m like ‘OK, look out for this, look out for that,’ ” Michael said. “I was more like that in the first two months, when we were just really preparing him for everything. I’m better now, my fear is subsiding a little bit, but I still get some jitters. I don’t know. I don’t know. I’m sure all fathers would feel the same way.”

“When you called, I thought, this is a little quick for him, here’s more expectations,” Michael said to a writer. “I think the expectations were so high for him, he won with his first three mounts, then he went 2-for-70 or whatever, but we literally gave him three horses with chances, and those three all did good. I was OK with that, because I knew it was going to take him a few months to get his legs under him, timing-wise it was perfect, we wanted to get him started close to the first of the year, so maybe he can have a chance at winning an award if it’s possible.”

Michael has helped choreograph his son’s career, putting his experiences and connections to good use, but he also apologizes if he sounds like a crazy father, overzealous and consumed by his son’s success. He’s not Earl Woods, driving his son Tiger to become champion of the world. He’s a retired jockey who might be able to help his son become a successful jockey.

“We made a little plan and said ‘let’s try to do this.’ To me, if he goes out there and is happy just being a jockey, making a living, I’m happy for him,” Michael said. “If he wants to go and be a big-time jockey and set huge goals for himself, hey, that’s fine too. That’s the kind of parents we are to him.”

Michael McCarthy would like to see his son make it big. But for his son, not for him.

“He has put that to the side,” Michael said. “He realizes, ‘I might not be my dad or as good as my dad but I’m going to be the best that I can.’ He told me that the other day and I said, ‘Great Trev, but look what you did today, you’ve already made a name for yourself. I’m so proud of that.’ That’s a big hurdle for him. So many jockeys’ sons can’t meet the expectations of their fathers, I feel bad for that situation when it happens to kids. I have a fear of that.”

He said it with respect, not audacity or arrogance. A boy trying to make it big, a son trying to follow his father. The boy doesn’t know what’s out there, the father certainly does.

A few hours after answering his phone the first time, Michael McCarthy called back and left a message. Not as a jockey, not as an agent, not as a trainer, but simply a father.

“Hey, it’s Michael McCarthy calling back, listen, you know I just wanted to say that sometimes this business consumes me and I can sound negative at times, but I just wanted you to know, my wife and I are extremely proud of Trevor,” McCarthy said. “I just wanted to make a notation of that. He’s carrying on our name and my name quite well, he carries himself with so much class, I couldn’t be any more proud of having my son do what he’s doing. I hope you can put that in there.”