The Woodlawn Vase is awarded to the Preakness Stakes winner each year and is considered by many to be the most valued trophy in the United States. One appraisal places the vase’s worth in excess of $4 million (more than double the purse of the actual race in 2014). Others suggest trying to put a price on the Woodlawn Vase would be akin to assigning a dollar figure to happiness or a sloppy kiss from a puppy. 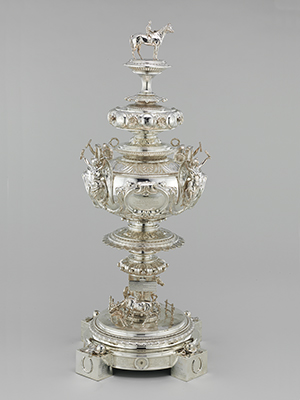 “The press and I guess some of the people always want to try and quantify works of art such as the Woodlawn Vase,” said art collector, designer and Baltimore Museum of Art trustee Stiles Colwill. “Nobody such as myself or any museum curator would ever put a price on a completely unique piece of art. There is no replacement. This is a one of a kind.”

Echoing Colwill’s sentiments is Tom Chuckas, president and chief operating officer of the Maryland Jockey Club, the vase’s keeper for nearly a century.

“There is no trophy in American sports that is more revered, or has a deeper tie to this country’s historical or cultural roots than the Woodlawn Vase,” Chuckas said. “We remain humbled and honored to be the custodian of such a spectacular work of art, with such a rich heritage.”

Contributing to this undefinable worth is the unprecedented journey the vase took before its arrival at Pimlico. Close your eyes and imagine a colorful cast of racing characters set against thundering hooves, stunningly crafted sterling silver, war, buried treasure, underground horses, heavily guarded trains, Native Dancer, vaults, famous horse skeletons and white-gloved National Guardsmen. . . you are on your way to seeing the history of the Woodlawn Vase.

The story begins with Kentucky native Robert A. Alexander. He inherited a fortune from an uncle in Scotland, becoming one of the wealthiest men in the world. In 1858, he purchased land just east of Louisville, Ky. and a year later opened the Woodlawn Race Track.

The track flourished as horses from across the country made their way to its starting gates. In 1859, Alexander commissioned Tiffany and Co. of New York to make a trophy for a 4-mile race. This was to be a challenge cup granting the winner the opportunity to take the trophy home while requiring that it be offered to another race winner within a year. The Woodlawn Vase would only find a permanent home if a race were won three consecutive times. The trophy basically had wheels and could end up at any race chosen by the current winner.

In 1860, New York’s Wilkes’ Spirit of the Times, reported that “Messrs. Tiffany & Co., the celebrated jewelers, on Tuesday last, sent to Louisville, KY a massive silver vase, for the Woodlawn Race Course Association, the most elegant of its kind ever made anywhere in the world. Its entire height is 36 inches, its weight is four hundred ounces, and its value $1,500.”

The elegant design tells the story of horse racing at Woodlawn. Considerable attention was paid to detail by using miniature racing saddles, jockey caps and horses as decorative features.

This was not an easy task for the time, according to Colwill: “If you look closely at those little horses, you should be amazed at the accurate detail because those miniatures were based on nothing but what little engravings were available?–?an astounding accomplishment.”

A full figure of the horse Lexington, complete with a jockey, is perched atop the trophy. Lexington was Alexander’s prize horse and an appropriate representation of what was happening at Woodlawn at the time. Interestingly, no one knew then that Lexington would eventually sire the horse Preakness who, after winning the first Dinner Party Stakes at Pimlico, became the namesake for the Preakness Stakes, the second leg of the Triple Crown. For that matter, nobody knew that one day Lexington’s bones would be on display in a museum either.

The first winner of the vase was the colorful owner Capt. Thomas G. Moore with his mare Mollie Jackson. Moore won the race again in 1862 with Idlewood and the Vase remained in his possession when the Civil War temporarily stopped all horse racing in Kentucky.

Fearing the vase would fall into the hands of Confederate soldiers, Moore buried it along with his family silver on his farm. Allegedly, Moore’s associate, our friend Robert Alexander, also hid things underground including his horse, Lexington, fearing confiscation by Confederate cavalry.

After the war, the vase was dug up and remained in Ken-tucky until 1878 when the notorious Dwyer brothers of Brooklyn, N.Y., won the American Stallion Stakes. The Dwyers were cut from a different cloth than most of those owning and running stables at that time. Hall of Fame trainer Samuel Hildreth described the Dwyer brothers as “products of the days when fellows had to use their biceps as well as their brains to get everything they got. . . No wonder they moved on from their humble station as neighborhood butchers to become the owners of one of the greatest racing stables the turf has ever seen. . .”

The vase made its way to races courses across New York including Sheepshead Bay, Jerome Park and Morris Park. The trophy also spent time with the New Jersey Jockey Club at races held in Elizabeth. In 1917, Thomas C. Clyde, two-time winner of the Woodlawn Vase, formally gave it to the Maryland Jockey Club. Clyde’s motivation was based on the notion that having the vase at a central location in Maryland might encourage the renewal of sectional rivalries “that lent such interest to racing in the good days when it was more of a sport and less of a business.”

To adjust to the new tradition, smaller scale replicas, approximately one third the size of the original, were created by the renowned Stieff family of Baltimore and were given to the winners of the Preakness Stakes. This tradition continues today.

In the years immediately following Mrs. Vanderbilt’s “return to sender” maneuver, the Maryland Jockey Club stored the Woodlawn Vase in a local jeweler’s vault. On the occasion of the Preakness or sometimes just during the racing season, the trophy was displayed in the Old Clubhouse at Pimlico where the public was allowed to see and even touch the vase. This is brilliantly depicted in one of Vaughn Flannery’s paintings of the Old Clubhouse at Pimlico. For the most part, however, the trophy remained hidden, tucked away safely in a vault.
Eventually the Woodlawn Vase was made available to the public through venues such as the Baltimore Museum of Art and the Maryland Historical Society. Chuckas says the Maryland Jockey Club was pleased with this development.

“The Woodlawn Vase is such a popular fixture during Triple Crown season,” he said. “We are fortunate to be able to share its beauty and significance with the community throughout the year with the support of partners such as the BMA and Maryland Historical Society.”
At the Historical Society, the vase was displayed in the Beard Pavilion, bringing the history buff and racing enthusiast together in an ideal environment.

Burt Kummerow, president and CEO of the Maryland Historical Society recalled, “We were thrilled to have the Woodlawn Vase on display. Horse racing is an important part of Maryland’s rich history and we are the keepers of Maryland’s history. So it was a perfect fit.”

The Woodlawn Vase is now housed with the Woodward collection at the Baltimore Museum of Art. The Woodward collection is considered one of the finest collections of British sporting art in America and the Woodward family is an integral part of Maryland’s racing history. The family re-established a Thoroughbred tradition at Belair Mansion in 1907, producing Triple Crown winners Gallant Fox and Omaha as well as the legendary Nashua, winner of the Preakness in 1955.

Along with the vast collection of trophies won by Belair Stud stands the Woodlawn Vase in all of its glory, waiting for that third week in May when it gets to spend a day at the races.

For more than 20 years, the Woodlawn Vase has been escorted by the Maryland National Guard in full dress uniform, with white gloves for proper care during transportation, to the infield winner’s circle cupola where the vase stands under guard until its presentation following the Preakness. There is a changing of the guard every 15 minutes. At the end of the ceremony, the vase is transported back to the Baltimore Museum of Art by armed guards for safekeeping–an appropriate way to treat an irreplaceable piece of art with a history as sterling as the silver from which it is made.

So when you are watching this year’s Preakness and broadcasters cut to a shot of the gleaming Woodlawn Vase, think of the many miles it has traveled, the hands that have held it, the horses who have won it, the places it lived and the stories it could tell. Even better, close your eyes and envision all that rich history.