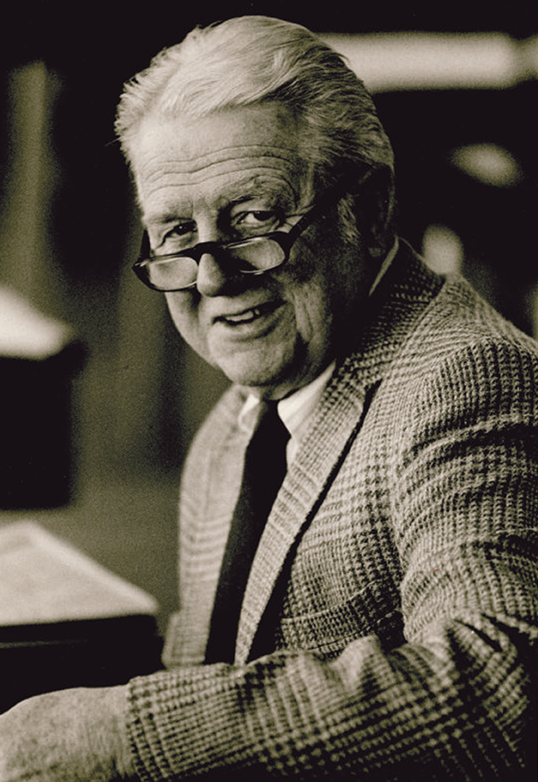 Joe Kelly stood on the press box balcony at Pimlico Race Course, his favorite place of worship outside St. Ignatius Catholic Church, and awaited the procession. Horses moved onto the track in cold and windy grayness, and the easy pre-race banter turned to foaling.

Joe said his had taken place in 1918, February, the year after Man o’ War.

“You turned 70 last month?” I asked. “You go on as if you’re barely through the clubhouse turn.”

“I’m farther along than that,” Joe said that late-winter day in 1988. “But I hope there’s still some ground to cover.”

By any figurative measure, few covered as much racetrack ground as Baltimore’s Joe Kelly. From his first $2 wager on a daffy upstart named Whirlaway, he spent the next 70 years as genteel writer, historian, pioneer, editor, organizer, publicist, philosopher and mainstay of the Maryland turf.

How vast was his span in deed and duration? In 1979, Pimlico presented Joe its Old Hilltop Award, a de facto lifetime-achievement honor for turf reporting. In 2000, Joe won it again.

He remained so vital so long that we wondered whether his biological track had a finish line. Into his 90s, his mind remained as agile, his silvery hair as present, his eyes as blue, his cheeks as rosy and unwrinkled, his heart as open.

Then last autumn, a blind-side: He’d lost his appetite, had a fall. Handed a grim diagnosis at 94, he died in the dark of a new day, Nov. 26.

Fifteen months earlier, the Mid-Atlantic Thoroughbred had planned a feature on the Laurel Park centennial and asked Joe if he felt up to writing a short memoir on its once-signature race, the International. Editors wished not to tax him and wondered what, if anything, he might deliver at 93. The answer arrived as six perfectly enchanting essays–on the lavish pre-race parties at Washington’s embassies, on a cuckoo clock given him by a German-based trainer, on the mystique of horses and connections from the Soviet Union, on his unlikely alliance with track owner John D. Schapiro, on his curious dealings with actor Mickey Rooney, and on Kelso’s three tantalizing International misses before his 1964 score.

One of Joe’s favorites, five-time Horse of the Year Kelso twice lugged 136 pounds to victory around two turns. Joe, in a sense, carried many of us a lot further.

During my years as president of the Maryland Racing Media Association, I managed to excite the group into an utter state of apathy, which begat a problem. Placement advertisements for the annual crabfeast program were funding MRMA’s $1,000 scholarship then; someone had to sell them. Joe, well into his 70s, singlehandedly served as ad man many years running, spending untold hours soliciting sales for a nominal commission.

“I’m glad to do it,” he said one year after nixing a higher percentage. “It keeps me in the game. Know what I mean?”

That was Joe. If he gave you a ride somewhere, he’d thank you for getting him out of the house. Part Father Flanagan, part Father Time.

Joe’s benevolence had been bubbling a half-century or more, since he’d graduated Loyola College in 1939. Before he made his way to The Baltimore Sun, he spent several years doing social work for the city welfare department. The goodwill never left him.

Joe had edited the Loyola newspaper and relished the challenge of running down a story, of distilling and presenting the material, of delivering on deadline. When the Sun advertised a staff-writing job in 1943, Joe winningly applied.

He began as a general news reporter, moved to sports after Snowden Carter became sports editor. In the bustling, smoky press rooms at state racetracks, Joe Kelly found his clackety-clack knack. His prose, like his manner, was straightforward and unaffected.

In 1946, Joe covered his first Preakness, starring club-footed Triple Crown winner Assault. The following April, he chronicled the racing debut of a Bull Lea colt who fought hard to win a four-horse photo at Havre de Grace. Citation was 8-5 that day against 10 other 2-year-olds.

Television, Joe thought then, was a petri dish of uncertainty in a newspaper culture. So he stayed behind the typewriter while McManus went before the camera. . . as Jim McKay.

Joe often laughed at the upshot with self-effacing candor. A wiser man, he said, would have drawn more from an odd encounter in Hutzler’s department store soon after the telecast. A woman on an escalator pointed to him excitedly and proclaimed, “I saw you on TV!” Joe spelled out the metaphor: She was taking the escalator up, he down.

Joe was a newspaperman from 1943 to 1981, absent the four years he spent as regional secretary for the Horsemen’s Benevolent and Protective Association. Frosty dealings between tracks and horsemen then, 1951 to ’55, put Joe’s office in a parking-lot trailer. It was conducive to moving, anyway, which the job required?–?to Pimlico, Laurel, Bowie, Timonium, Marlboro, Bel Air, Cumberland, Delaware Park, Charles Town, Shenandoah, Water-ford, Wheeling. Good pay couldn’t quiet Joe’s conscience: He was gone too long from wife Stew and their children (six in all), a break he had to fix.

So he put it in park and became racing editor, columnist and principal turf writer of The Washington Star for nearly 30 years, until the paper folded in 1981. “I was 63 and out on the street,” he deadpanned.
What happened next certified Joe’s fairness, integrity and universal regard. Wise to the Star’s shutdown, Laurel owner Schapiro offered Joe by unsolicited letter a position as track publicity director.

Philosophically, this was an oil executive bringing a job to a conservationist.

As a columnist, Joe at times had written critically of Laurel and its management. But Schapiro had seen truth within the barbs and decency within the source. Joe took the job.

The son of a civilian Navy man, Joe retained his buoyancy in restless seas. When Frank De Francis and the Manfuso brothers bought Laurel in 1984, Joe again made it ashore as publicity director of the Maryland Million, teaming anew with former colleague and longtime pal McKay.

In the late ’80s, Laurel and Pimlico looked to create a bona fide media guide and turned to Joe for historical narratives about the tracks and the Preakness. As a man, Joe exhibited the qualities his writings ascribed to those Triple Crown winners: durability, heart and class.

After one such meeting at Laurel, near another milestone birthday, I said, “Eighty, Joe? And you haven’t even cleared the backstretch.”

As the Maryland Jockey Club’s historical consultant, he broadened the job para-meters through innate goodness. Every Preak-ness and beyond, media types would make like gold diggers to his Pimlico office, mining Joe for information, leaving richer.

True to his time, Joe generally wore a sports coat and necktie (un-cinched), but his style ran deeper. He was dapper in character.

A careful bettor, he savored the cerebral challenge of handicapping, approached it with a marksman’s eye and a surgeon’s discipline. He kept a ledger detailing each day’s net outcome and honored a monthly horseplaying budget. One late-April day at Pimlico, he watched races without a trip to the window and didn’t dodge why. An unusually poor month had taken him to the limit. “Time to wrap up,” he said.

A win and exacta man who came to tame the self-service betting terminals, Joe typically tried to beat the favorite, bifocals low on his nose as he fathomed program data in the Pimlico press box lobby. In my 30 years knowing him, I never heard Joe raise his voice, even after a bitter pari-mutuel miss. At worst, he’d peer above his glasses and say, “That jock couldn’t find his way through the A&P,” meant more as a laugh than a knock.

Joe kept a jockey’s significance in perspective, saying a rider controls maybe 10 percent of a horse’s performance. So Eddie Arcaro told him.

In the spring of 2008, after a long winter at Laurel Park, we returned for the spring season at Pimlico. First stop: Joe’s office. He was typing, bright and vigorous as ever.

“More like deep stretch,” he said. “But I’m still scrapping.”

Even last spring, Joe regularly drove himself to Pimlico to do research, play horses, hobnob with friends, tab the industry pulse. Using a walking stick more for prop than need, he remained a giving, mobile repository of racing lore.

Belatedly, Congratulations to you and your team which accomplished the rewarding job, the two day Thoroughbred show, perhaps the best ever at Pimlico. In my long experience which goes back to 1946, it was the most beautifully presented Preakness.

With the landscaping, new trees, and flowers, Pimlico never looked more attractive, particularly on national TV. The track at age 142 looked like a showplace of Thoroughbred racing. It was like the racing stars of the past were making a guest appearance.

I believe Pimlico, despite its age, has a promising future. It remains a promoter’s dream, with its authentic historical background, located in a big league city where the U.S. National Anthem was created. I might be prejudiced but I would not trade Pimlico for any track in America. . .

As the consummate team player, he couldn’t help it, even late in his illness. When MJC communications director Mike Gathagan phoned the man he and others reverently called “Mr. Kelly,” Joe steered the conversation to more pressing matters. Joe asked Gathagan to look after the racing artifacts in his Pimlico office “to make sure they don’t fall into the wrong hands.”

By then, doctors had given him the hard news, and still he sought not to burden anyone. In my last conversation with Joe, he didn’t mention cancer; instead, he spoke the language born on that Pimlico balcony 24 years before.

“You’ve still got the whole homestretch ahead of you,” I told him.