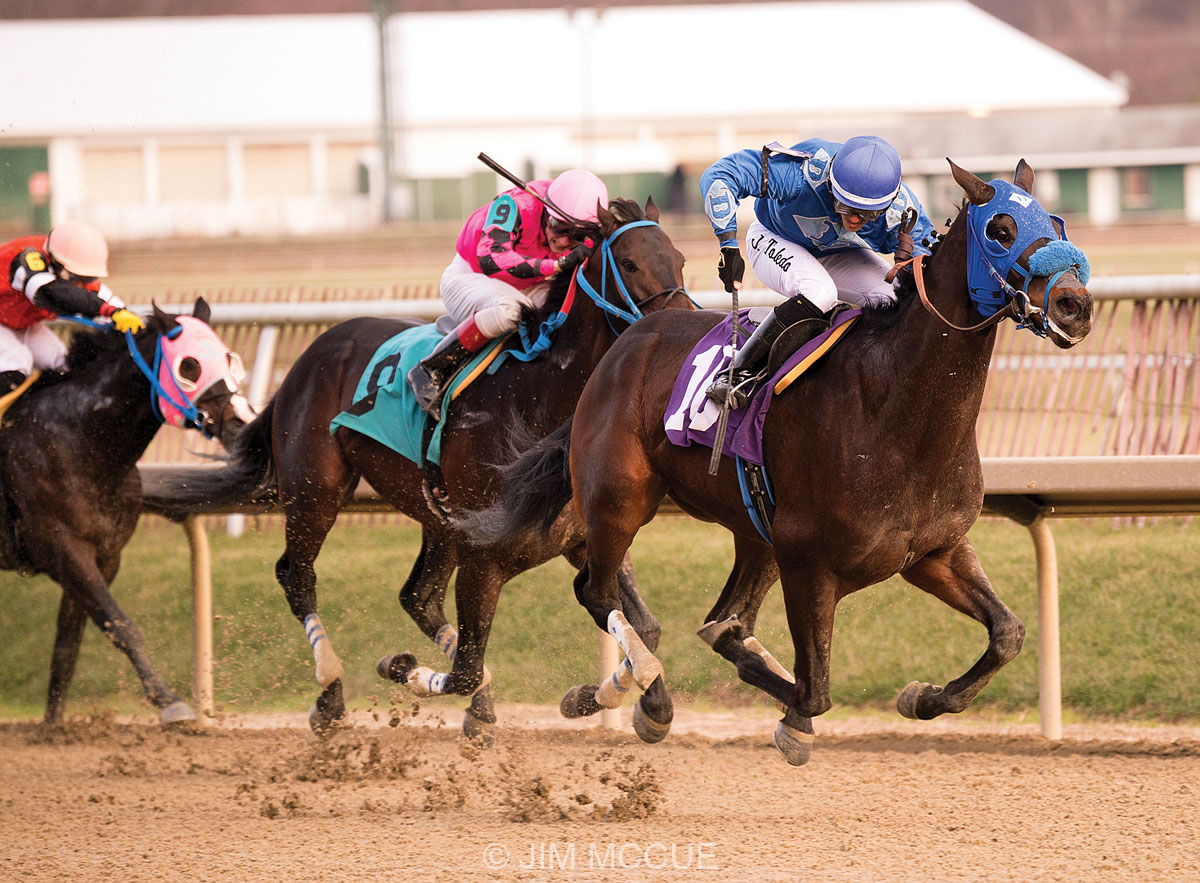 If there was one horse Matt Dorman wanted to win with, Sonny Inspired was the one. After all, he was more than just a horse. Sonny Inspired had become a living, breathing, fighting metaphor for a philosophy of persistence, for which Dorman named him.

Alas, there he stood in the Laurel Park winner’s circle Jan. 16. After so many wins and losses by noses, necks and heads, the embattled 5-year-old Maryland-bred gelding finally did it. Sonny Inspired won his first stakes, the $75,000 Fire Plug, in his 27th career start.
The check, of course, was nice. It wasn’t money?–?not even close?–?but rather that greater metaphor, that Dorman was thinking about in the moment.

As the co-founder and chief executive of Credible Behavioral Health Software in Rockville, Md., Dorman is a self-made success story. When he decided to dive headfirst into horse ownership in 2012, failure wasn’t an option, and he set a high bar for the horses brought into his D Hatman Thoroughbreds stable.

That fall, Dorman and trainer Phil Schoen­thal went to the Fasig-Tipton Midlantic Eastern fall yearling sale in Timonium. They made a list, checked vet reports, screened every possible inch of every horse they liked and agreed on seven that hopefully would come home with them. Then there was Hip 244.

While Schoenthal and Dorman worked together throughout the decision-making process about which horses to buy, they were at an impasse over the bay yearling out of the Silver Deputy mare Argentesque. Despite Schoenthal advising against buying a horse with a turf pedigree, Dorman made an executive decision as soon as he laid eyes on the horse.

Oh, and there was one more thing that sealed the $20,000 purchase. Since he was by Artie Schiller, he shared something with Dorman’s greatest influence in life, his father Arthur Dorman, who had passed away in 2012. The elder Dorman went by Artie for short, and was the one who introduced his son to racing years earlier at Bowie Race Track.

Horses were a shared passion and the track was an escape from the demands of the Maryland legislature, which Arthur Dorman served as a senator from 1975 to 2003. He was also a successful eye doctor who was once named the National Optometrist of the Year.
But none of it was handed to Artie, who some knew by another name. And there were stories about that name and his humble, and perhaps unlikely, beginnings.

“Sonny was my father’s nickname when he was in a gang in New York, growing up,” Dorman said. “He always raised me to believe that I could do whatever I wanted to do. In business, I’m fortunate that I’ve built a good team and I’ve been very successful and I always stress to people that you’ve got to have that vision, you gotta have that inspiration, you gotta have that persistence. . . So, that’s why I work it into my [horse’s] name.”

Given the impression this horse had made on Dorman and what would prove to be a headstrong demeanor, the name Sonny Inspired only seemed fitting.

Much like his namesake, the horse’s early days were a little bumpy. He was difficult to handle in the mornings and his first appearance in the afternoon resulted in an 111?2-length loss at Timonium in September 2013. Three weeks later at Laurel, he lost again but only by a half-length. Then, in his third career start, he won by a nose at Laurel.

Having broken his maiden by the slimmest of margins, Sonny Inspired set a precedent that would repeat itself throughout his career. He’d go winless over his next 11 starts, losing by just a neck or a head on several occasions.

When Sonny Inspired won three allowance races between late 2014 and early 2015, the margins were a nose, neck and head. Later in 2015, the gelding again went cold, losing seven straight races coming into the Fire Plug.

“The horse has shown some tendencies in the past to want to hang a little bit and wait on horses and maybe not want to win,” Schoenthal said. “We’ve changed his blinkers around a time or two. I pulled his blinkers off the previous two races and he did not run well either time. So, that was kind of a mistake. Trial and error. So, we went back to put blinkers on and I used a bigger, fuller cup, that we hadn’t used on him in the past.”

The new blinkers paid immediate dividends. The field for the Fire Plug shrunk to six horses after four scratches. One of the defectors was Any Court Inastorm, who was supposed to be ridden by jockey Jevian Toledo. Following the scratch, Toledo was named on Sonny Inspired, whom he’d piloted to three of his four previous career victories.

Toledo and Sonny Inspired sat off a hot early pace set by Jake N Elwood. While several others chased, Sonny Inspired appeared to be traveling comfortably throughout and surged to the lead when asked. Leaving the three-sixteenths pole, he took control and did something he hadn’t ever done before?–?he opened up to win by a full 13?4 lengths.

“It was really the first race ever that he kind of drove to the lead, widened the margin and actually ran away from the field a little bit,” Schoenthal said. “So it was really good to see him drive clear and hold sway like that.”

The moment was more than just nice, it was euphoric for Sonny Inspired’s small but vocal rooting party.

“I think Phil Schoenthal, my son and I were the only three people yelling for him when he was turning for home,” Dorman said. “I’m happy for him because he’s a tough horse. For him to finally get a stakes win is big and it’s exciting.”

Dorman, Schoenthal and the entire team behind the horse have grown sentimentally attached. He’s a favorite of Dorman’s sons Chase, 6, and Blake, 10, who was at Laurel to witness the victory with his father. Within the context of the paternal backstory surrounding Sonny Inspired, the moment was exceedingly special for his owner.

“[Blake] was excited to get the big cup,” Dorman said. “He knows Sonny. We visit him in the barn. It’s interesting, Sonny will be difficult and challenging to Phil but when the kids come around, he’s a great horse. He knows they’re kids. He plays with them.”

Having truly become a part of the family, the team has already given thought to what’s next for the horse, both on the track and off of it.

“He’s been a great horse,” Schoenthal said. “He tries hard every time. He’s just a cool horse to be around. He has a lot of personality. Looking forward to keep on campaigning him and at whatever point that he’s not going to be competitive in these upper-level races, we’ll go ahead and retire him and find him a new career. But he’s been a really fun horse and it’s been a fun ride so far.”