Details
Published: May 2016
Written by By Sandra McKee 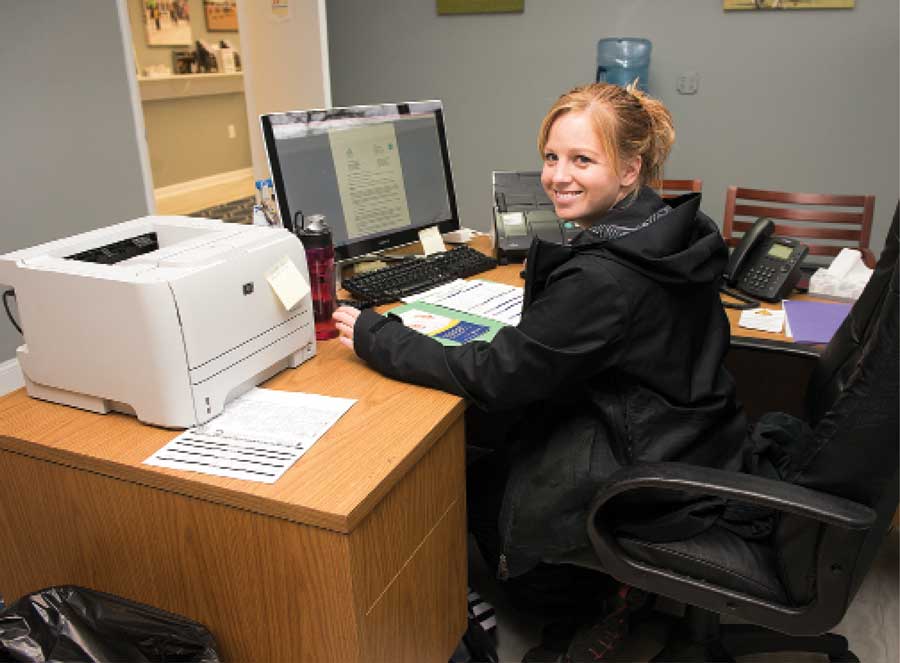 When 5-year-old Kelly Ryan used to come to the Maryland racetracks, she wasn’t looking for a job. She just liked petting the horses. Little did she know that several decades later she would be a MedStar doctor and one of the key elements in the new Horsemen’s Health System.

“When my dad brought me to the track as a kid–and even when we started this program–I had no idea people lived on the backstretch or what it takes to keep this place going,” Ryan, 31, said. “It has been a real eye-opening experience for all of us.”

Ryan is one of four MedStar doctors who make up the new Horsemen’s Health System medical team. Dr. Frank Dawson, part of the Baltimore Ravens’ medical team, is the director of the on-site program and staff that includes Ryan, Dr. Saif Usman and Dr. Jeffrey Mayer.

In place since September 2015, the Horse­men’s Health System is receiving rave reviews. Launched by the Maryland Thor­oughbred Horsemen’s Association, the Maryland Jockey Club and MedStar, the program had seen more than 250 patients in its first six months and treated everything from a common cold to head injuries suffered by jockeys falling from their mounts.

Newly designed office space at Laurel Park houses a modern, welcoming waiting room, examination rooms, and a new office area where electronic medical records are kept for the first time on backstretch workers, horsemen, jockeys and other track employees treated there. Those records are portable and accessible to doctors outside the racetrack in the MedStar system.

“Independently of me, MedStar [and the MTHA and MJC] sorted it out and came up with this program,” said John McDaniel, the Maryland Racing Com­mission chairman, also the retired CEO of MedStar. “I couldn’t be more proud. I’ve been through the facility at the track, seen the quality of the physicians and the reach of the program and it seems extremely comprehensive. . . I can’t imagine there being any better.

“What I like best about it is that it’s a preventive health plan. It’s not just resetting a bone; they’re doing comprehensive preventative counseling, providing primary care, taking care of people with long-term problems.”

Mike Hopkins, executive director of the MRC, called the individual record-keeping “tremendous.” He said the availability of doctors to see patients on a regular basis; the access to MedStar facilities for things that can’t be dealt with at the racetrack; the developing of doctor-patient relationships; and the electronic record-keeping all make the program a model for tracks around the country.

“Our employees know which doc will be there and when,” Hopkins said. “That means a good doctor-patient relationship can develop. The biggest thing, though, is it offers the backstretch workers a way to have consistency in their treatment for their ongoing medical needs, like diabetes and high blood pressure. Records are being kept. All of it adds to their well-being.

“I think nearly every [racetrack] provides what’s required–minimum care. But this goes way beyond that. It’s awesome. I really believe it should be a standard.”

While all four of the program’s doctors are trained in sports medicine and also can serve as the horsemen’s primary care physicians and offer access to MedStar’s advanced systems of specialists for continuing care, it is Ryan who is most often present and has garnered the biggest caseload.

She covers half the race days, while the rest of the staff members divvy up the rest.

The list of services provided by the MedStar doctors is extensive.

Since coming to the track, they have set up pre-performance physicals for jockeys free of charge and established a protocol for anyone–jockey or exercise rider–who falls from a horse during races or training sessions.

“Jockeys are a different type of athlete,” said Ryan. “We’re used to standing on the sidelines watching football players and soccer players, you know. Football players have joint problems, concussions; soccer and lacrosse players get torn ACLs and sprained ankles.

“Jockeys are very much athletes. They ride hard. Coming in, we weren’t sure what kind of injuries we’d see. We anticipated hip problems, but no one can imagine what a body goes through falling from a horse at 30-to-40 miles an hour and then getting up, walking away and after that being determined to get back up on a horse for the next race.

“They have concussions, fractures?–they’re probably tougher than any other athlete I’ve worked with. They amaze me, truly. I don’t think the rest of the world really knows how tough these jockeys are.”

And trying to keep them out of the next race could be more than problematic. Jockeys don’t get paid unless they ride. But Dawson says the feedback from the riders on the protocols has been very positive.

“There has been a level of trust developed very quickly between the riders and the physicians,” Dawson said. “They, of course, want to get back on the horses, but the level of trust has gone a long way toward the understanding that we have their best interest at heart.”

For instance, the MedStar team has worked hard to develop a concussion protocol.

Ryan said they had to come up with a test for jockeys besides a doctor holding up a number of fingers and asking how many the athlete sees.

“We had to be able to test their heart rates in a similar environment, make sure their blood pressure is normal so they will be safe,” Ryan says. “We saw the Equicizer, a mechanical horse simulator they ride in the jocks’ room, and incorporated that into our testing. We have to make sure they are going to maintain their balance in a stressful situation; make sure their vision remains clear, so they don’t get back out there and cause themselves and perhaps others even more serious injuries.”

The MedStar doctor on site does an immediate exam. If the jockey checks out, he/she is back in the saddle for the next race. If the doctor suspects something more serious than bumps and bruises, the jockey/exercise rider isn’t allowed back on a horse until he/she has received more testing and is given a clean bill of health.

The doctors maintain a posted schedule for regular visits on all race days and those schedules are posted at the Laurel and Pimlico track kitchens and outside the newly designed medical office at Laurel.

The offices are primarily based at Laurel Park, but will move to Pimlico Race Course during the spring meet.

In addition to the injury assessments, the backstretch workers, horsemen, jockeys and other track employees can receive vaccines for flu, pneumonia and tetanus. And a continuing care program is in full operation to monitor and treat chronic conditions.

MedStar even has a network doctor close to Laurel Park who is seeing patients who require more frequent monitoring than can be provided by the visiting doctors.

“We can keep track of people’s illnesses now,” said Diana Pinones, who serves as the center director for the program. “We can send them for bloodwork and whatever else they need. People actually have doctors they know now and the doctors can follow up with them. I call them if they miss an appointment.”

Pinones also is working to help backstretch workers and others to get qualified for Medicare and Medicaid.

“Some of them didn’t even know they could qualify for those insurances,” Pinones says. “Even the exercise riders, we sign them up for workmen’s comp. We help them. Before we didn’t even know who got injured.”

Now there are those portable medical records for each patient. While many see that aspect of the program as its backbone, Ryan said she believes the most important part of the program is the primary care they are receiving.

“This program is through MedStar sports medicine,” Ryan said. “We take care of the top athletes in Baltimore and Washington, D.C. Ours is an unmatched program, an unbelievable program–and I wanted to be in it.

“But I’m still a family doctor at Franklin Square Hospital. My training instilled in me the importance of community care. Being allowed to see and serve this community I see the needs these people have.

“This is a huge population who didn’t have much health care before we came. It is very difficult for them to live healthy,” says Ryan, citing the lack of access to grocery stores and fitness facilities. “On a moral level, I want to give them the standard they deserve. I just want to help them. And they’ve been so good about teaching us about where and how they live, educating us.”

Dawson, the program’s director, calls the program “a smashing success,” but says he wants to make it clear that while MedStar is providing services, it wouldn’t be getting very far without that cooperation and the trust of the racing community.

“It has been a wonderful experience for everyone,” Dawson said. “I want to thank the racing community for really accepting us. As much as we are providing services to them, they have been willing to educate us about racing and the horsemen’s community. It’s been really good for everybody.” 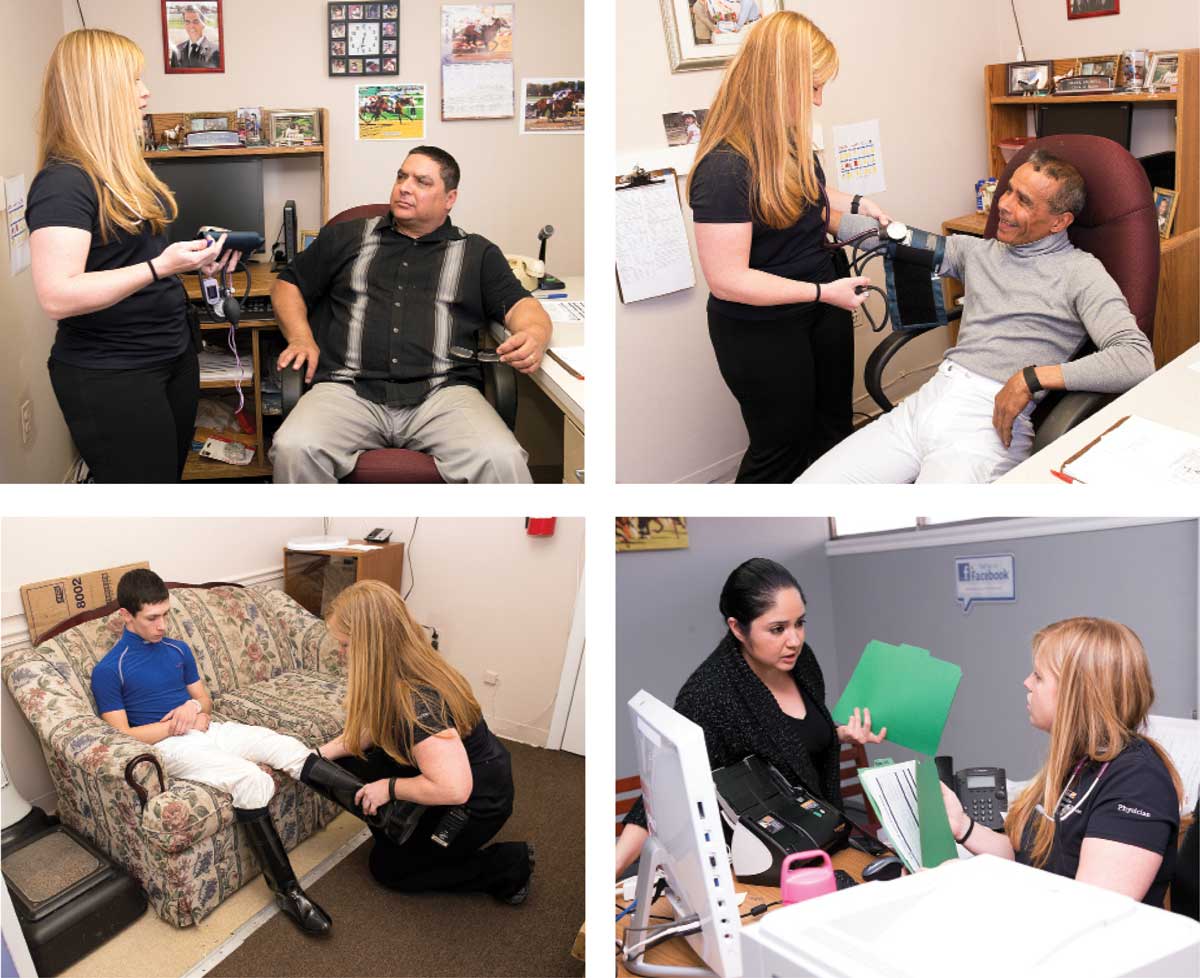