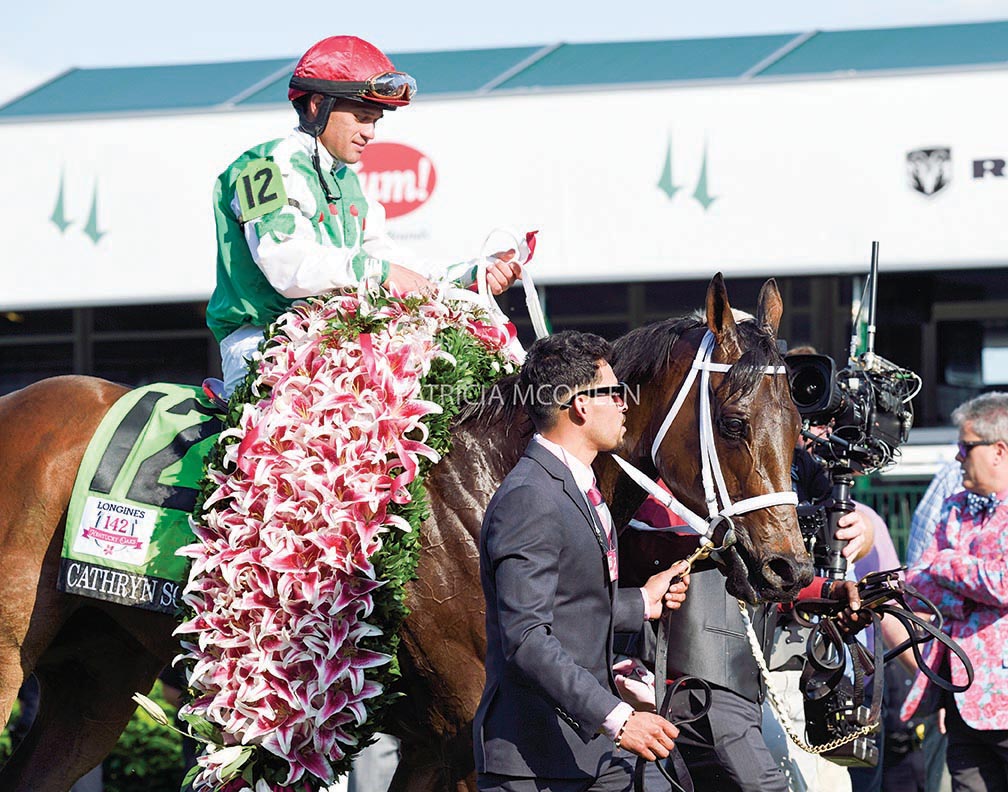 The young fillies at Chanceland Farm ripped and raced and ran, bolting from one end of the field to the other in a never-ending game of Who’s the Fastest? They ducked and dodged and dived, stopping to nibble some grass, sip some water, grab a nap in the sun or a roll in the dirt. Then off they’d go again.

All except one, anyway. She’d run for a while, then give up and just watch as her mates went this way and that.

“She was the lazy one out in the field,” said farm employee A.J. Hesketh-Tutton with a smile. “She would stand and watch all the other fillies. They’d run by her and she’d kind of follow behind them. They’d go back the other way and she’d follow. After about two or three times, she’d be like ‘I’ll just wait here. You’re going to come back.’ ”

A little more than two years later, she’s no longer waiting–and everyone else is watching her.

The bay filly grew up to be Cathryn Sophia, who became Chanceland’s most accomplished racehorse when she won the Kentucky Oaks-G1 at Churchill Downs May 6. Hesketh-Tutton runs the broodmare barn and cares for the young horses at the West Friendship, Md., farm and might be Cathryn Sophia’ biggest fan. After all, Hesketh-Tutton was there from just about the beginning–when the future Grade 1 winner was little more than a fuzzy, brown ball of energy with a penchant for sleeping with her tongue hanging out of her mouth.

Cathryn Sophia still flops her tongue, and is partial to letting it droop waaayyy out to her left when she runs (feel free to flip back to the cover for proof). Though the people at Chanceland had veterinarians look at their filly, there’s nothing wrong with her jaw, no genetic defect, no misplaced muscle. She just has a long tongue, and isn’t afraid to show it, even though she’s mostly dropped the habit around the barn.

“That was how she lived until she was 6 or 7 months old,” said Hesketh-Tutton. “She used to run around the field when she was a baby and she’d come back with this big wet patch on the side of her face from her tongue slapping back and forth. After we weaned her was when we started noticing it going back in normally. When she was 8 months old, she’d just stick the tip out through her lip.”

Whether it had anything to do with her development or not will remain a mystery. Cathryn Sophia grew up like any other horse at Chanceland. Owned by Bob Manfuso and Katy Voss, the 195-acre farm just over the hill from the Howard County Fairgrounds and bordering I-70 routinely produces quality horses who go on to success on the racetrack, in the sales ring, and at the Maryland Horse Breeders Association’s annual yearling show. The first Grade 1 winner bred by Manfuso, Cathryn Sophia took it all to an extreme.

“Everything with her was food,” Hesketh-Tutton said. “Food, food, food. She would graze in a little circle while all these fillies ran around in a loop around her.”
All that grass and growing up sent her to the yearling show in July 2014, where she placed second in her class judged by trainer Tony Dutrow. From there, she started under tack. It’s all part of the process. 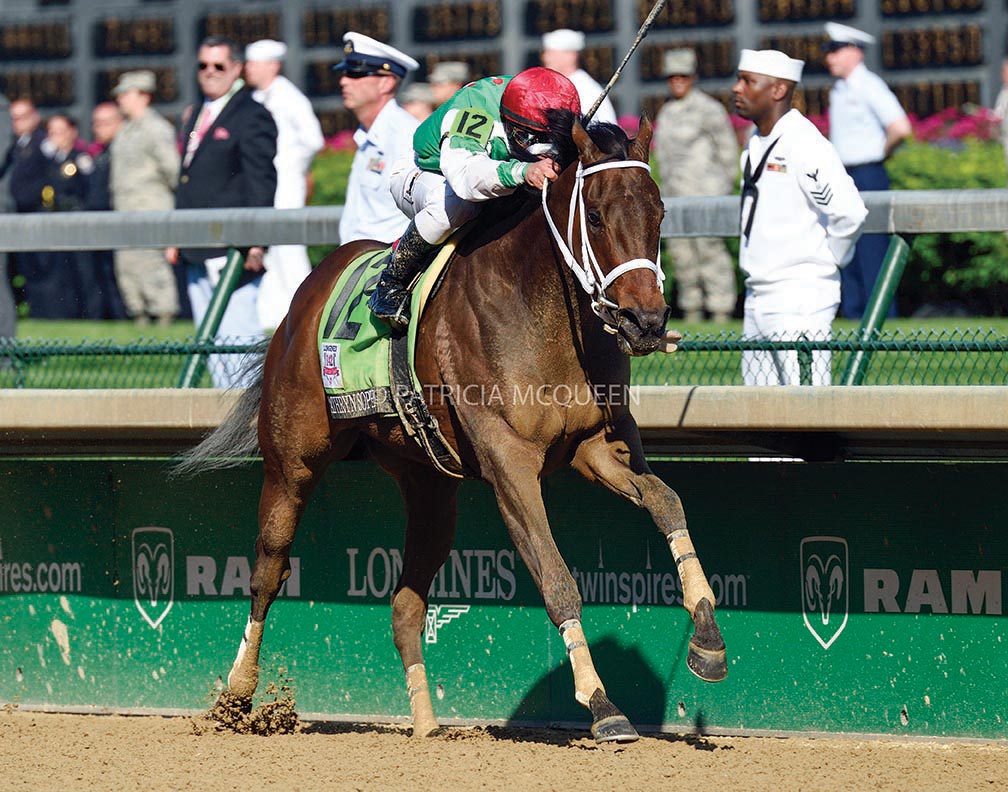 “We break them all, starting some time in July,” said Voss. “It starts [in the broodmare barn]. They get handled, they get brushed, they come in and go out every day. That’s the beginning. They know how to lead from a very early age.”

“You don’t ask a kid to go right to high school, he goes to grade school first,” he said. “You have to start when they’re babies and I think that’s critical. We put most of them under tack, but we don’t put any pressure on them. I just think it’s part of the education process.”

By October, Cathryn Sophia was in the Fasig-Tipton Midlantic yearling sale with a typically big Chanceland consignment. Chuck Zacney, who heads up the Cash is King Stable best known as the owner of 2005 champion 3-year-old Afleet Alex, spent $30,000 to get the daughter of Street Boss.

“She was a nice filly but it was fair value for what Street Boss was standing for then,” said Manfuso. “We go to the sale and try to be realistic. We put a fair value on the horses and if they sell, they sell.”

The first foal out of the unraced Mineshaft mare Sheave, whose dam Bel­terra won a Grade 2 stakes for Manfuso, was on her way. From Timonium, Cathryn Sophia (named for Zacney’s niece Cathryn McCarry, a soccer player at Rowan Univer­sity) went to Eisaman Equine in Florida and then to trainer John Servis at Parx Racing. The schedule slowed a bit while she grew through some issues, but Cathryn Sophia has been on a steady climb ever since: debut maiden romp at Parx in late October. . . Gin Talking Stakes win at Laurel in Park in December . . . two Grade 2 wins at Gulfstream Park in January and February. . . a second in the Grade 1 Ashland at Keeneland April 9. . . and then the Oaks.

After the Ashland, where she lost by two necks to Weep No More and Rachel’s Valentina, some questioned the filly’s ability to race beyond a mile. Servis briefly thought about the 7-furlong Eight Belles on the Oaks undercard, then changed his mind.

Thirteen days before the 11?8-mile Grade 1, Cathryn Sophia worked 5 furlongs in :59.60 at Keeneland. Without undefeated champion Songbird, who was pulled from the Oaks with a fever April 17, the race looked a little less daunting and a full field of 14 was entered.

Cathryn Sophia broke well from post 12 for Javier Castellano and sped alongside Rachel’s Valentina for the first furlong before sliding over a path and into the perfect stalking position–fourth, one off the rail, behind Terra Promessa, Rachel’s Valentina and Lewis Bay. Leaning into his filly’s neck, Castellano maintained a long hold up the backstretch through a half-mile in :47.87. Third after 6 furlongs in 1:12.60, Cathryn Sophia still hadn’t done any real running. She struck at the top of the stretch, tongue flapping with every stride, and built an immediate lead with only two late reminders from her jockey. She won by 23?4 lengths in 1:50.53. Land Over Sea rallied from well back to be second with Lewis Bay third.

At Chanceland and in the Tips restaurant at Laurel Park, where Manfuso watched, much bedlam ensued.

“I don’t have to say we got more than a little excited and the whole room, when she made that move on the far turn, just exploded,” said Manfuso. “You don’t count your berries too soon, but at the head of the lane I thought she was home free.”

Once a partner in the Maryland Jockey Club, whose stone-dust voice can be heard with a strong opinion in many a meeting, Manfuso called the victory far more than a personal achievement.

“I’m incredibly proud of the team, you’ve got to get the foals on the ground, raise them right and do all the work first,” he said. “It’s wonderful to have bred a Grade 1 winner, but what’s more important to me is you’ve got a Maryland-bred filly winning the Kentucky Oaks. The image it projects to the state of Maryland is very special.”

Four weeks before the Oaks, Hesketh-Tutton joked about what her reaction would be to a victory.

“You’ll find me standing on top of the barn screaming my head off,” she said. “She wooooonnnnn.”

Four days afterward, she stuck to the script and said, “I haven’t made it off the rooftop yet,” before halting an interview to get the mares and foals in before a rainstorm. Once the horses were secure, she explained what it felt like to watch Cathryn Sophia win a Grade 1.

“I ran around and jumped up and down and screamed,” she said. “As soon as she crossed the wire, my phone started blowing up with everybody who has ever seen her, ever worked with her. And it wasn’t, ‘Hello, A.J.’ It was, ‘Oh my God, she won.’ It was very exciting and everybody here was absolutely thrilled.”

Beyond the moment, Hesketh-Tutton was proud of herself, proud of the team at Chanceland, proud of the filly she calls one of her kids. Winning a big race was part of it, but the satisfaction of a job well carried even more weight.

“As any construction worker will tell you, the stronger the foundation the higher you can build,” said the six-year Chance­land employee. “I want to give them the best possible foundation, so they can go on and do everything they can do.”