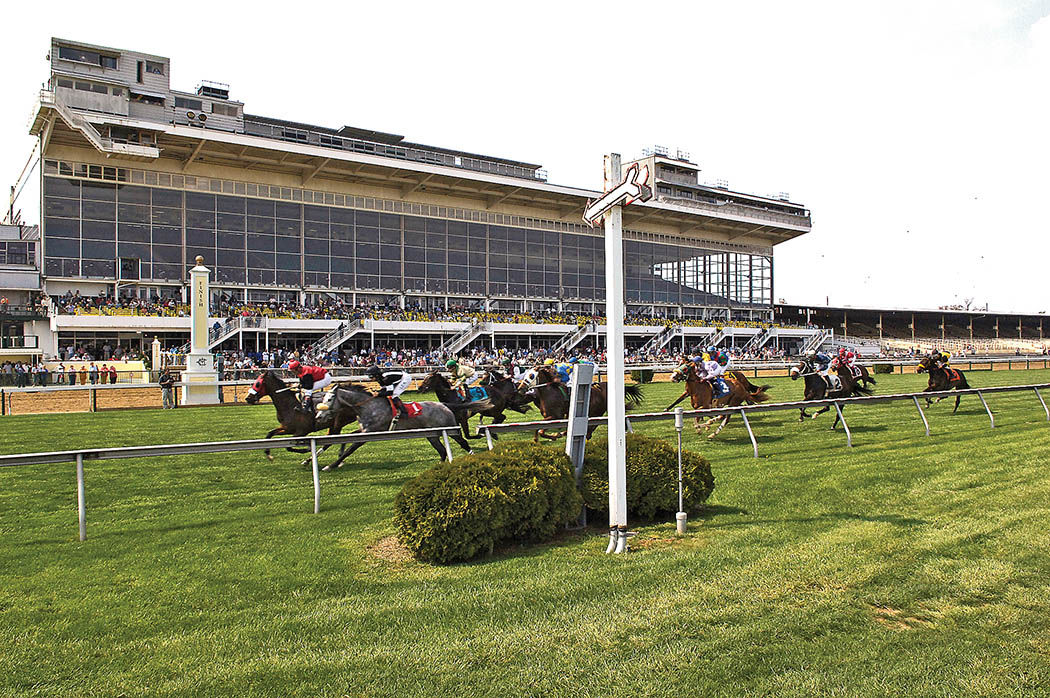 We found ourselves in the gloaming, the twilight often summoned by Bill Nack in his racing stories to represent the awareness of time passing that doesn’t seem like a real thing until you find yourself in it.

After the Woodlawn Vase had been presented for the 142nd Preakness Stakes, we hung around for the 14th race that followed because why hurry off from something you don’t want to see end?

Pimlico that afternoon had served up a classic, and in the days when turf writers weren’t football or basketball beat reporters slumming for a couple weeks, or general assignment naïfs using terms like “playing the ponies,” they would have written it straight into legend: The 2-year-old champion Classic Empire lured the Kentucky Derby winner Always Dreaming into a back-alley mugging, while champion jockey Javier Castellano loomed in the shadows on Chad Brown’s horse waiting to pounce on them both.

From an aesthetic standpoint, Cloud Computing’s victory in the Preakness was great stuff, but not quite great enough to allow those who care to forget that gnawing bad feeling they’ve had to deal with for yet another spring; that feeling that Pimlico Race Course is in deep trouble.

We took the rickety elevator that sometimes works down to the ground level and headed out the back door to the stakes barn. There, each year, when the sun goes down on the Preakness, the track throws a “secret” beer bash for backstretch workers, owners, trainers, jockeys, officials and anyone else waiting out the traffic. In the teeming mass, you might find anybody. This year, Brown and Castellano found the party and reveled goggle-eyed in the wonder of their victory. Brown had never won a Grade 1 race going long on the dirt, and now he had done it in an American classic.

Edgar Prado, dressed in an impeccable dark suit, circulated like a dignified and grand ambassador. Jockeys, valets, exercise riders, owners, sports writers and who knows who else milled around in a great spirit of camaraderie. It had everything but a bonfire and sing-a-longs. You don’t find this at the other Triple Crown races or any other tracks.

I stumbled into a couple young women with staff badges and we wandered over to the stakes barn and found warm welcome from Preakness starters Conquest Mo Money, Gunnevera and the nippy but friendly Senior Investment, all who enjoyed our affections. The barn foreman warned us about biting, but we exited intact.

When darkness arrived, organizers pulled in the beer tubs and the party broke up. Heading to the lots, we stopped and watched a few men struggling to get a big horse into a big van bound for Fair Hill. It was a luxury liner, but one horse didn’t want to go just yet, and I guess we didn’t either. The reluctant passenger stood still as a stone and then dropped his head and kicked. The men circled around and pulled the horse in by its tail after a final show of resistance. I stood and watched with racing writers Joe Clancy, Tom Law and another gentleman.

“Show’s over,” Law said, and we turned and headed home.

The Feld family closed Ringling Bros. and Barnum and Bailey circus this year, and when an American icon like that can go down, it’s not hard to envision Pimlico close behind.

The track dates to 1870, and its ghosts are summoned the Thursday morning before each Preakness at the Alibi Breakfast in the dining room. Here, the legend is retold again, about Yancey Christmas and Horatio Luro swapping stories on the porch of the old clubhouse in the 1930s, and the traditions are revived – the naming of the honorary postmaster, the bracing glasses of Black-Eyed Susans, the fried chicken and the horsemen’s alibis.

Pimlico gave racing the 2½-mile match race in 1877 between Parole, Ten Broeck, and Tom Ochiltree. The track also gave us another famous one between Seabiscuit and War Admiral in 1938.

It is home to the Dixie, the eighth-oldest stakes race in the country and first won in 1870 by the horse named Preakness. Pimlico is the track of Sir Barton, Man o’ War, Native Dancer and Deputed Testamony. The list of Preakness winners is the very fabric and memory of racing itself.

When Alfred Gwynne Vanderbilt II, master of Sagamore Farm, ran the place, he wanted Pimlico to be for the everyman despite his own lordly lineage.

“Since the first time I went to the races at Pimlico at the age of 9, I have had this wonderful feeling about racing,” Vanderbilt once said. “I don’t go to the races because I just love horses. It’s like the person who goes to the circus and falls in love with the whole show, not just the elephants.”

As racetracks across the country either redeveloped or died, Pimlico got left behind in its twilight world. It has no fancy suites, no high-end concessions. It remains a big, boxy anachronism in a part of Baltimore a lot of people don’t want to have anything to do with.

What Pimlico has, however, in abundance, is charm. The old Maryland racing writer and historian Joe Kelly said it was like a favorite pair of shoes in the closet –

Look at any video from this year’s Preakness Day, and the people are happy and Pimlico looks like a lovely time machine. Yet, it is continually denigrated, even by its own management.

“The glue, the bubble gum, the duct tape, seems to be working,” track president Sal Sinatra told The Associated Press on Preakness Day.

“This weekend will make for the Stronach Group probably around eight-, nine-million dollars. That sustains the rest of the year, basically, but to get where we’d like to be and have the nice facility and actually make close to what Churchill [Downs] is making [on the Kentucky Derby], that would make everyone more whole.”

Yet, Pimlico is not Churchill Downs, and the Preakness, since the days of Vanderbilt, has always been more of the people’s race, for the hoi polloi. The horsemen like the way they’re treated at Pimlico. They like the relative smallness, the personable nature, the quaintness of the Alibi Breakfast. It’s the classic race conducted on a human scale.

A move to Laurel Park would end the party, particularly in the infield, because Laurel’s has a lake. It’s a home to bald eagles, and sits atop a floodplain. Prices would go up. The all-in-it together nature of the Preakness would be stratified by wealth. The scale of everything Preakness Day would change as the smaller facility would be maximized for luxury and exclusivity and aimed squarely at the rich. Yes, the Stronach Group would likely make more money.

In 2003, Frank Stronach told the New York Times, “How can you move history? We intend to restore Pimlico to a world-class facility when the time is right. Slots are not the final answer, but it will help.”

Slots revenue arrived for the Maryland tracks, but all the money has been poured into revitalizing Laurel.

The work done there has been nothing short of astonishing and has brought a moribund track back to life. A grand vision with mixed-use development on an adjacent property, a new commuter rail station and perhaps a Breeders’ Cup are part of Laurel’s future.

Pimlico, meanwhile, lingers like a forsworn death-row inmate, while the heartsick lovers of the old city track watch and wait, and the neighborhood that could use the help is left behind.

We get it. The track is old, not necessarily a priority for anyone and in need of a major overhaul which may never come. We read the studies, understand the various interests involved, realize the long odds and the passage of time.

So, when the Preakness ended this year and the celebration died down, we found ourselves not in the glow of joy, but in the uneasy gloaming, and it was easy to understand why some people are still afraid of night falling.

Eclipse Award-winning writer John Scheinman is a contributor to several publications, and a longtime fan of Pimlico Race Course