Big Job: Lillis steps in, stands up for backstretch community

Bobby Lillis may be physically small, as he measures just 60 inches. But he stands tall and, like Secretariat, he has an outsized heart.

Most days, he sits at his aging desk in a cramped office inside the building that houses the backstretch cafeteria at Laurel Park. He has two titles – executive director of the Maryland Horsemen’s Assistance Foundation (MHAF) and director of benefits for the Maryland Thoroughbred Horsemen’s Association (MTHA) – and his door is always open.

Ask him, “What do you do here?” and you expect a long answer. But Lillis, known for his letters to the editors of The Baltimore Sun, The Washington Post and to Maryland’s sitting governors in support of horse racing long before he was recognized for his work with the MHAF or MTHA, keeps it short.

He makes it sound so simple. And people who see him in his office or walking around the track probably think what Lillis does is simple. But the problems he solves are life’s problems. Such as helping backstretch workers with their needs.

He handles what he calls living essentials for the MHAF; with the MTHA, he handles health issues.

Through those organizations he helps backstretch workers pay their rent or electric bills. When they are ill or between jobs, he sets up tabs for them in the kitchen so they can get something to eat for a week or two, until they’re back on their feet.

He helps them with medical bills they can’t afford, letting the paperwork sit on his desk for a month, six months or a year. Then he negotiates with doctors and hospitals, wheedling those bills down by as much as 50 percent, to a figure his umbrella organizations can handle. 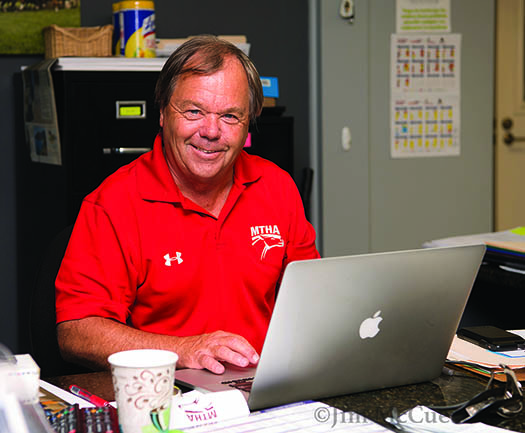 It isn’t always easy and it isn’t always comfortable. When a man or woman walks through his door, Lillis is sensitive to the uneasiness.

“When a person has been hurt or sick and they have a hard time making ends meet, it’s embarrassing for them to walk through the door and tell me they need help,” Lillis says. “It’s equally as awkward for me to ask them, ‘Are you broke?’ Not everybody understands that, but we get through it.”

His visitors may not initially know it, but Lillis is one of those rare individuals in a job who can say to the people he helps, “I understand,” and really mean it.

“I am actually who I serve and who I help,” he says. “I’m actually one of them, OK? So I know firsthand what they’re going through. . . And I tell them, when they come in here and they’re kind of shy, and I stop them. I tell them who I am. That I’ve been through it, and I am one of them. And then I say, ‘Sit down. Let’s talk.’

“There is nothing better than watching a person walk out of my office with a smile on his or her face.”

Lillis, 64, never saw a racetrack until he was 15 years old and a sophomore at Madison High in Madison Heights, Mich. That’s when his mother and stepfather came home from Detroit Race Course one afternoon and his stepfather said, “You know, you could be a jockey.”

The next weekend, they took him to the track. He was mesmerized.

In awe of the horses, the colors, all of it, Lillis declared, “Yeah, I wouldn’t mind doing that.”

Not long after, he was working on the backstretch, walking horses and mucking stalls, living in a tack room and walking the mile to school to continue his education.

He started as a hotwalker in 1969, and advanced to groom, exercise rider, jockey, breeder, owner, parking lot attendant, security guard and maintenance man before he finally arrived in his current position 20 years ago. It was a long, sometimes uneasy road.

Lillis got his chance to ride in 1975, at Michigan’s Hazel Park, which recently closed. The next year, he got married and moved to Pimlico Race Course.

“I wasn’t really blessed with an outfit to ride for,” says Lillis. “That’s not a good thing, because I was having to take second and third calls to a lot of different riders. But I was able to carve out a living.” 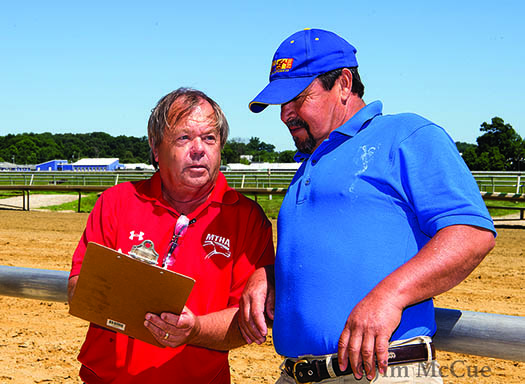 In 1980, Lillis split his time between exercising horses at the track in the morning and working for the Maryland Jockey Club in the track’s parking lots during the afternoon.

He and his wife, Ruthanne, eventually settled in Westminster, Md., on a 3.5-acre farm. They raised their children, Ryan and Sean, there and life was good, until one day, in the summer of 1997, while exercising a horse named Talk at Pimlico for trainer Lou Bernier, Lillis took the worst spill of his life. Talk tripped on a bandage that had unraveled from his front leg and landed on top of Lillis, who suffered a severe concussion and had bone fragments in his wrist that cut into his ligaments.

“The ligaments were shot,” Lillis recalls now. “The doc said I wouldn’t have the strength in my right hand or wrist to control a thousand-pound animal going 35 miles an hour. So, with that concern for the safety of others, I chose not to ride anymore.”

It was a difficult time. Lillis needed rehab and time to recover from his injuries, and, suddenly, he was down to one job, parking cars.

“It was an absolute nightmare,” he remembers. “I had to refinance the house because money was really getting tight with only one income.”

While he was in rehab, he read that John Paterakis sought to put a slots parlor 10 minutes from Pimlico in Fells Point. That’s when Lillis started writing letters.

“I just thought a slots parlor 10 minutes from Pimlico would be the end of horse racing,” he says. “I wasn’t the only one who felt that way.”

At the time, racing columnist Jack Mann wrote in Mid-Atlantic Thoroughbred in 1998, that Lillis was “on a mission” to be racing’s Thomas Paine (political activist), Johnny Appleseed (publicist), Henny Penny (worrier; “The sky is falling”) and trying to be “the ghost of things to come” (Jacob Marley) for the racing industry.

Later, when he had concerns about “lifestyle issues” on the backstretch, Lillis started going to MTHA board meetings in hopes the organization could address his concerns.

“But I realized quickly that there were a lot more crises and a lot more problems that the MTHA is dealing with than, you know, Bobby Lillis having a problem with [living conditions] on the backstretch.”

Lillis kept going to the meetings though, and also tried to organize the backstretch workers into a group called BEST, Backstretch Employees Speak Too. “But I could never get it off the ground,” he says. “I wanted us to have monthly meetings to address problems.”

Twenty years later, the MTHA, under Executive Director David Richardson, is working hard with Lillis and his coworkers to improve the living conditions Lillis has cared about for so long. But back then, his voice stood out.

MTHA board member Richard Meyer, who also was involved with the MHAF, noticed Lillis’ interest and ambition and stopped to talk to him in the parking lot one day. He asked if Lillis would be interested in a job with the foundation.

“It was this job,” Lillis says, smiling. “It was exactly what my goal and mission was and is, to help take care of the less fortunate on the backstretch.”

It has been the best fit Lillis or the organizations he works for could have imagined. It’s been good for him and for the people he serves. He operates the Maryland Horse Racing Industry page on Facebook, promoting the sport, with daily updates on racing news within the state. And even before the MTHA and the MJC worked to create a health program for backstretch workers second to none in the country, Lillis had established Walmart and Sam’s Club presciption plans for those workers.

“Bobby is a shining example of what is right with this industry,” Richardson says. “He’s a tireless advocate for the welfare of all horsemen, but especially the little guy. We are proud to have him on our team.”

Lillis is humbled just to be there.