Francisco Torres. The name might not ring an immediate bell, but anyone who has visited Northview Stallion Station will recognize the face. Torres, stallion manager at Northview’s flagship Chesapeake City, Md., location, is usually the man on the end of the shank when the stallions are paraded for inspection.

It’s what he doesn’t do that makes him memorable. 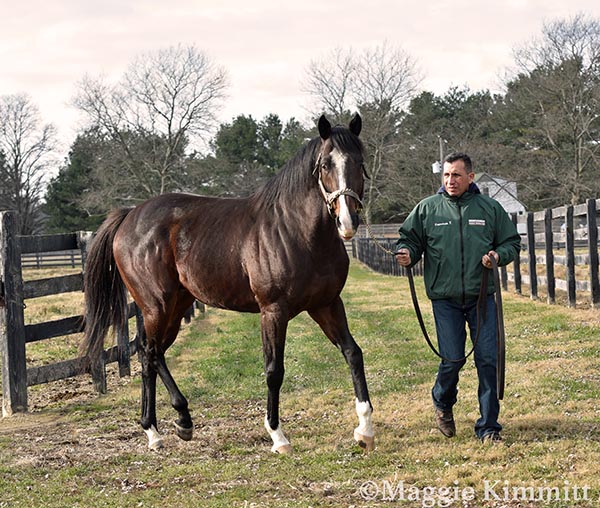 Regardless of the horses’ behavior –

rearing, striking, plunging, trumpeting –
Torres remains zenned out, barely seeming to notice. His quiet demeanor and effortless control hide that he has not spent his lifetime in the Thoroughbred industry. Oddly, an experience with cows assured his future at Maryland’s premier breeding facility.

Growing up in a small town in Mexico’s state of Puebla, Torres would rise early each day with his father to help milk the family’s dairy cows.

“We had no car, so we would go out at 5 a.m. and saddle the horse – or mule – and it was a 45-minute ride to a little field that we had outside of the town where the cows would be,” Torres said during a visit in December. “We fed them and then milked them by hand, filling the five or six metal buckets we had. Then we would carry the milk back home. My mother used to make cheese and cream.”

Married at 21, Torres moved wife Maria Louisa and their two small children to Colorado seven years later. A childhood friend was then the kitchen manager of a small café, and offered Torres a job which also provided housing.

He lasted a month.

He liked working outside, with animals, doing physical work the way he grew up. So he made a phone call. Some cousins lived in Delaware and they found Torres a job loading milk trucks at the Hy-Point Dairy in Wilmington. Another childhood friend, Jose Alfredo, was working as a groom at Northview. When he learned Torres had settled nearby, he mentioned that the farm was looking for help.

“Jose’s father and my father were compadres. We both grew up milking cows and riding horses,” Torres said. “He was needing a person for part-time here on Saturdays and Sundays, so I came over. This was around 1999-2000. They gave me one night each weekend in the foaling barn. The first or second week we had a foal, and I had pulled so many calves so I knew what to do. The broodmare manager saw me doing that and asked me to come to work full-time.”

At that point, Torres’ son Francisco Jr. and daughter Edna were in the middle of their school term in Delaware. Once summer break began, Torres relocated his family to a home on the Northview property.

Like all new farm employees, he started at the bottom. Mucking stalls and farm maintenance quickly led to grooming, and it wasn’t long before management noticed – and rewarded – Torres’ hard work and aptitude.

“Anything they would ask me to do, I would do it,” he said. “I moved to the stallion barn in 2012. They did let me handle the stallions, but I was not in charge of the barn. I earned more and more responsibilities. When a couple of guys quit, I said ‘Just let me show you that I can do that.’ ”

Torres has handled several of North­view’s top stallions. Perennial leading sires Two Punch and Not For Love became household names. Multiple Grade 1 winner Waquoit was the first stallion syndicated for stud duty at Northview when the farm opened in 1989. All three are buried in the farm’s cemetery.

Consider Torres like an NFL coach. Each breeding season sees returning big-name veterans, up-and-coming young turks and promising rookies arrive. North­view’s starting quarterback is Great Notion, Maryland’s leading sire in 2018. The 19-year-old son of Elusive Quality has sired at least one winner on Maryland Million Day for nine consecutive years. But his debut at Northview in 2005 was inauspicious at best.

“We did have a lot of work with him when he first came in because he was very shy,” Torres said. “It could take us two hours in the shed with one mare. The mare would be ready, and he would be like . . . nothing. If a bird flew into the shed, he’d be looking all around watching it. After he started to figure it out year after year, we had no problems. Once in a while though, every year, that horse will still do that. For a week or two each year, he will make you want to pull your hair off your head.”

These days, Great Notion is given a pass on his occasional mood swings. The sire of ultra-consistent runners Ruby Notion, Talk Show Man, Phlash Phelps and Crabcakes has earned the right to call the shots every now and then. 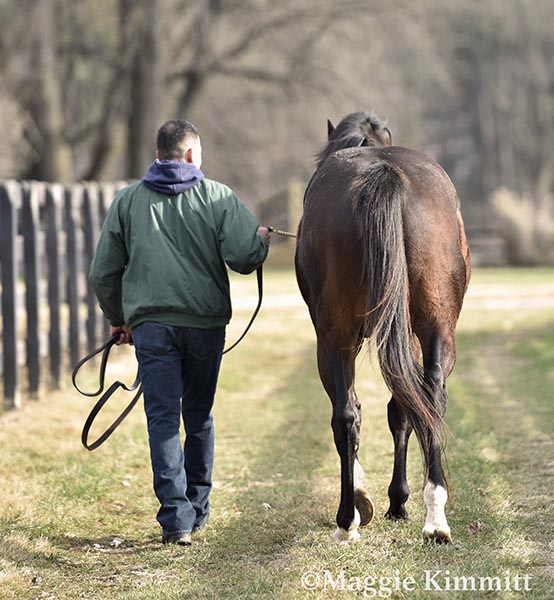 Six stallions stand with Great Notion at the Maryland location, with an additional six at the Peach Bottom, Pa., facility. Although based in Maryland, Torres has spent time with the Pennsylvania team to establish a program and train new personnel. Farm owner Richard Golden always keeps a keen eye open for young sires.

“Mr. Golden always tries to keep the farm going with the best stallion prospects,” Torres said. “He has always been trying to help Northview help the horse industry. It is always on his mind to bring in something new.”

Torres has had something new to indoctrinate nearly every year since 2013, when Redeemed joined the roster. The 11-year-old bay won from 6 furlongs to 1½ miles and earned $832,140. But Redeemed holds the title of The Spooky One.

“He’s always worried about his own shadow,” Torres laughed.

New in 2014 was Buffum – The Cranky Clown. The only stakes-winning son of Bernardini in the Mid-Atlantic region was a $1.2 million Saratoga sales yearling whose first crop included 2017 Maryland Million Nursery winner Clever Mind. Buffum feigns grouchiness in a never-ending quest to entertain.

“He’s like a child – he’s playful and does crazy stuff, like sharpening his teeth on the bars of his stall,” said Torres, who can also shift gears to sound like a pedigree expert. “I love his female family.”

Bandbox joined the squad in 2015 and his first crop included 2018 Maryland Million Nursery winner Follow the Dog. The 11-year-old son of Tapit is North­view’s bottomless pit.

“He eats everything he can. If another horse has left his hay, Bandbox will eat it all,” Torres said.

Golden Lad and Madefromlucky are the young players on the squad. Nine-year-old Golden Lad, a son of Medaglia d’Oro, entered stud in 2016 and will have his first runners this year. A Maryland-bred daughter sold for $120,000 at the Fasig-Tipton Midlantic fall yearling sale in October, the sale’s highest price by any first crop sire and co-highest (with Great Notion) for a regional sire.

“It looks like people are liking his kids,” Torres said. “I like the foals a lot too; nice size, good looking horses. We hope for the best for them at the races in 2019.”

Madefromlucky was new to Northview for 2018. The son of Lookin At Lucky and Home From Oz (a full-sister to leading sire Tapit) earned more than $1.3 million on the track and gets another chance to prove himself as his first foals arrive this year.

Torres is enthusiastic about the newest farm resident. Irish War Cry, 5, may as well be a local. He spent much of his racing career at Fair Hill Training Center 20 miles up the road. He was foaled in New Jersey, just like his dam Irish Sovereign and her dam Irish Genius. And Polish Numbers, sire of Irish Sovereign, stood at Northview.

“The interest in Irish War Cry has been very good. We had an open house in November and it was very crowded…more people than we’ve had the last couple years, and that’s interesting,” said Torres. “Some people who haven’t bred to us in a while are coming back again. I’m glad they kept him here in this state. It’s good for the clients, good for the farm. There was already a lot of interest in Irish War Cry because he was based here at Fair Hill. I think that a horse with local connections brings people here.”

Irish War Cry has adjusted to his new schedule. Typically, Torres will gradually introduce outside activities to a new stallion, beginning with hand-walking and leading up to paddock turnout once the horse is fully acclimated.

“We feed the stallions at 3 p.m. each afternoon, and the night watchman will feed them at 3 a.m. So when I come in to work at 5:45 a.m., they’ve had their breakfast and they are ready to go outside,” he said. “I clean the stalls. We have trucks to fix, tractors to clean, fans to fix, waterers to clean . . . all the maintenance.”

With pre-season at an end, Torres and crew are gearing up for the January start of foaling season and February’s return to the breeding shed. Mares have been under lights at Northview for several weeks.

“We have a good crew working in the shed. They have been here for years, and we have been recognized for the job that we do. We normally have four people for each breeding,” said Torres. “Sometimes you can do it with three, when you know the mare is good or she’s not a maiden. A stallion can breed three times per day, but usually they only breed morning and afternoon. We have a session at 9 a.m. and another one at 2 p.m. If we do have a third one, it’s at 7 p.m. If we get a call saying a mare is ready to be bred, in an urgent situation, we can do it. That spot is there if we need it. We all work together like a team, a family. We depend on each other.”

One member of the team IS family –
Francisco Torres Jr., now 26. He earned a degree as a translator at Cecil College but works and lives at Northview until a job in that field becomes available. His sister Edna, 24, also graduated from Cecil College. She had an internship at Walt Disney World and then completed her four-year degree at the University of Maryland. She works in marketing in Washington, D.C.

Maria Louisa Torres runs the household and dotes on her husband and son. Meals are ready and waiting when the two come in from work. Torres beams when speaking of his wife and children.

“I’m blessed with my family. I have a nice wife, nice kids, a nice place to live. I go to church with my family every Sunday in Wilmington. I love what I do and where I work.”

That is evident in his devotion to his career and the esteem with which is he regarded by his co-workers and Northview management. Employees aspiring to work in the stallion barn want to learn from the best.

“A lot of people deserve the oppor­tunity,” said Torres. “I’ve seen guys that follow what I do. A lot of people say to me ‘You make it look so easy . . . how do you do that?’ I say ‘I don’t know, it’s just coming from God.’ I thank everyone I’ve met over the years, from the grooms, clients, owners, managers. I’ve learned something from every single horse and still do. You never stop learning. You have respect for the horses and they will respect you. They are really intelligent animals, and I think they know you before you know them. Horses teach you loyalty and friendship. No judgment.” 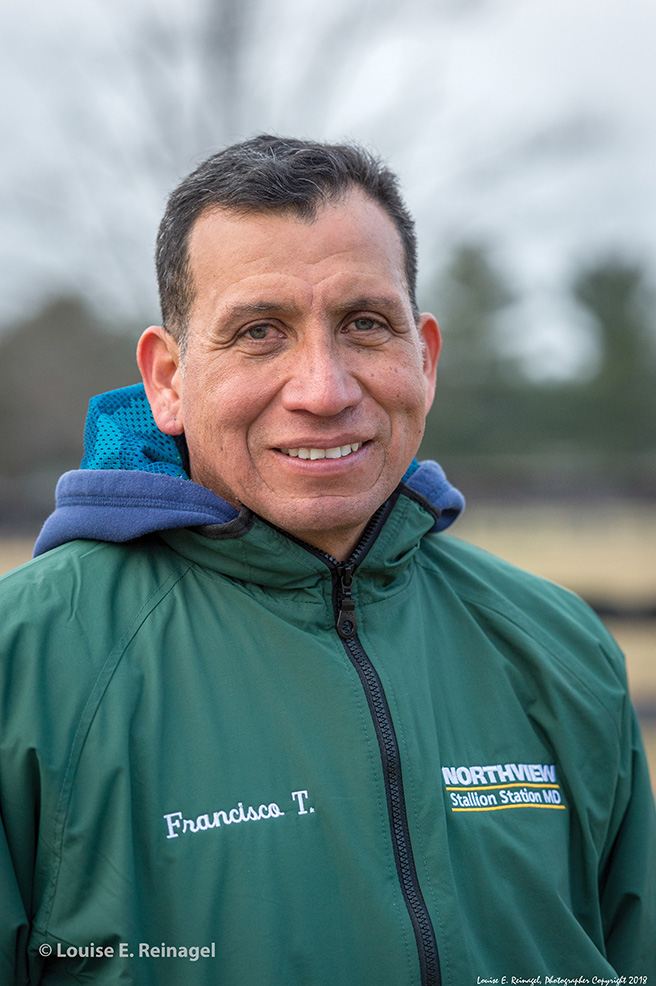